At CES 2021 we saw that gaming laptop makers at last seemed to start embracing AMD Ryzen processors in new products. The likes of Asus and Lenovo didn't hold back in introducing AMD CPU packing portable gaming powerhouses across many lines, but other like Gigabyte, HP and Dell largely stuck to old loyalties – Intel CPUs. In January Intel had yet to launch its range of high-performance 11th Gen Core chips for laptops, they only arrived earlier this month – so partners stuck with 10th Gen Core parts or used the new ultraportable laptop targeting 4C/8T Tiger Lake H35 chips.

Now Gigabyte has launched a new range of gaming laptops, its first based upon AMD Ryzen processors, and it is a mid-range line called the A-Series. Drawing a parallel to the existing G-Series, the A5 is a 15.6-inch screen based design, and the A7 is built around a 17.3-inch display. As these laptops are created as a mid-range series, the GPU options max out at a GeForce RTX 3070 laptop part. CPU options aren't so restricted, as the 8C/16T AMD Ryzen 9 5900HX with Radeon Vega 7 graphics, one of AMD's best laptop processors, features here. Gigabyte had prior experience of cooling hot and powerful Intel/Nvidia systems so its WindForce cooling system here (with twin fans, five heatpipes, and triple vents) should be up to the job. 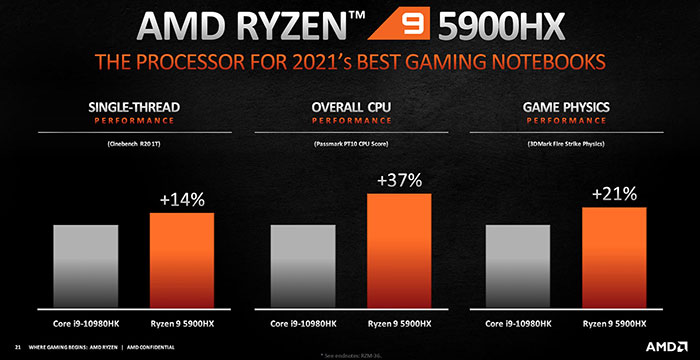 A pleasing feature of the A-Series laptops, as highlighted by Gigabyte, are their triple display output ports. This means you can create various multi-screen setups with ease, up to 1+3 multi-display. In this locked down world with continuing WFH pressure, the multi-screen option helps broaden the appeal of this 'beyond gaming' laptop as a good choice for office multitasking and content creation. 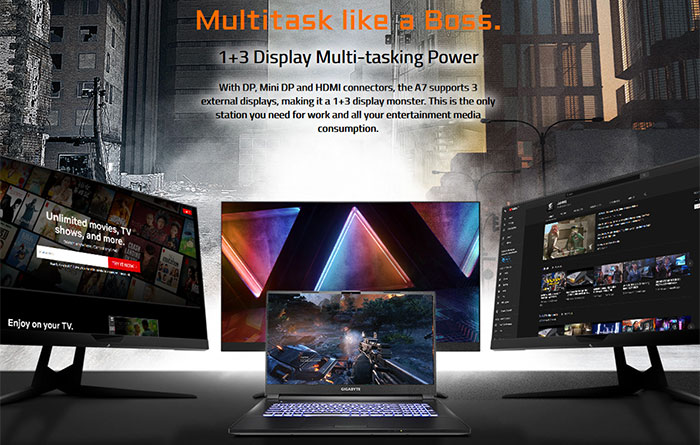 Gigabyte's chosen 17.3-inch panel is an FHD 'IPS-level' LCD with anti-glare coating. In terms of performance it is capable of 144Hz, while offering a gamut of 72 per cent NTSC. Another obviously budget choice is using the single-zone backlit keyboard (15 colour choices)

Other specs worth mentioning are the twin DDR4 slots for up to 64GB of DDR4-3200 RAM. Storage options are pretty wide with room for a 2.5-inch 7mm thick SATA drive, as well as twin M.2 2280 slots on board. As well as the multiple screen connectivity options mentioned above, there are plenty of USB ports, audio I/O ports, and an Ethernet jack. WFH comms should be adequately catered for by the built-in HD webcam, microphone, Nahimic 3 7.1 virtual surround sound, and twin 2W speakers. The Gigabyte A7 measures 396 x 262 x 32.4mm - which is quite chunky, but it weighs a modest (for a 17-incher) 2.5kg.

For the time being it looks like the Gigabyte A7 is the first A-Series laptop being made available. It is the only one with a spec list in the press release or to be listed on Gigabyte's gaming laptop product pages, at the time of writing. I don't have any MSRPs for the Gigabyte A7, or the lesser-detailed A5.

Posted by Core2Extreme - Thu 27 May 2021 15:46
One obvious question is “what does IPS-Level mean?” Does that mean “VA, but not many people know VA so we're calling it IPS-Level”? Or “an above-average TN”? I see MSI has used the same term, so perhaps there is an answer.

Could be worth consideration though. One of my mates has an MSI with a 2080 that sounds like a helicopter under load and still throttles; I'd prefer this Gigabyte if its cooling is better, even if it's thicker.