You are here:
Laptop Industry News

On Friday Intel held a closed doors presentation to a selection of analysts and journalists. The purpose of the presentation it seems was to convince the assembled that Intel laptops were superior to AMD-powered alternative as they perform considerably better when unplugged from the wall. In other words, AMD is basically accused of running its processors at full tilt when on mains but drastically reducing performance on battery to achieve great battery life results. 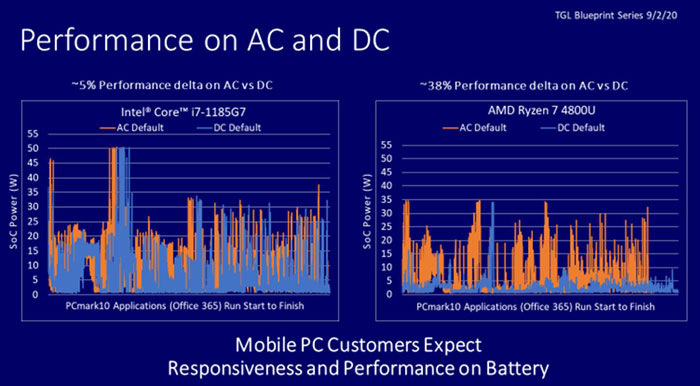 Cutting though the smoke, Intel's presentation was assessed and was found wanting by veteran tech journalist Joel Hruska of Extreme Tech (and PCMag and Ars Technica). Hruska's article takes Intel's assertions about AMD mobile CPUs and he turns the presentation findings around to accuse Intel of spreading FUD about supposedly huge Ryzen 4000 performance drops on battery. He backed up his rejection of Intel's findings, which were already suspect, with some tests of his own – obviously not cherry-picking for Intel's benefit. 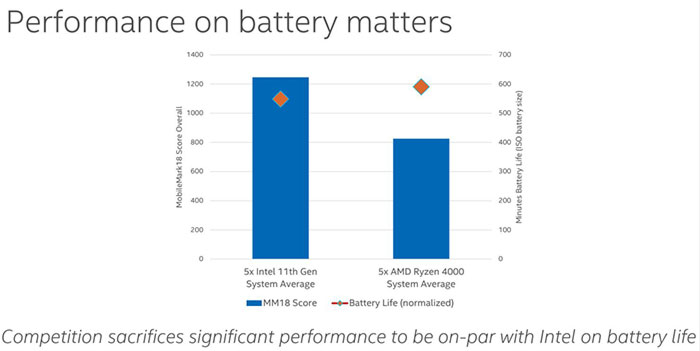 Intel's presentation slides are very interesting to pore over and surface quite a number of comparisons where its own processors do indeed look like the better choice for mobile computing. However, the doubts start when Intel's choice of competitor laptops are dominated by a single vendor. Four out of five of the AMD laptops tested were from Lenovo, and one from HP. The Intel-powered laptops chosen came from a much wider range of manufacturers. 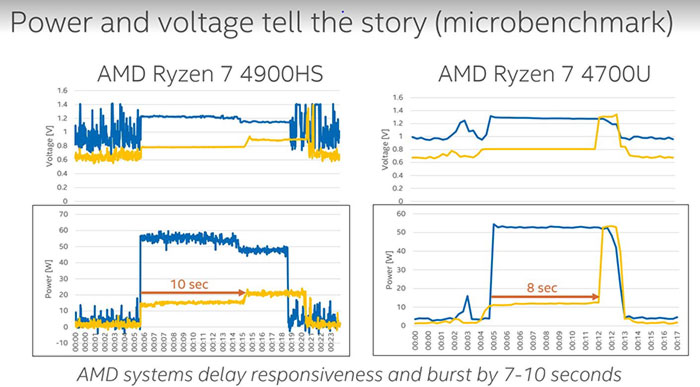 One of Intel's central assertions was that AMD laptops on battery power wait for as long as 7-10 seconds before engaging turbo mode, while Intel systems engage turbo mode more quickly. This means that AMD systems won't be as responsive on battery, says Intel. However, this behaviour is something that AMD OEM partners have direct control of. Other cracks in the Intel presentation became apparent when it started discussing the characteristics of the Ryzen 4900HS when that wasn't even installed in any of the AMD laptops used to measure average system performance. Moreover, Intel chose an outlier PC Mark AC/battery comparison result as the basis for its conclusion that AMD systems dropped 38 per cent performance when unplugged (comapred to a 5 per cent drop for Intel systems). 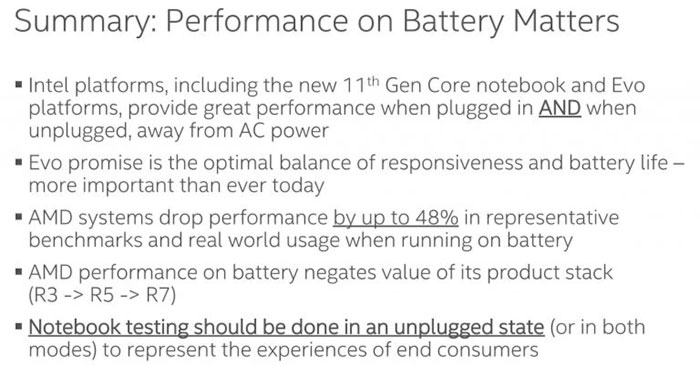 Hruska's own quick tests on an admittedly limited range of laptops gave him the confidence to assert that "what Intel has claimed to have demonstrated is grossly disproportional to what it has actually demonstrated, even if its claims are viewed in the most positive light possible." Those are harsh words from the veteran tech journo but they should be a warning to Intel not to indulge in these kinds of presentations which will be seen through by the tech press, the industry, and many end users. Companies are naturally inclined to try and show their products in the best light but go too far and you will lose trust and burn through years of goodwill very quickly.

All slides reproduced above are from the Intel presentation, not from the alternative tests undertaken by Extreme Tech.

Posted by ik9000 - Tue 24 Nov 2020 13:23
wow. The desperation at intel is almost tangible. What's the next stage? Cry fake news and create a conspiracy theory agenda?
Posted by [GSV]Trig - Tue 24 Nov 2020 13:38
AMD really has caught a lot of people off guard to the point they're just scraping the bottom of the barrel when it comes to excuses about their own performance, lack of improvement and stock availability..

Normally we'd get new products or lower prices, so the consumer wins, but at the mo we get nothing but excuses….
Posted by Tabbykatze - Tue 24 Nov 2020 16:48
Considering how many reviewers are saying how good the battery life is with decent on battery performance to boot? This was a highly selective bunch of BS from Intel, another Principled Technologies.

ArsTechnica did some checks on a laptop Intel had and had this to say:

This MSI Prestige 14 Evo—and its Core i7-1185G7 CPU—is a barn-burner, sure. But the “burn” is a little more literal than we'd prefer, with CPU temps screaming up to 94°C, and CPU power consumption of 34W sustained during Cinebench R23 testing.

The Ryzen 7 Pro 4750u in this HP EliteBook laptop stays relatively cool and quiet during its Cinebench R23 run, with max power consumption a whopping 21W lower than the i7-1185G7's.

But Intel is still playing games with its own power consumption. In the above screenshot, we can see the MSI Prestige Evo 14 with Core i7-1185G7 during a Cinebench R23 run. We haven't had this laptop for long enough to fully review it—and particularly, to review its battery life, which we've been very curious about since being forbidden to test that stat in two earlier i7-1185G7 systems.

But we can see that—rather than dial the i7-1185G7's cTDP down to something approximating the typical Ryzen 7 4000 cTDP of 15W, as widely expected—MSI has in this laptop chosen to dial it up even further than what we saw in earlier prototypes. This production i7-1185G7 system has a variable PL1 that hits as high as 36W during the course of a Cinebench R23 run—in addition to its PL2 of 51W, which is unchanged from the prototypes.

But this ignores the greater efficiency of the AMD systems, above and beyond the delayed shift to maximum performance (and battery consumption) states in the CPU. When we run Cinebench R23 for five full minutes, a Ryzen 7 Pro 4750u system renders more scenes than the Intel i7-1185G7, and it does so with less total power consumed. There's no clever trick to explain that away.

There are quite a few videos from reviewers where the battery life coupled with performance from AMDs side was far superior to Intels 10th gen so unless there is a crazy magic smoke going on inside Intel Tiger Lake, I bet that reviewers are going to be finding that this hit piece behind closed doors by Intel, likely pushed and masterminded by Ryan Shrout whom historically, notoriously, had his tongue up the chutney tunnel of Intel so far he even got a high up role there makes this so devious.

The moral and ethical decay going on inside Intel is just disgusting.

I also am a bit miffed that Hexus was quite muted in this news post, this kind of thing from Intel should not be tolerated and unlike other reviewers whom are hitting this down how it should be, being muted just adds a little bit of “je ne sais quoi”…

Edit: It gets even better!

The blue bar represents the average score the Intel and AMD laptops achieve in the MobileMark 18 benchmark, showing Intel more than 50% in the lead. Additionally, it shows battery life in minutes, where AMD is given the win by around an hour. Most of you have probably never heard of MobileMark 18, and I hadn’t either, and it turns out that this is a benchmark from BapCo, one of Intel’s satellite benchmark companies. So Intel basically gave themselves this 50% win. Furthermore, battery life is not measured with an actual benchmark, but is based on nothing more than the battery size, which is obviously a very misleading way to show battery life.

So Intel is using another benchmarking suite that is likely strongly optimised for Intel systems through compilers because noooo, Intel has never made and distributed a compiler that detriments an AMD system!
Posted by Ttaskmaster - Tue 24 Nov 2020 17:12
Childish spat between two childish tech monopolies, over who gets to monopolise more of my Monopoly money?

Thank-you for bringing it to my attention. Wake me when things have quietened down a bit.
Posted by Iota - Tue 24 Nov 2020 18:46
Usual Intel shenanigans then?

Also, what is with the recent Hexus comment threads all being invalid? This one links to this;

Which leads to this;

No Thread specified. If you followed a valid link, please notify the administrator