You are here:
Laptop PC News

A presentation slide from Intel's Partner Connect presentation, last month, has been causing some ire on social media and tech news channels. The slide in question is embedded directly below and, as you can see, is headlined 'Superior gaming performance with 10th gen Intel Core platforms at a lower price'. The assertion relies on a graph comparing the average FPS (normalised) of two gaming laptops in a selection of modern titles - and the MSRPs of the comparison laptops. 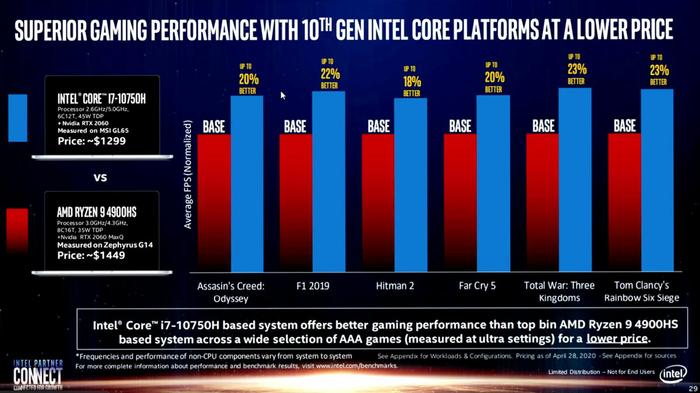 The slide headline appears to be correct; the MSI GL65 Leopard laptop with Intel i7-10750H is hitting higher average FPS than the competing Asus ROG Zephyrus G14 with AMD Ryzen 9 4900HS processor. Furthermore, the MSI laptop is $150 cheaper. However, this isn't and apples-to-apples comparison as gaming performance leans heavily on the GPU (which is different) and, particularly in gaming laptops, on the form factor's cooling capabilities.

RoGame, who shared the slide on his Twitter account yesterday, summed up the key differences in the MSI and Asus gaming laptops as per my table below: 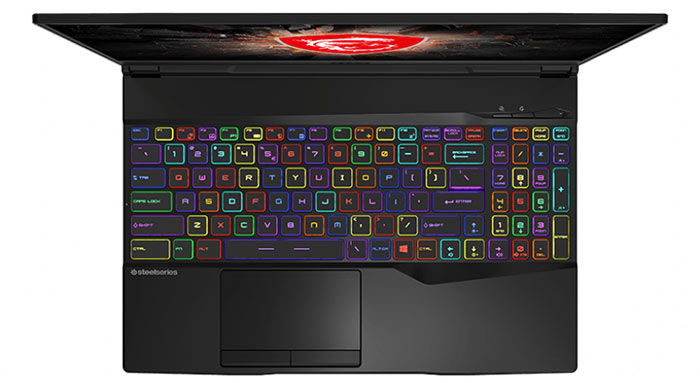 In April, Nvidia updated its Max-Q technologies, and you can see the headlined changes in its blog from the time - but it mostly talks about the high end introductions of the GeForce RTX 2070 Super and GeForce RTX 2080 Super GPUs in Max-Q configurations.

NoteBookCheck has picked through this comparison and asserts that both the laptops under the spotlight use a GeForce RTX 2060 Max-Q but the new MSI GL65 Leopard uses a 90W variant of this GPU, compared to the 65W version in the Asus ROG Zephyrus G14. It highlights that the MSI machine's GPU has a "38 per cent TDP advantage [but] performance gains were muted at 'up to 20 percent'." 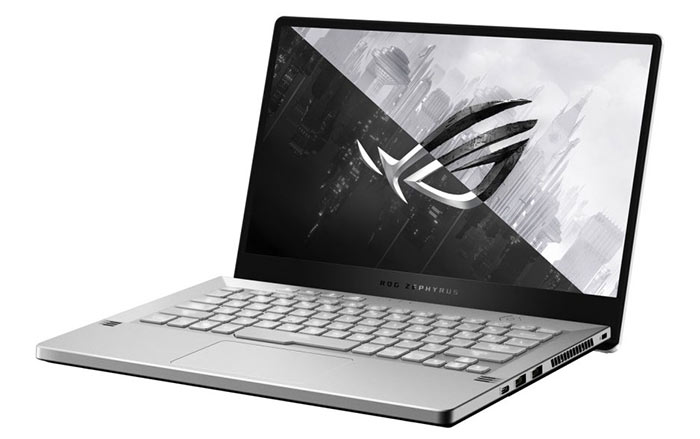 It would be interesting to hear what HEXUS readers think about this kind of presentation slide. Is it fair game to compose such a comparison, or has Intel been a bit disingenuous here? It might be worth keeping in mind that Intel CEO Bob Swan recently went on the record to say that the industry should shift its focus "from benchmarks to the benefits and impacts of the technology we create."

Posted by sykobee - Tue 23 Jun 2020 12:49
Yeah, valid as a system to system comparison, but then the AMD system is thinner (as a result of the reduced thermals) and uses premium components (lower TDP high performance parts cost more).

So it's not a valid comparison how Intel has used it.

The other slides are really dodgy as well. AMD absolutely needs to respond.
Posted by LyntonB - Tue 23 Jun 2020 13:07
Terrible comparison, different chassis/thermal restrictions, 2060non-maxq has a large advantage in TDP. The full fat 2060 with Ryzen would win here, Intel getting desperate. We haven't even started talking about heat generation/battery consumption, the Ryzen efficiency is fantastic, up to 10hours non gaming. no chance on an intel machine
Posted by CAT-THE-FIFTH - Tue 23 Jun 2020 13:17
Jim from AdoredTV got the whole slide stack leaked to him,so he analysed it all:
https://www.youtube.com/watch?v=Gj5_uc4ScNE

Worth a watch,especially as it appears the latest SYSmark now weights single core performance more than the previous version(but not surprising if you remember the history of the benchmark).
Posted by philehidiot - Tue 23 Jun 2020 13:46

CAT-THE-FIFTH
Jim from AdoredTV got the whole slide stack leaked to him,so he analysed it all:
https://www.youtube.com/watch?v=Gj5_uc4ScNE

Worth a watch,especially as it appears the latest SYSmark now weights single core performance more than the previous version(but not surprising if you remember the history of the benchmark).

The problems I have with Jim are:
1) After sitting listening to his long videos, a vaguely amused Scottish accent replaces my usual internal monologue.
2) They make me really, REALLY hate Intel and Nvidia.
3) He then releases another video showing how AMD aren't much better when it suits them.

The end result is I have a vaguely Scottish internal monologue telling me “it's all just a mess, they are all liars. Keep your money and spend it on something worthwhile”.
Posted by fynxer - Tue 23 Jun 2020 14:12
F**K Intel CEO BOB “no more benchmarks” SWAN

Intel use skewed marketing because they know 85% of world population is tech impaired and only look at the charts thinking Intel is the best choice.