Yesterday Qualcomm held its 2nd annual Snapdragon Technology Summit in Maui, Hawaii. Among the announcements made, probably the most interesting for PC enthusiasts concerned Always Connected PCs. Powered by Qualcomm Snapdragon 835 SoCs these devices boast fantastic battery life of 20hrs+ active use and up to 30 hours of standby to instant-on utility. 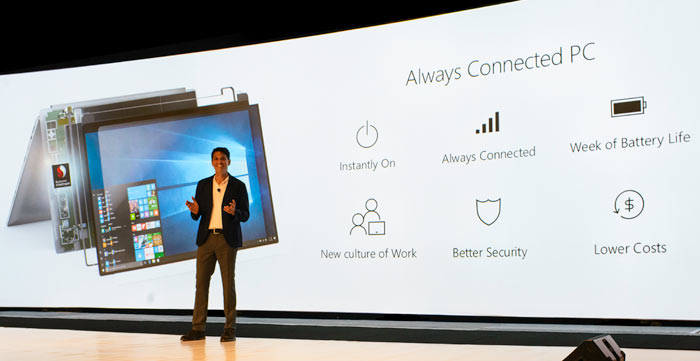 Myerson wanted to share his personal experiences of living with an Always Connected PC over the last few months. Over the last week, he said, "I watched the movie Moana with my daughter, worked in PowerPoint, browsed the web every day, reviewed budgets in Excel, checked email while waiting to pick up my son from soccer, marked up a few PDFs with Ink, played some games on the plane – all of this without plugging in my power cord". 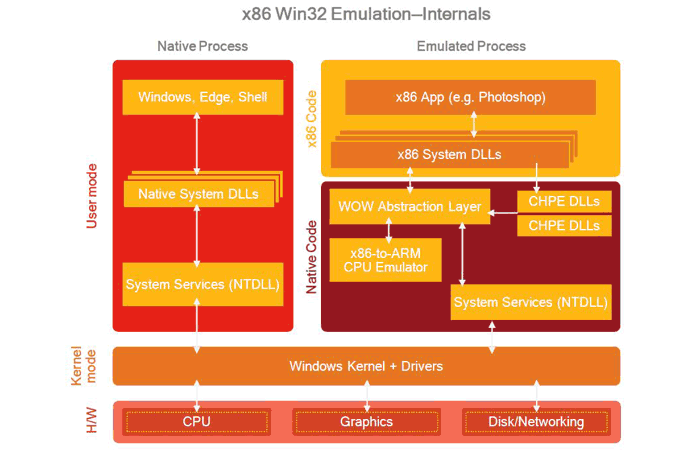 There have been some leaked reports about performance being lacking with these Arm-powered devices. However Myerson asserted his experience was "fast and responsive". We already mentioned the battery life benefits above in terms of active and standby use and in Myerson's life experience but what other benefits does an Always Connected PC deliver? The two main answers to that come from the smart-device-like response of these PCs. First of all Microsoft says the screen is instantly on, there is no wake-delay. Secondly the machines are, as per the name, always connected, offering a fast, safe and secure way to work, collaborate and communicate wherever you are (with cellular coverage).

Happily we do have info about pricing and availability. The Asus NovaGo starts from US$599 with 4GB RAM / 64GB UFS2.0 storage (or an 8GB RAM / 256GB storage model at US$799). It will begin shipping in quantity before year end reported Mary Jo Foley on ZDNet. The HP ENVY x2 detachable will cost GBP£999 when it is released in February according to Tom's Hardware. The HP machine includes a keyboard and active pen.

Posted by Kato-2 - Wed 06 Dec 2017 10:17
Looks interesting, a bit higher priced than I'd hoped but in terms of being fanless and that very long battery life that's pretty good for Windows PC.

The x86/Win32 emulator seems to work well enough for lite duties, hopefully they make the wise decision to allow the compiling of Arm/Win32 desktop software to extract full performance. The emulator should be the fall back option for when Arm native software isn't available.

UWP supports Arm so in theory the games on the MS Store should have Arm builds too, it will be interesting to see how the Qualcomm GPU handles those what with it being ATI's former mobile division.
Posted by philehidiot - Wed 06 Dec 2017 10:48
Agree that the emulator should be a last resort. I'm very interested in these things. My phone is insanely responsive and far better to use than a budget PC for most of the stuff he mentioned, the limitation being the screen size and HID options. If you can expand that out and make it work with proper MS software then you have something that will do almost everything you would ever want to do with a standard laptop. Hell, my phone is better at video editing than work's cheap PCs which is saying something about the chooch factor of modern SoCs.

One thing that gets me is the marketing crap above - “Secondly the machines are, as per the name, always connected, offering a fast, safe and secure way to work, collaborate and communicate wherever you are (with cellular coverage)”. Uhh, no the best gift you can give to a hacker is to leave your PC on all the time and turn off the screen so you can't see what is going on. If it's always connected then it's potentially very vulnerable and given the target market is likely business, you may put people off with this “feature”. Personally, I'd be demanding the device be shut down / networks disconnected when not in use if it were to be used for anything sensitive.
Posted by LSG501 - Wed 06 Dec 2017 11:06
Ok… I was interested in maybe getting one like the HP but why on earth would I pay £1000 (+ extra for pro if it's not free) for it when I can get a perfectly capable tablet and with either mobile data built in or a hotspot for considerably less.

While I'm sure MS won't let this one suffer as badly as windows rt, you'd think they would want people to buy them and I'll be honest at the prices they're listing, I'd edge towards an intel based machine and a hotspot or even an iPad Pro. Yes the intel one will likely have less battery but there will be no issues with compatibility, which I'm sure this will have because they can't test everything, and it will still likely last the whole ‘working day’ for me.

Now a similar spec'd iPad pro would likely be a little more expensive but everything it runs will work without issue and I'd also argue it will have better resale value etc.

Also on the day these are announced Qualcomm announced the 845 chipset….which should bring a number of improvements etc as it is the direct update to the 835.
Posted by Biscuit - Wed 06 Dec 2017 11:07
These battery life claims are very much in, “I'll believe it when I see it” territory. In absolute perfect conditions perhaps they will achieve this, but in real life, real user conditions I bet the battery life ends up being barely better.
Posted by philehidiot - Wed 06 Dec 2017 11:33

Biscuit
These battery life claims are very much in, “I'll believe it when I see it” territory. In absolute perfect conditions perhaps they will achieve this, but in real life, real user conditions I bet the battery life ends up being barely better.

Yep there's “20 hours+” and “up to 20 hours” on this page and frankly, is it really 20 hours of real use or pathetic “display so dim you can't see it, all but one low power core disabled” use? If we extrapolate from a mobile phone, I think it's fair to say if they're going for ultra slim you'll get a battery about 4 times the size (going by the same width and depth but longer, spanning nearly the width of the laptop), so that's 12,000mAh. So then we look at how long my phone lasts with constant, active use. That's probably 5 hours. So there's 20 hours, except you have a far bigger screen to power which is the main battery draw. If these things get 15 hours of proper use, I'd be pretty content. You know that with that kind of endurance it'll last all day.