TSMC will being volume production of chips using its 5nm (AKA N5) process starting next month. Taiwanese IT industry journal DigiTimes has provided this time scale tip-off and adds that some of the first processors benefiting from TSMC N5 technology will be Apple's A14 Bionic SoC.

Taiwan's leading contract foundry reported that it was very happy with its full node stride from N7 to N5 technology, representing "an 80 per cent logic density gain and about a 20 per cent speed gain compared with 7-nanometer". Test production gave "good yields," according to an investor call in January 2020.

N5 will adopt EUV extensively and TSMC expects a "very fast and smooth ramp of N5," from H1 to H2 2020. Mobile and HPC customers have major orders, but of course won't account for all orders for the N5 line. TSMC expects N5 to contribute about 10 per cent to its wafer revenue in FY 2020. Overall it predicts that with further improvements possible to its N5 process, boosting performance, power and density, it will be a large and long-lasting node. 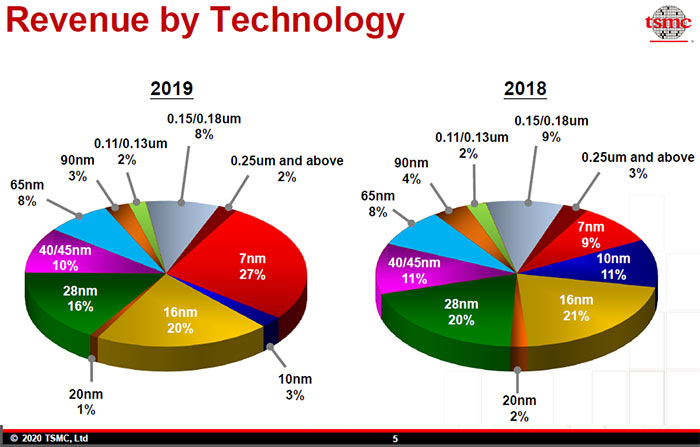 As mentioned in the intro, Apple will be one of the first customers, and it needs to be to get its new iPhones ready and onto market during, traditionally, September time. Previous rumours have pointed to the Apple A14 Bionic SoC being capable of quite a performance uplift, rivalling the Intel Core i5 processors that are a popular choice among its MacBook Pro users. This could lead to an industry quaking switch for Macs, but it is a long time since Apple pulled off a bold move like that.

While other high-tech manufacturing nations have felt heavy impacts from Covid-19, Taiwan, despite its proximity to China (180km of sea) has beat the odds and it has only recorded 49 cases, and seen one death, as of the time of writing. To put this in perspective it recorded its first Covid-19 case on 20th Jan and there is traditionally lots of trade and people moving between the island and China. It currently looks like the Taiwan government's preparedness and steady hand will mean manufacturing at places like TSMC won't be stalled by Covid-19.

Job lot transistors? like the ones you get for simple electronics? Are they even made of silicone though?
Posted by ultrasbm - Thu 12 Mar 2020 16:49

don't knock it - vital for analogue guitar processors, audio circuitry and the like