You are here:
Industry Gadgets News

If you aren't already looking forward to Nvidia's GTC 2020 in San Jose from 22nd to 26th March, perhaps the news that there will be at least six green-team-tech-packing smart robots at the event will kindle some interest. Nvidia promises that an array of smart robots which work in diverse environments and equally diverse tasks will be on the show floor. 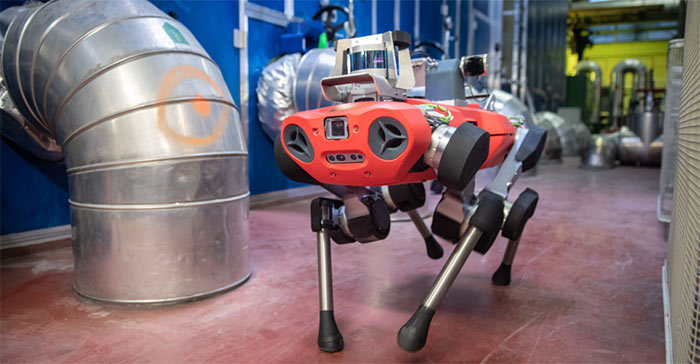 Amit Goel, senior product manager for autonomous machines at Nvidia has been given the unofficial title of 'Robot Wrangler' for the GTC 2020 event. In a blog post about the upcoming smart robot saturated event, Goel says he is interested to see how autonomous machines are advancing this year. In particular they are getting so much better at quickly ingesting and acting on data gathered as they navigate around unstructured environments. This is a key advancement for robots which are used in situations and environments that could be unsafe for a human presence.

The pictures within this article show that robots tailored for a diverse set of operations will look very different. At the top of this article you can see the ANYmal C from ANYbotics AG which is designed to roam construction sites checking for trouble. Below (left) is the Gita personal robot from Vespa which can carry up to 40lbs (about 18kg), and the Bossa Nova robot (right) for inventory checking in superstores.

As mentioned in the intro, all these robots have one important thing in common - their 'smarts' are all powered by some kind of Nvidia hardware. For example, the ANYmal C uses its Jetson AGX Xavier GPU to navigate, detect obstacles and find the best path to patrol. It can clip through tight passages, climb stairs, and inspect machinery with its depth, wide-angle and thermal cameras.

The cute orange Gita bot runs using a Jetson TX2 GPU. This modern beast of burden uses its smarts to follow around its owner while carrying up to a 40lbs load. Thanks to various efficiencies Gita can operate for 4 hours continuously.

The man-sized Bossa Nova retail robot can scan a 40-foot supermarket aisle in 60 seconds, capturing 4,000 images that it turns into inventory reports. Unsurprisingly this robot has already found employment: Walmart plans to use Bossa Nova bots in 650 of its stores. Nvidia says this robot's smarts are powered by a Turing architecture RTX GPU.

As well as specific robot attractions, the GTC 2020 will host a Jetson AI-powered DIY robotic car race. Entrants will be zipping around a track on the show floor at speeds of up to 50mph. This championship will run throughout GTC 2020, culminating in the championship race on day 3, with an exhibition race scheduled for day 4.