A few hours ago CNBC published a video interview with AMD CEO Dr Lisa Su. The wide ranging interview was really aimed at investors rather than tech enthusiasts but it still provided some interesting insight into AMD's management and progress over recent years. 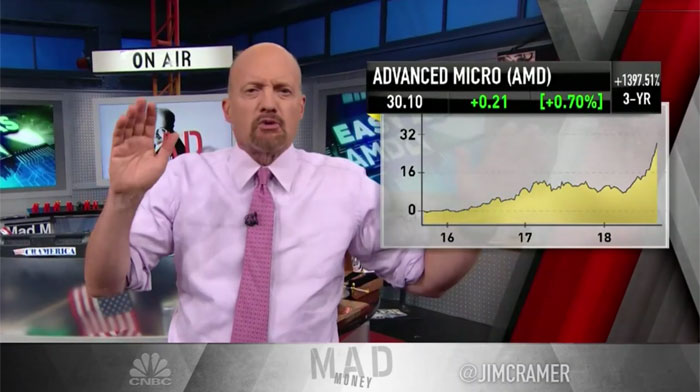 To begin, CNBC's Jim Kramer asked about AMD's progress, during SU's four years of stewardship, as the share price has risen from $3 to over $30. Su explained that "AMD always had great technology assets, but it was about putting those assets to work." Knowing what AMD is really good at and targeting those markets was very important, she added. 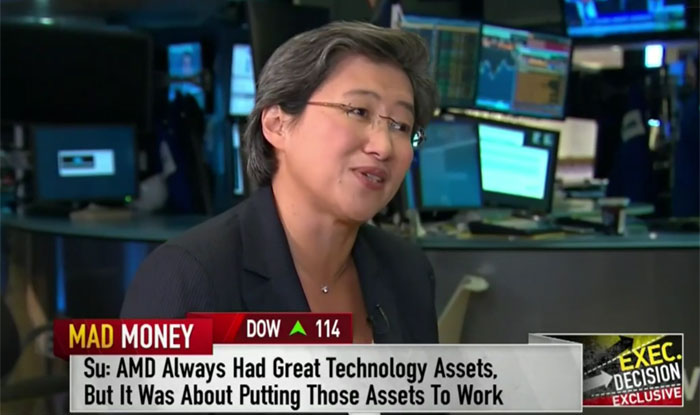 Su went on to assert that AMD is one of the very few companies that can address the needs of high performance computing customers, a $75bn addressable market. In the world as it is now, HPC isn't just relevant to enterprises and data centres etc, the technology is important for PCs and games consoles too, as these users want ever greater processing power.

Choosing where and where not to invest

CNBC's Jim Kramer then asked about how AMD could pull itself up, with its comparatively scant resources for R&D, marketing, and so on - to compete with the likes of Intel and Nvidia. Su explained that making the right investments and choosing where not to invest were critical to the growth we have seen. On her good decisions she cited architecture and process technology. Furthermore, three or four years ago mobile phones and tablets were the 'hot' sectors but Su decided that "those are not AMD". Interestingly, Su said AMD is making decisions now that end-users won't see the results of for three to five years.

Su was asked about Intel's 10nm slip by the CNBC host. She replied that AMD's strategic roadmap doesn't rely on competitors not doing well. Moreover, AMD's CEO has noted that "Moore's Law is changing" and architectural and partnership decisions (like working closely with TSMC) have helped AMD's progress and kept it on the cutting edge.

Moving onto the GPU market, Su told Kramer that she thinks that there is plenty of room for competition with "multiple winners." AMD is looking to progress in both gaming and GPU compute applications.

Next the interview considered AMD's semi-custom business. Here Su highlighted AMD's ability to work with separate competing partners and make them happy with their AMD components - each providing a differentiating "secret sauce" with which to sell their consoles.

Finally the interview wrapped up with Su saying that AMD still "has a ton of work to do" but is now in a great place in multiple prospering markets.

That is exactly right. Exactly. Spot on quote. Do what youve got planned and by all means watch the opposition, but do what's right for you and not what's wrong for them.
Posted by EN1R0PY - Wed 12 Sep 2018 14:49

That is exactly right. Exactly. Spot on quote. Do what youve got planned and by all means watch the opposition, but do what's right for you and not what's wrong for them.

Exactly, I think she's done an amazing job, she secured my current build by nearly matching intel on single thread perf and blowing then away in multi thread and value, that's impressive work since excavator! Whatever you think of AMDs products their CEO deserves an award for what she's done. And unlike most CEOs I actually think she knows what she's talking about when she does the videos on the product, I'm not sure Jeff bezos had ever actually ordered anything online himself!
Posted by ultrasbm - Thu 13 Sep 2018 08:38

EN1R0PY
… I'm not sure Jeff bezos had ever actually ordered anything online himself!

That is exactly right. Exactly. Spot on quote. Do what youve got planned and by all means watch the opposition, but do what's right for you and not what's wrong for them.

In fairness though, if you're the underdog, by definition, you can't rely on competitors not doing well, since you're the one not doing well. Intel and nVidia has been able to rely on competitors not doing well because they haven't been for the better part of 10 years. Now, let's hope that AMD can mirror the CPU bounce back in the GPU arena with the upcoming 7nm parts.
Posted by DaMoot - Thu 13 Sep 2018 15:43
Did they ask her why AMD has sucked harder than an overpriced hooker for the past 15 years? Doing scummy things like half-cores and then calling them full logical cores. Having terrible general performance. Having poor $ to performance ratios. And now their just repeated disasters with GPUs…

Seems like the only reason AMD is keeping their head above water is because they make APUs for bunches of stuff including the console vendors (who will probably steer away with next gen due to performance). And they make that line of super high end thousand dollar CPUs that people love OCing.