Ever since the first NVIDIA Kepler based add in card hit desktop computers in March, mobile gaming enthusiasts have been asking for a high end Kepler part. Now NVIDIA has announced its GeForce GTX 680M, sitting atop of its notebook GPU line-up. 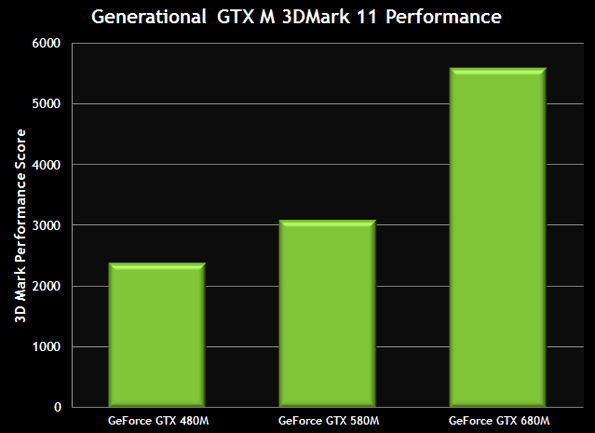 The NVIDIA GeForce GTX 680M GPUs are to be featured in the newly announced Alienware M18x and M17x Notebooks. Rene Haas, vice president and general manager of the notebook business unit at NVIDIA said “The GeForce GTX 680M is the fastest mobile GPU ever, but it's more than just a speed king. It also offers an entire arsenal of next-gen gaming technology, along with Optimus technology for extended battery life”. 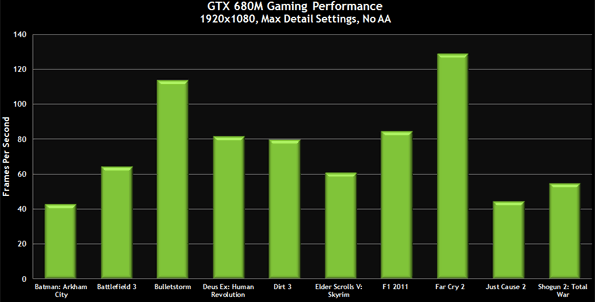 As more and more 6XXM notebook graphics chips have been announced we’ve been waiting for a top of the range Kepler based part. NVIDIA has confusingly mixed both Fermi and Kepler based graphic chips in desktop and notebook graphic cards in the 6XX series as some kind of bamboozling marketing ploy. Also there are differences between mobile and desktop parts with the same model number, for example while the desktop GeForce GTX 670 is a card with a Kepler core, the GTX 670M uses a Fermi core.

Looking at the GeForce GTX 680M spec it does seem like it shares key qualities with the desktop GeForce GTX 670 such as the 1344 CUDA cores and 256 bit memory interface but with lower component clocks to keep the power usage down. 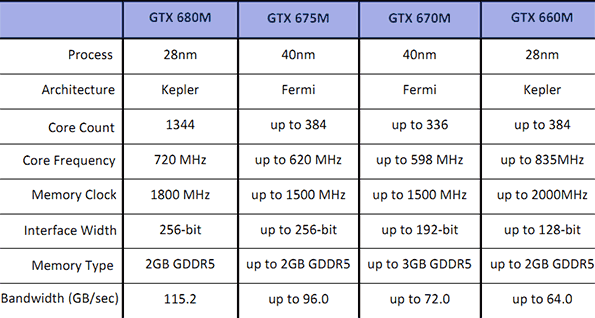 Ever since the Kepler architecture was released NVIDIA have been emphasising the better performance per watt so it’s easy to see why this GeForce GTX 680M a highly desirable laptop graphics option for mobile gamers. While in Ultrabooks this chip would be out of place and the lower speed/power Kepler core mobile parts such as the GT 640M may be more appropriate. As well as within the Alienware M18x and M17x you will be able to get the new GeForce GTX 680M in the following laptops shortly; Clevo P150EM and P170EM, MSI GT70, Origin PC EON15-S and EON17-S.

41 QOTW: Do you use a discrete graphics card?

I think somebodies graphs are a bit misleading here. Do they just make them up?

You're not comparing the same graphs - you can't compare nVidia provided graphs to Hexus review graphs - they almost certainly won't have been using the same computer or settings.
Posted by CAT-THE-FIFTH - Tue 05 Jun 2012 15:41
As with AMD,official benchmarks do include a level of cherry picking the best case scenarios. OTH,in the US it seems you need to pay around $250 to $300 more for a GTX680M than an HD7970M.

Both games tested do relatively well on the desktop GTX670 and GTX680 at 1920X1080 when compared to the HD7870 and HD7970. However,15% to 20% higher performance for a 40% larger GPU in two games,probably means AMD might be overall still quite price/performance competitive in the higher end mobile GPU space.

Earlier leaks indicated the GK106 would be used in the GTX680M as there were even leaked pictures of the mobile GPUs and a few benchmarks. However,these were slower the HD7970M. It had 768 shaders.

It does make me think whether how competitive the GK106 will be when compared to Pitcairn and Cape Verde.
Posted by bobharvey - Wed 06 Jun 2012 16:13
You watch. it will end up in laptops with 768 vertical pixels, rendering the twhole thing rather pointless.