Back in May we saw reports in Korean business media about Samsung preparing to launch an Exynos SoC packing an AMD Radeon GPU sometime in H2 2021. Shortly afterwards, at Computex 2021, AMD officially announced it had partnered with Samsung on its next gen Exynos, and that the chip was going to leverage RDNA2 graphics for raytracing and variable rate shading in flagship mobiles. We are now well into H2, some might instead call it Q4, but Samsung has only just released the first teaser for the graphically revamped Exynos. 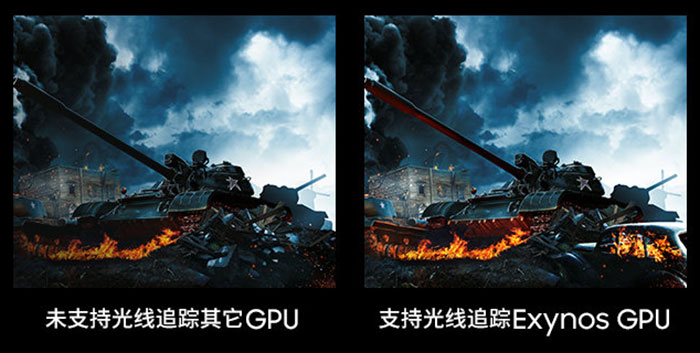 Above, you can see the image that Samsung has shared on Chinese social media site Weibo. The image might be a still from a game or just a mock-up, but it gives the viewer the idea that the next gen Exynos graphics are going to be richer with the addition of realistic reflections and more flames. Overall the image is more punchy and appealing, but I don't think this comparison warrants any real analysis, as we don't know its origin, rather it provides an 'impression' of extra graphical richness. 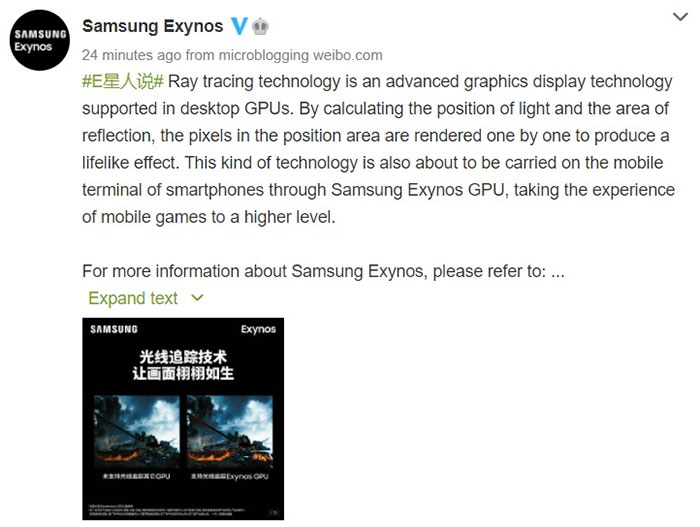 If Samsung was serious about showing off the new Exynos it could have done more, like a comparison video with details of screen resolution, quality levels, and frame rates, but it seems to be keeping its powder dry for now.

XDA-Developers reckon that the new Exynos featuring AMD RDNA2 tech will be the Exynos 2200. It goes on to say that this SoC will be in the Galaxy S22 series smartphones which will leverage "an Arm Cortex-X2 core clocked at 2.9GHz, three cores clocked at 2.8GHz, four cores clocked at 2.2GHz, and an AMD GPU clocked at 1250MHz".

As well as the potential for ray traced graphical finery, and a potentially significant performance boost over the Mali graphics processors that are replaced, AMD's mobile GPU solution will enable VRS (variable rate shading). VRS is an efficiency setting, which renders imagery at the periphery of your vision at lower detail levels – most people won't notice this as long as the central area of a scene stays crisp and high quality. VRS works particularly well with eye tracking tech and VR headsets.

Expect more info about the Exynos 2200 with RDNA2 GPU as we get closer to the Galaxy S22 reveal event.