There is a new AMD RDNA 2 graphics card on the block, and it comes with an AiO liquid cooler as standard. AMD hasn't come forward with an official announcement and product page as yet, but the graphics card is detailed at system making partners like Maingear (US), PC Specialist (UK) and DosPara (Japan). Thanks to VideoCardz for unearthing those links. I've also spotted this liquid cooled GPU being promoted by similar high-end PC systems makers like Falcon Northwest, and NZXT BLD. 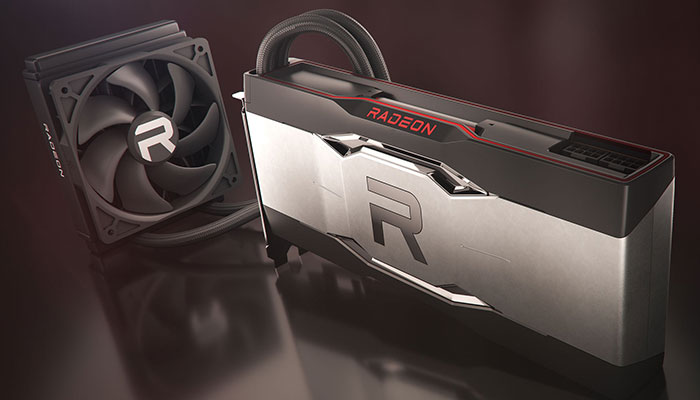 PC Specialist only shares what looks like a PR description of the AMD Radeon RX 6900 XT Liquid Cooled edition. Meanwhile, Maingear shares similar blurb but mentions that the fast new GPU from AMD is going to be a configuration option in its VYBE and RUSH pre-built PCs. Dospara is going to be selling AMD's latest and greatest AiO cooled GPU in its Galleria ZA9R-69XT LC desktop PCs, with a limited run of 100 units. 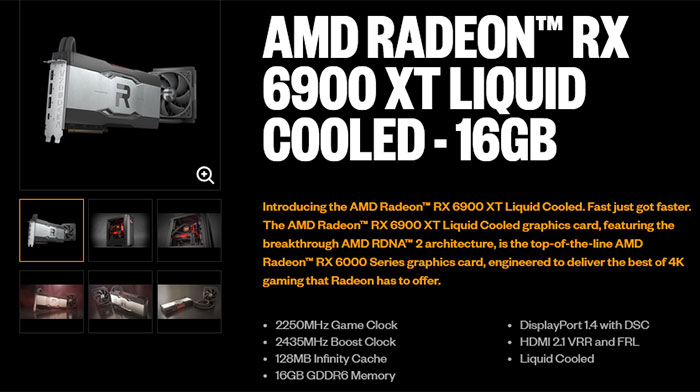 Moving along to what Falcon-NW reveals, it at least shares some tech specs bullet points for us to get our teeth into when you go to configure a new PC system. You can see above, that the GPU under scrutiny features a 2,250MHz game clock, a 2,435MHz boost clock, 128MB of Infinity cache, and 16GB of GDDR6 memory. This liquid cooled behemoth features various output ports including DP1.4 with DSC, and HDMI 2.1 with VRR and FRL. Clicking a 'compare' button reveals that this LC card is going to cost you US$696 more than the 'plain' RX 6900 XT option, but it is six per cent faster in 3DMark Fire Strike Ultra 4K benchmarks… (see below) 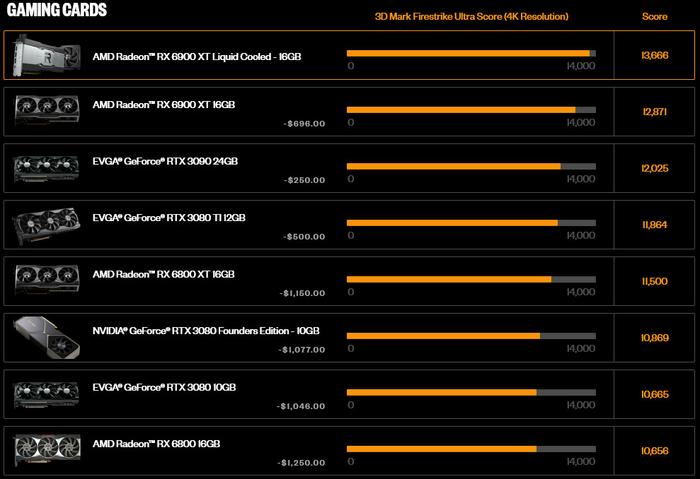 NZXT BLD's configurator reveals some different details. For example, it lists its AMD Radeon RX 6900 XT Liquid Cooled edition as being made by ASRock, with a core clock speed of 2,015/2,250 MHz, and a GDDR6 memory clock of 16,000MHz. While the cheapest AIB option for your NZXT build is an RTX 3060 for +$200, the AMD flagship with LC AiO will add $1,800 to your build price. Lastly, for the specs we have access to right now, VideoCardz unearthed the comparative spec sheet below from a Japanese source, which shows that the new AMD Radeon RX 6900 XT Liquid Cooled edition has a TBP of 330W.

Posted by Kanoe - Thu 17 Jun 2021 10:40
US$696 more for 10% more power draw and 6% more performance. Give me strength!
Posted by Corky34 - Thu 17 Jun 2021 10:49
Just what everyone wanted, a more expensive GPU at a time when GPU prices are already stratospheric.
Posted by QuorTek - Thu 17 Jun 2021 17:22
I am going to put it down easy… the Consoles is winning this war, highend gaming PC's is a thing of the past, especially if you want to hit the mythical 4K proper, which still suck on native and that they have to put in extra gadgets to make it look like that it is good.