Intel's senior vice president, chief architect, and general manager of Architecture, Graphics, and Software has published a close-up photo of the firm's Xe-HPG GPU, destined for DG2 gaming graphics cards. The photo shows the chip in hand, and clearly labelled as boasting 512 EUs. Interestingly, the powerful new GPU, which is expected to deliver performance somewhere between the Nvidia GeForce RTX 3070 and 3080, is said to be operating "buttery smooth" after a few weeks spent optimising drivers and games – but there is still lots of work to do. I think we last saw this GPU being tested at Folsom Labs, back in March. 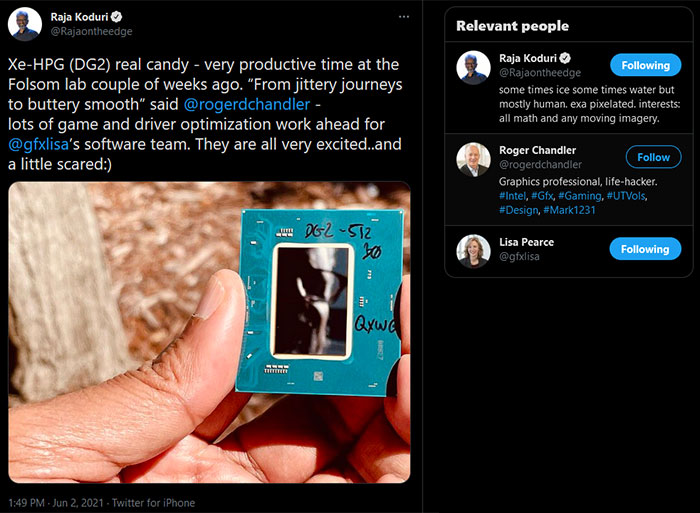 Above you can see the nice and clear die shot as revealed by Koduri on his Twitter feed. It is described as an Xe-HPG (DG2) chip by the Intel graphics boss, so there is no uncertainty regarding what we are looking at here. Making things even more clear is the fact that someone in Koduri's team has taken a Sharpie and scrawled 'DG2 – 512' on the substrate.

From previous information and leaks it is expected that the Xe-HPG with 512EUs will be Intel's top consumer graphics card of the DG2 generation, probably accompanied by 8 or 16GB of GDDR6. There are indications that Intel is looking at models with 384 and 128 EUs, and with 4, 6, 8 or 12GB of GDDR6, too.

Koduri's Tweet spoke a lot about the ongoing software development side of things which seems to be the focus now. If you read about AMD's FidelityFX Super Resolution (FSR) tech yesterday, and its open nature, you shouldn't be surprised to hear that Koduri has confirmed that Intel is "definitely looking at it," with its open approach being an attraction.

John_Amstrad
How is it possible for AMD to protect from copying its innovations hosted in Koduri head?

Quite easy, if Raja has observably used AMD owned IP and Patents that he worked on while at AMD in Intel Xe then AMD can come after Intel for infringement. Just because they're in Rajas head as well in AMDs coffers does not mean he has the right to use them at Intel.

John_Amstrad
How is it possible for AMD to protect from copying its innovations hosted in Koduri head?

They have a comprehensive cross licence agreement, so probably not an issue.

MrJim
Between 3070 & 3080 level of performance will be pretty impressive for a new entrant into the gaming GPU market. As the news article says, more competition can't come soon enough!

If the cards aren't actually out for nearly another year, will it still look so impressive? I can see this going the way of the RX480, which sounded pretty impressive in the leaks Nvidia had moved the goalposts by the time it came out.

They get TSMC to make it. I suspect Intel's fabs are still close to capacity, recovering from having to make bigger CPUs because people wouldn't accept a quad core i7 any more.