Those waiting for a release timescale or anything in the way of further information about AMD's FidelityFX Super Resolution may have been disappointed with the Where Gaming Begins III presentation last night. As well as the headlining reveal of the AMD Radeon RX 6700 XT at $479, there was some new information about the proliferation of Smart Access Memory, and a round-up of other FidelityFX technologies plus supporting tech like DXR, Radeon Anti-Lag, Radeon Boost, and Infinity Cache. 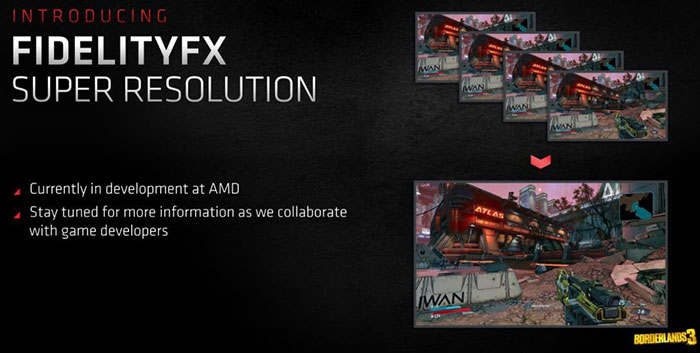 AMD's FidelityFX Super Resolution, or FFXSR for short, is destined to play a big part in pepping up Radeon RDNA2 GPU performance in DXR games, just like Nvidia's GPUs have their performance propped up by DLSS 2.0 right now with RTX On.

Last October, when AMD revealed the first RDNA 2 graphics cards to eager PC enthusiasts and gamers we first heard word of AMD developing a DLSS-like technology. It was said to be an "open and cross platform" alternative, obviously able to support AMD's console partners, with leading machines like the Xbox One X/S and PlayStation 5.

AMD's FFXSR implementation sounds like it shares a lot in common with DLSS in how it will work. It is said to reply on AI/ML tech, supposedly based on DirectML API, part of the Windows Machine Learning Library. 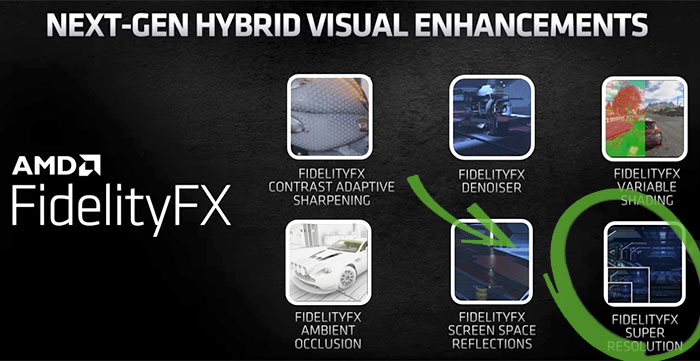 Slide from Where Gaming Begins III did mention FFXSR

While nothing in the main presentation helped us understand, measure up, or know when to expect FFXSR, Linus Tech Tips (YouTube link) seems to have got some extra info about things to come, perhaps from a pre-event NDA briefing, thinks VideoCardz.

"Apparently, rather than rushing [FidelityFX Super Resolution] out the door on only one new top-end card, they want it to be cross-platform in every sense of the word. So they actually want it running on all of their GPUs, including the ones inside consoles, before they pull the trigger.

It would've been nice to have it ready by the time the cards launched, but as we saw with Nvidia's DLSS 1.0 versus DLSS 2.0, it could be for the best." Linus Sebastian.

The highly anticipated Resident Evil Village is confirmed to feature real-time ray tracing on AMD RDNA2 graphics cards. However, according to the official AMD specs you will require at least a RX 6800 XT to enjoy the experience. Steam doesn't have any specs up at the time of writing. Once FFXSR gets up and running perhaps this game will work ably with DXR on lower-end GPUs like the new RX 6700 XT. 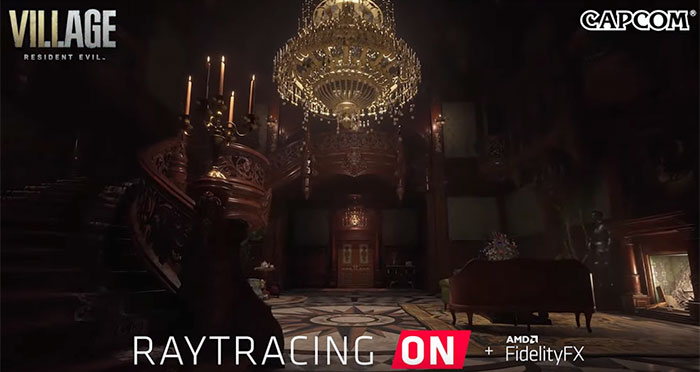 Resident Evil Village launches on 7th May, but you might be able to download and play a demo before that time.

Developers will be able to add DLSS in "a few clicks". Feature arrives before the end of 2021.

Posted by tapmybuttons - Thu 04 Mar 2021 14:48
Glad there taking their time but at the same time the wait is agonizing because I want to buy a GPU to play at 3440x1440 with ray tracing enabled and NVIDIA is the best choice at the moment. Really want AMD to give them some competition and if super resolution works as intended the 6700 XT would be an ideal choice in the coming months for me
Posted by QuorTek - Thu 04 Mar 2021 16:56
AMD has always been taking their time with things, it is no wonder why they get to be in the consoles as for one thing that is.
Posted by fend_oblivion - Fri 05 Mar 2021 04:31
Hope it's worth the wait.
Posted by lumireleon - Fri 05 Mar 2021 06:20
This is going to be VERY hard for AMD while Nvidia has dedicated ML transistors. Both software and hardware stack of Nvidia are miles ahead.
Posted by Gentle Viking - Fri 05 Mar 2021 07:48
I disagree on miles ahead on hardware, AMD are utilizing the same manufacture processes ASO, but yes NV are leading on design still, but if they had moved lately like AMD have, the new NV cards should be about 2 X as strong,,,,,,, and thats not the case.
So if NV dont get their finger out the 2 will be neck and neck soon if AMD can keep up the steam.

I will also agree that NV are leading on drivers / software, AMD still have plenty of room to get better here.

I will get more power upgrading from my 5700 XT to a 6800XT VS a NV user say updating from a 2080 to a 3080. ( at least thats my feeling, dont really keep that much tabs on things today )
But yes i will then only be updating from no RT to some RT where the NV cards have gone from some RT to good RT