AMD has announced that it has more graphics cards to reveal, fleshing out the Radeon RX 6000 graphics family. It has scheduled a new episode of Where Gaming Begins for Wednesday, 3rd March, and the show will start at 11am EST (4pm GMT). How exciting – that is less than a week away.

On March 3rd, the journey continues for #RDNA2. Join us at 11AM US Eastern as we reveal the latest addition to the @AMD Radeon RX 6000 graphics family. https://t.co/5CFvT9D2SR pic.twitter.com/tUpUwRfpgk

In an official AMD Radeon RX social media post, embedded above, you can see that AMD refers to an addition to the Radeon RX 6000 graphics family – singular. We've had lots of leaks regarding an upcoming Radeon RX 6700 XT, so this is what I am expecting from AMD. Unfortunately, with the singular reference of the Tweet, I think that the only RX 6700 (non-XT) info will be a bit tacked onto the end of the presentation. Surely though, it can't be long until the follow-up happens if it isn't added to this event stream. In July 2019 AMD launched the Radeon RX 5700 XT and RX 5700 together. Here is the review of the Radeon RX 5700 XT and RX 5700 reference cards from HEXUS.

The teaser animation for the third Where Gaming Begins episode includes the now familiar rendered image of a modern AMD reference design with twin fans. Just as the animation starts, focussing on the blanking plate, you can make out a single HDMI (2.1) output, and three DisplayPort (1.4) outputs. 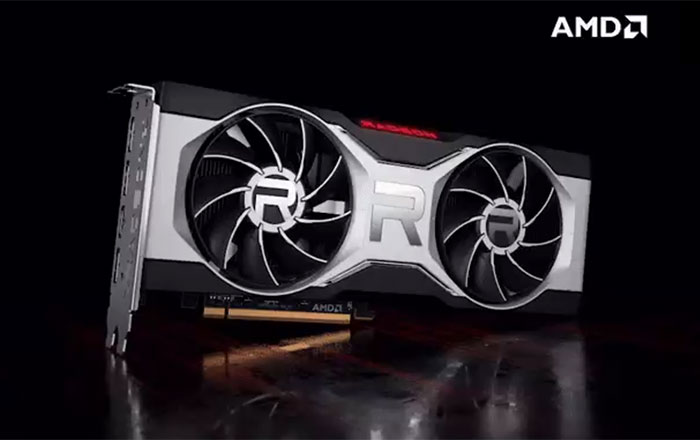 The latest rumours point to the RX 6700 XT having 2560 stream processors and 12GB of GDDR6 memory. It is likely to challenge the Nvidia GeForce RTX 3060 Ti in gaming, with the upcoming RX 6700 taking the fight to the soon-to-launch RTX 3060.

If you want to catch up on previous episodes of Where Gaming Begins you can watch the videos embedded on the AMD gaming events 2020 web page.

Posted by rabidmunkee - Thu 25 Feb 2021 10:19
Yay, so not only do we hear about all the tax rises in the budget that day, we also get this great news about new gpu's that we wont be able to buy, im going to love next wednesday… sorry, a bit bitter today
Posted by SkywalkerLuke - Thu 25 Feb 2021 10:43
all I would add… Another super card by AMD that we can't buy.. LOL roll on 2022
Posted by lumireleon - Thu 25 Feb 2021 13:00
why not? delay so that the iMac and Mac Pro can get supplies for their upcoming update (add $1500 for RX6700)
Posted by Euphonium - Thu 25 Feb 2021 19:25
I don't want to hear about another product release until it is either widely available at MSRP (hardware) or mostly bug-free (software)
These days I think I'm better off planning to be running a year behind, because at least then things will be available.
Posted by DanceswithUnix - Thu 25 Feb 2021 20:20
Perhaps us gamers need to club together, buy a mining rig between 8 of us and split the GPUs :D