Over the weekend there were quite a few retailer-based leaks, which can increase when products are quite close to release. Another significant leak spotted by Tum Apisak this time, is of some laptop listings featuring Nvidia GeForce RTX 30 Mobile graphics processors.

Last week we reported upon the leaked Nvidia mobile GPU roadmap for H1 2021, which provided some interesting insight into what to expect in the coming few months with regard to gaming laptops. It showed the entire RTX 20 series being supplanted by RTX 30 GPUs. However, for the duration of H1 2021, the GTX 1660 Ti, 1650 Ti, and 1650 would remain on the menu at the budget end of things.

South Africa's 'leading' computer retailer Pinnacle revealed some exciting looking Asus ROG Zephyrus laptops this weekend, stuffed with new tech such as AMD's Ryzen 5000 H Series processors, as well as the headlining RTX 30 GPUs for mobile, from the green team. I've checked out Tum Apisak's links today (Monday morning) and they appear to lead to Intel Comet Lake / RTX 20 laptops – so someone has had their knuckles rapped for the slip-up I'd guess.

Thankfully Apisak shared a screenshot from before the edits, as you can see above. VideoCardz also took some screenshots and has one listing five Asus ROG Zephyrus laptops with various new tech from AMD and Nvidia equipped (see below). 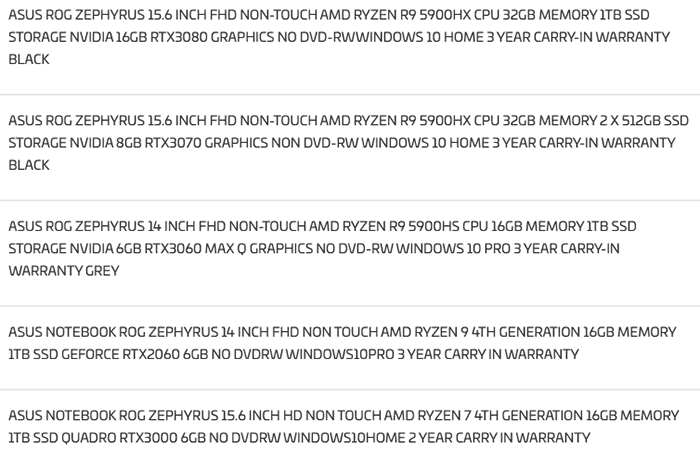 What is particularly interesting about this leak, with regards to Nvidia's components, is that we are seeing listed an RTX 3080 mobile GPU with 16GB VRAM, and an RTX 3060 Max Q with 6GB of VRAM. So, what is happening the the high end mobile part having so much VRAM - by the time these laptops come out will desktop RTX 3060 6GB graphics cards be already available? Of course these leaks might simply be mistakes, and should be taken with a pinch of salt.

Zhaoman
The 16GB mobile 3080 is rumoured to be similar to a slightly tweaked desktop 3070. If they can do 16GB for mobile surely they can release a 16GB 3070 for desktop?

They can.. question is whether there's enough money in it. Given the competition on the desktop front they have to keep pricing keen so may have to wait for better yields.
Posted by Dribble - Mon 07 Dec 2020 12:28

Zhaoman
The 16GB mobile 3080 is rumoured to be similar to a slightly tweaked desktop 3070. If they can do 16GB for mobile surely they can release a 16GB 3070 for desktop?