Overclocking expert der8auer has shared his unique perspective on the 'MLCC vs POSCAP' GeForce RTX 3000 GPU bypass capacitor debate. The growingly popular tech YouTuber introduced the new segment by saying he has tested numerous GeForce RTX 3080 and 3090 graphics cards already and never had any instability issues with out of the box clocks. However he noted that due to the nature of overclocking you will always hit a mark somewhere when an individual GPU will become unstable. 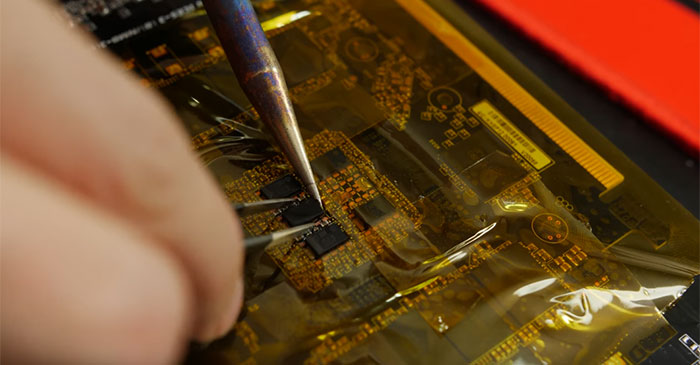 In his lab tests der8auer has found that that instability with these RTX 3000 GPUs has crept in between 1,960 and 2,080MHz - and the mix of 'MLCC vs POSCAP' isn't a definitive indicator of how high these cards can overclock. In previous years as an OC professional der8auer has often worked on capacitor mods, among other techniques, to push GPUs well beyond the clocks possible to the average enthusiast - swapping, or adding further banks of capacitors to keep GPUs stable under extreme stress.

Above you can see der8auer switch two of the Gigabyte card's stock 470u POSCAP capacitors with twenty 47u MLCC capacitors (unwavering soldering skills on display) before re-testing the GPU. The result of the modification is that he could manage to squeeze an extra 30MHz from the GPU before stability issues were evidenced...

In summary, der8auer reckons that the capacitor choice of certain AIBs isn't solely 'to blame' but it is a contributor to reported instability, hand-in-hand with the vBIOS enabled boost clocks. The whole drama could have been avoided if partners had had more time to test their wares and adjust vBIOS settings ahead of making them available to the public. Instead, nowadays "every single vendor is testing on the consumer," asserts the OC expert, with early adopters feeling the sharp end of this issue.

Gigabyte's statement asserts that the 'MLCC vs POSCAP' debate is of little value. It says that both types of capacitors have their characteristics and uses, as noted in our last article on this issue. Furthermore, Gigabyte says that it hasn't selected capacitor configurations based upon "using cheap materials," but rather it selected them as the best choices for the application.

MSI is equally bullish in backing its existing product designs. It used a "mixed capacitor grouping in its designs to benefit from the strengths of both SP-Caps and MLCCs". MSI says that all cards shipped have this mixed config and it stands behind this design. I think some early box art might have shown different capacitors beneath the GPU, which has caused some confusion. Again, MSI recommends the latest Nvidia GeForce driver version 456.55.

Note that both Gigabyte and MSI refer to 'POSCAPs' as 'SP-CAPs' in their statements.

testing on the consumer is right. It's all we've had in hardware and software for some time now. When the big boys (MS) do it and get away with it everyone else follows suit.
Posted by quatermass - Wed 30 Sep 2020 12:16
Does anyone trust electrolytic capacitors at all since 2010?

The huge dump of cheaply made caps onto the Western markets was so wide spread and I can't imagine what the big corporations had to do to keep it a secret from the main Press.

Nice one China….
Posted by Gentle Viking - Wed 30 Sep 2020 13:10
I have never worked in capacitors,but otherwise when i was young and brave i have been known to solder extra components to computer hardware in the pursuit of more speed.

It take a steady hand soldering a wire to 1 leg of a IC on a motherboard :-)
And a proper soldering iron too, luckily i had both, now i just have a proper soldering iron and i would need glasses aside for the microscope to see the IC leg.
Posted by QuorTek - Wed 30 Sep 2020 15:28
So the card is wild and unstable… that explains the low NVIDIA price to begin with.. a card that can not over clock?
Posted by mercyground - Wed 30 Sep 2020 17:04

quatermass
Does anyone trust electrolytic capacitors at all since 2010?

The huge dump of cheaply made caps onto the Western markets was so wide spread and I can't imagine what the big corporations had to do to keep it a secret from the main Press.

Actually that was Taiwanese company and it was a spy story gone wrong.
They stole the new formula from a Japanese manufacturer and didn't take the stabiliser solution.
Result the electrolyte broke down too early and turned into hydrogen gas, resulting in bad caps and bulging caps.