HEXUS has reported on Chinese chipmaker Zhaoxin a number of times in the past two years. The Chinese state/VIA (80/20) owned company has been in our news over its efforts to supply competitive home-grown x86 compatible processors to Chinese systems makers. Recently it announced that it was starting to distribute its CPUs to the DIY enthusiast channels in China.

Zhaoxin CPUs aren't really challengers if you have an ample supply of AMD and Intel x86 processors but understandably the Chinese government, and some other commercial interests, think it is a good idea to have a competitive roadmap in execution. The latest indications are that the 16nm Zhaoxin KX-6000 series chips are roughly compatible in performance to Intel's 7th gen Core i5 (4C/4T) processors. 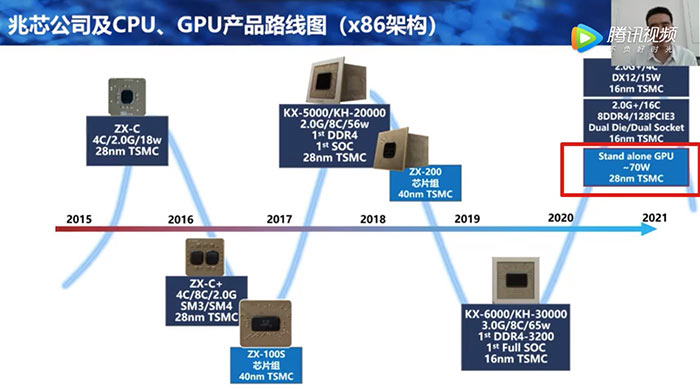 Now news has emerged that Zhaoxin has been developing and intends to release a discrete GPU product this year. cnTechPost reports that the revamped Zhaoxin website includes an embedded video from the firm, sharing the slide I have reproduced above. In the upper right hand side of the slide you can see that Zhaoxin says it is readying a "stand alone GPU," so an add-in-card. Furthermore, the GPU on the graphics card will be made on TSMC's 28nm process and will consume somewhere in the region of 70W under load.

That is all the info we have about this GPU from the new website/video/slide. However, previous information released regarding the 16nm Zhaoxin KX-6000 series, for example, says that an integrated GPU using VIA's S3 Graphics technology was included in the chip. One therefore might expect Zhaoxin will be producing discrete video cards using the same tech but with a bigger power budget. Perhaps Zhaoxin S3, Savage or ViRGE cards (or similar concoctions), will be on the computer store shelves in China in the New Year. 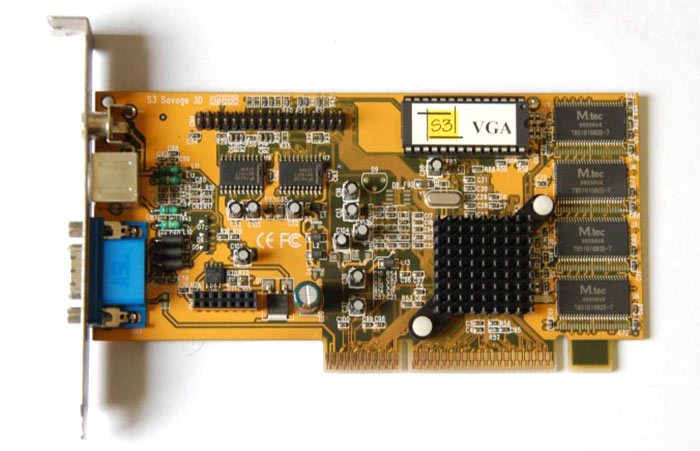 And old S3 Savage 3D graphics card - nostalgia for some

S3 Graphics was sold by VIA to HTC in 2011, probably snapped up for the value of its patents (especially S3TC texture compression), however VIA retained a license to use the graphics technology.

Posted by Core2Extreme - Fri 10 Jul 2020 13:56
This is interesting for the GPU implications, but also the geopolitical and IP ones. VIA and HTC are both Taiwanese companies, and if this winds up leading to a successful line of GPUs, that would more or less be enabling Communist China to enter a new market where they do not currently have a major offering. Thus, it would seem reasonable for the ROC government to take an interest both in Zhaoxin generally, and in VIA's use of their IP in it in particular.

And then there's HTC's angle. They may have agreed to let VIA continue using the S3 IP, but does that apply to minority-ventures in which VIA has a stake? That seems considerably less likely.

I'm not a journalist, but it would be interesting to read an article that goes slightly deeper into these questions.
Posted by QuorTek - Fri 10 Jul 2020 15:01
Just look at the speed and pace they go at…
Posted by Yoyoyo69 - Fri 10 Jul 2020 15:28
I was looking forward to China entering and eventually becoming competitive in the PC space, but with their very aggressive and dangerous political tactics, it's very likely they'll be locked out of world markets before they can compete with US companies.
Posted by half_empty_soul - Fri 10 Jul 2020 15:31
wonder how many malware and spyware we will get as a bonus
Posted by DevDrake - Fri 10 Jul 2020 15:45

about the same as now