In a piece of tech industry quaking news shared at Apple's WWDC, the Cupertino tech giant announced a two year x86 to Arm Mac CPU transition period. At last the rumours that had been bubbling beneath the surface for years precipitated the news that had been expected. Now, a previously unpublished slide from WWDC has been shared that casts some light on the GPUs that the new 'Apple Silicon' Macs are going to be using.

The slide above was shared by Longhorn on Twitter and is from a WWDC 2020 presentation dubbed Bring your Metal app to Apple Silicon Macs. "The future will be very interesting," commented the Tweeter. "MacOS Arm64 according to Apple removes support for AMD GPUs too, Apple GPUs all the way."

The presentation the slide is from goes some way to explaining to developers how they will translate or port your graphics-intensive app over to Apple Silicon - including Apple GPUs. It highlights that the Tile Based Deferred Rendering (TBDR) GPU architecture for Apple Silicon Macs is a significant step up from the Immediate Mode Rendering pipeline of older Macs. However, modern third party GPUs from the likes of AMD, Nvidia, IMG, Intel, and Qualcomm are tiled architecture compatible/capable too.

Whatever the case, it is important that Apple has made clear its intentions to optimised Metal performance on Apple Silicon Macs by leveraging its own GPU designs, named after the Metal API. 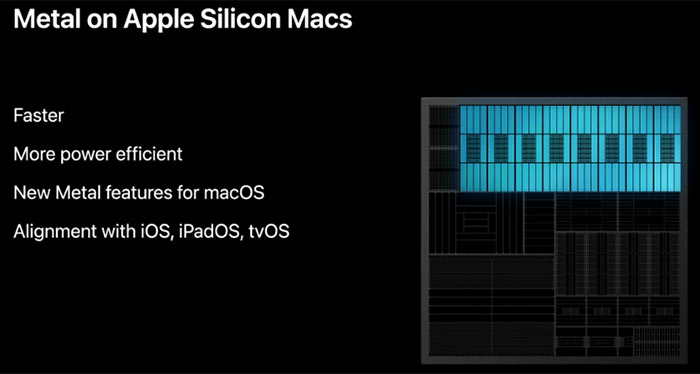 While one might be comfortable accepting that Apple's Metal GPUs are going to be fine and dandy in its consumer portables and desktops, there are questions about whether third party GPU architectures will be supported by higher-end Macs, like the MacBook Pro and Mac Pro machines. Currently GPUs from the likes of AMD do a lot of heavy lifting for Apple's pro-targeted machines and it will be very interesting to see if Apple has the confidence and capabilities to simply use its own processors, or will support AMD/Nvidia some way, like eGPU or accelerator AICs.

On the flip side could PC enthusiasts, one day, be buying Apple Metal GPU packing graphics cards to accelerate their 3D/XR games, apps and experiences?

Posted by HW90 - Tue 07 Jul 2020 10:15
I don't think Apple has any intention to continue their high end line up, so supporting more powerful GPUs likely isn't an issue for them.
Posted by DanceswithUnix - Tue 07 Jul 2020 10:43
If they cared about graphics they would use Vulkan to stay standards based and give themselves options for the future. Metal always seemed anti consumer to me.
Posted by watercooled - Tue 07 Jul 2020 10:52
I mean Apple have a lot of resources to bring to bear, but I wonder what's going to happen to the higher end of the market once they abandon AMD and Nvidia? High-end GPUs aren't something you can just start making overnight - just ask Intel, they've attempted it enough times!

Does this mean they're just doing away with the workstation market altogether?
Posted by Tabbykatze - Tue 07 Jul 2020 11:09
This is sounding more and more proprietary lock in and anti consumer by the moment. I get that in a small system like a macbook air you really will have to use an on die GPU but to make no indication that any other manufacturers would be included highlights that Apple wants to fully close the ecosystem.

It excites me because there is a strong chance that Apple might really be starting to find out how dangerous doing something like that is. But their phones and tablet markets will keep them afloat, they won't collapse.
Posted by John_Amstrad - Tue 07 Jul 2020 11:28
Apple was finished for me when they first soldered the CPU back in 2008-9.