The last time we focussed upon the Intel Xe DG1 discrete graphics card was during the CES 2020 event in Las Vegas. Intel provided us a closer look at the DG1, which it had started to send out to ISVs (independent software vendors) worldwide. In brief, the card was being distributed to developers to prepare them for the launch of Tiger Lake processors featuring the new Xe GPUs. 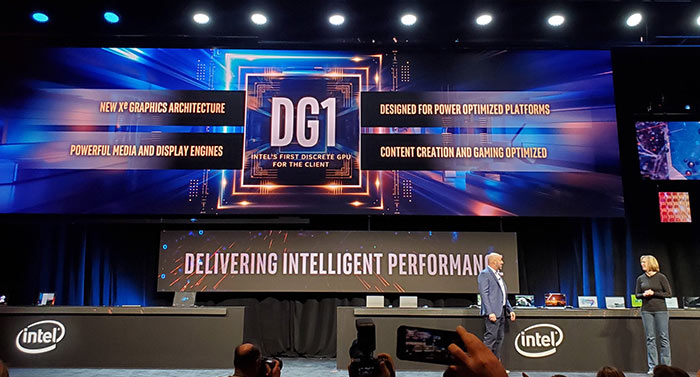 At the time of CES, and until now, we haven't had any official benchmarks or tests shared with us, and the technical details officially shared are rather light. Additionally, it is thought that the DG1, officially described as a 'software development vehicle', may never materialise as a shipping consumer product. 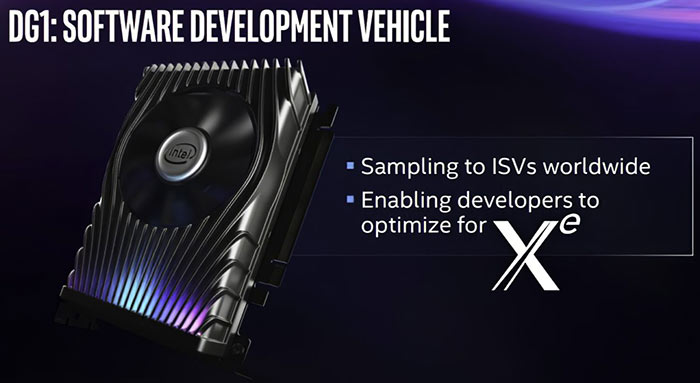 Now it appears that one of the ISVs has tested an Intel Xe DG1 on Geekbench and the results have been unearthed in the online browser by Twitter's Tum Apisak. While the Geekbench result makes no specific mention of 'DG1' the specs point to it being one of these dGPUs. 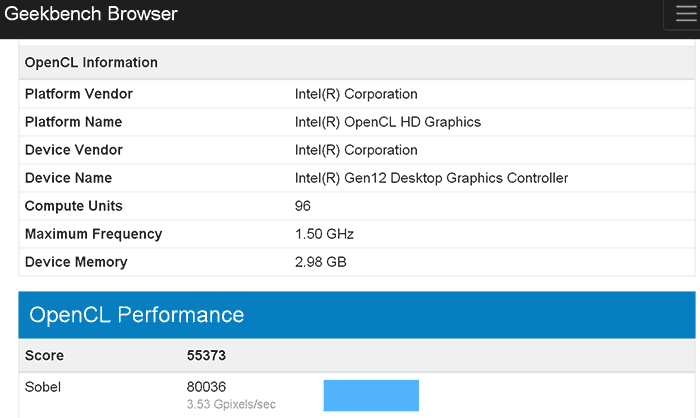 The ISV who tested the Intel Xe DG1 GPU did so in a system paired with an Intel Core i7-8700 processor and ran it through the OpenCL Performance tests. As you can see above, the 1.5GHz GPU with 3GB of VRAM scored 55,373 in the tests. This compares rather poorly against an AMD Ryzen 5 3400G packing Vega 11 at 1.75GHz, which scores 58,000+, but at least it is in competitive territory.

VideoCardz collated Tum Apisak's findings with some CompuBench results it found, and decided to tabulate the Intel DG1 card against the familiar entry-level AMD Radeon RX 5500 XT and Nvidia GeForce GTX 1650 discrete graphics cards. As you might guess from the above mentioned GeekBench results and comparison vs the Vega 11 iGPU, Intel's 10nm dGPU was cast under a very tall shadow by the competition.

Whatever the comparisons, this is still a good step for Intel to make and build upon. Back in January, Intel claimed that thanks to Xe architecture and 96EUs its Tiger Lake processors are going to deliver a "massive leap in graphics performance". Furthermore, the CPU cores will provide "double digit CPU performance gains," compared to Ice Lake, it claimed.

But this is being front runnered by Raja, the very man who caused the massive overhype for Vega which was a big leader into the loss of confidence into the RTG development.

And you can tell Intel isn't happy with him as all the marketing budget has been pulled, there is very little talk and no big events constantly being advertised and rammed down peoples throats.

Tabbykatze
I'm still maintaining that Raja can be a powerful force, but he needs a choke chain that gets pulled when he goes down a rabbit hole.

DanceswithUnix
I must say AMD seem to have come on leaps and bounds without him.

RDNA2 will be the telltale, if it is a resounding success then AMD has finally managed to get off of Rajas designs. The way he's been playing the Xe campaign is so reminiscent of Vega and the Fury ranges.
Posted by nobodyspecial - Tue 19 May 2020 13:23
You suck at OpenCL…Oh wait…Who's using it?..Never mind…Fake news, move along. Not that I believe in Intel or anything gpu wise. Just saying…Nobody cares about OpenCL. See Cuda/NV's workstation/pro share. Nuff said.