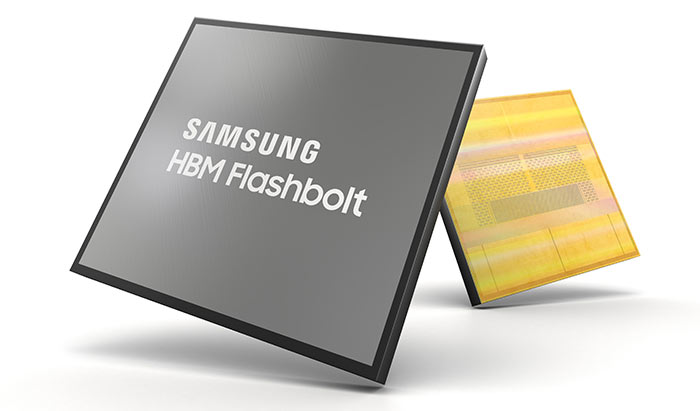 To recap on the capabilities of Flashbolt, this industry-first HBM2E memory is said to deliver 3.2Gbps per pin, which is a significant 33 per cent faster that previous generation HBM2. Furthermore, an HBM2E 16GB package can deliver 410GB/s data bandwidth. The maximum tested data rate exceeds this base line by some degree. Samsung has achieved transfer speeds of 4.2Gbps, enabling up to a 538GB/s bandwidth per stack in certain future applications. For previous gen comparison, Aquabolt maxed out at 2.4Gbps per pin or 307GB/s per stack.

Of course the capacity increase from Flashbolt will be welcome in high-end applications too. Samsung says that the 16GB capacity is achieved by vertically stacking eight layers of 10nm-class 16Gb DRAM dies on top of a buffer chip. Then the HBM2E package is interconnected in a precise arrangement of more than 40,000 TSV microbumps - with each 16Gb die packing in 5,600 TSV perforations. 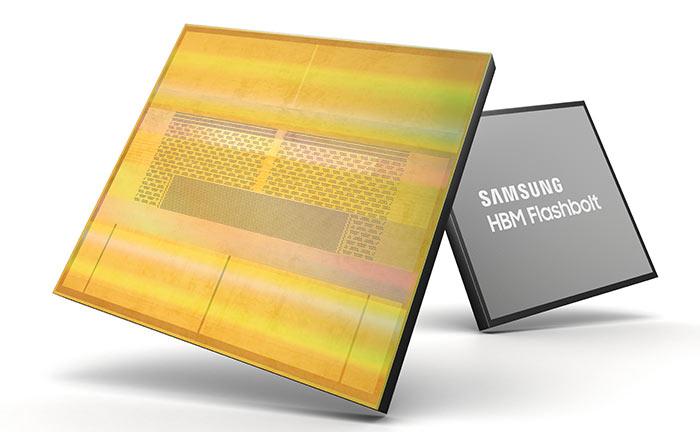 With GTC 2020 not very far away (March), perhaps Samsung will make some further announcements at this event - alongside Nvidia. Volume production of Flashbolt memory will begin in the first half of this year but Samsung says it will continue to supply partners with second gen Aquabolt memory for the time being too. SK hynix is also working on HBM2E, which is scheduled for mass production this year.

3dcandy
The name is better than the product….

I keep misreading it as ‘Flashback’.
Posted by nobodyspecial - Thu 06 Feb 2020 01:16
If you use this in anything besides a pro card (I'm looking at you AMD) you will lose money AGAIN and destroy yet another flagship launch. Two consumer launches with HBM/HBM2, and two failures that couldn't make money. Meanwhile, the other side chose easy, fast enough for current products, and no shortages, cheaper. See NVDA for how to get it right. Don't build products you can't make money on from day one if you are SMALL like AMD.

But, but, the price will drop later on the craptastic memory, and we'll finally make money. LOL. NO, shortages, and higher cost will kill all profits if you can even get them out the door and by the time you do (see history), it won't matter because we'll be on the next version anyway. Please don't use HBM on ANY consumer cards until you can PROVE bandwidth is the REAL issue. Which NVDA clearly proved it isn't, as none of their consumer cards are slow at the top right? You did it wrong if your chip requires expensive crap to work that the other guy doesn't require. Work more on shrinking images in the pipeline, or pricing correctly so you can afford to do this by default. You seem forced to go HBM because you can't shrink the cost of the data running in the pipeline.

HBM will never drop in cost if so few use it each gen and it's really only worth it at pro levels (and pricing). I don't agree with being second on every feature, but until NV says HBM is being used on consumer cards (below the top) you are wrong using it. They can bring cost down, AMD can't. It is extremely rare to see the little guy set a new standard unless the entire world wants it (AMD64 for example, only because everyone+dog wanted it and NOT itanic).

The future is cheaper, easy to produce and capable of the job at hand, not more (hence price, and NV not using it much except prosumer+). This bandwidth isn't needed at home yet (at some point sure, but even then I expect cheaper GDDR6x or GDDR7 etc). I hope MU is working on GDDR6x soon. :) A simple cheap extension of current tech that makes higher priced new tech pointless for all but PROS (where it should be until cheap). I can see it on a Titan, but again, prosumer and expensive (I said used by NV on lower cards, then AMD should move if actually REQUIRED). Buzzwords like HBM mean nothing if all it serves to do is cause a shortage, inflate your price vs competition, and make no profit while doing it all. BAD.