This weekend a Redditor shared some interesting marketing materials for the upcoming AMD Radeon RX 5500 graphics cards. Following this official AMD link you will find various sales tools including a 'how to sell' sheet, a 'quick reference' comparison guide, and a flyer with a spider chart.

AMD announced the Radeon RX 5500 series, based upon the 7nm Navi 14 GPU, back in early October but we are still waiting for hardware to arrive in its various forms; as partner add-in-cards, in pre-builts, and in laptops (RX 5500M). These products are supposed to start arriving this month, from previous indications. 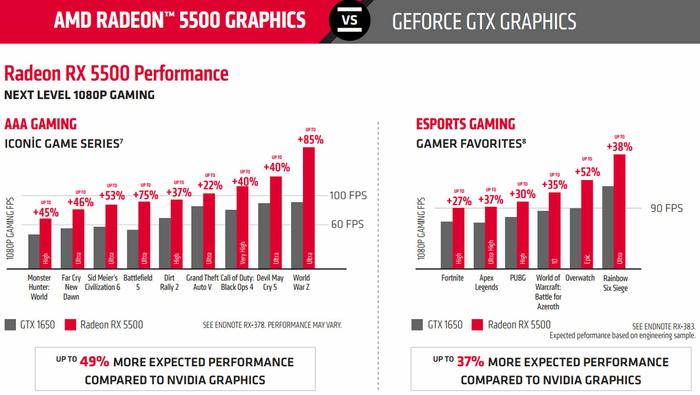 We have some indicative benchmarks for the Radeon RX 5500 directly from AMD, but it isn't great to have only manufacturer sourced benchmarks as they are obviously selected to show their hardware in the best possible light. So it will be good when we can get samples of RX 5500 products to independently test and also find out things like precise pricing and availability.

The newly unearthed marketing slides help put the Radeon RX 5500 into perspective and flesh out what we know. All the slides again show 'the competition' to be the Nvidia GeForce GTX 1650, with the RX 5500 coming comfortably ahead by "40 per cent in AAA Gaming" and "37 per cent in eSports gaming". That is indeed impressive if there is price parity. AMD also talks up its Radeon Adrenalin drivers with Radeon Anti-Lag, Radeon Image Sharpening, Fidelity FX and FreeSync tech.

The market positioning charts show some blanks in AMD's strategy, as seen today. In two charts in the quick reference guide AMD places the Radeon RX 5500 in its own product stack and pitted against Nvidia offerings. In both cases the RX 5500/M is said to be a competitor against the GTX 1650. However, the gap above and below it seem quite wide - the next card up is the Radeon RX 5700 (against Nvidia RTX 2060) and the next card down is the RX 560 (touted as a GTX 1050 competitor).

Notably, AMD has removed any references to RX 590, 580, 570 graphics cards in these latest marketing materials. That raises the question of this trio of cards being phased out shortly. Perhaps the big blank where these cards should reside (and the competitor GTX 1660 variants) is shortly to be filled by a new Navi offering(s) and AMD can't mention it right now as these products are yet to be announced. This seems the most likely state of affairs - rather than the notion that AMD planning to ignore the large volume selling GTX 1660/Super/Ti competitor segment.

… Perhaps the big blank where these cards should reside (and the competitor GTX 1660 variants) is shortly to be filled by a new Navi offering(s) and AMD can't mention it right now as these products are yet to be announced. …

Are you suggesting that there might be a graphics card released into the product stack that sits between the RX 5500 and the RX 5700? But what would it be called? How could they fit a product into the stack there?! It just makes no sense ;)
Posted by darcotech - Mon 11 Nov 2019 12:07
Radeon 5600 series?!

Surely not. 5600 just sounds plain stupid. Five followed by a six? Like how children count? It's just pedestrian.

Surely not. 5600 just sounds plain stupid. Five followed by a six? Like how children count? It's just pedestrian.

Clearly, scaryjim was imlpying that AMD would release the 5570 and 5590 at some point in the future. :)

Not sure if that was sarcasm ( :-) ) or you actually think that. Anyways…