Last month HEXUS reported upon Intel's stated intentions to bring integer scaling graphics support to Intel Graphics this year. The report was based on an Intel Reddit AMA and a Lisa Pearce Tweet, so it is good to see that Intel has now followed up with more official details via an Intel Game Developer Zone blog post. Enthusiasm for Intel's driver level support for integer scaling seems to be strongest within the retro gaming and emulation communities. However, it won't support source resolutions below 640 x 480, initially.

Importantly, and as we already knew from last month's report, Integer Scaling Support for Intel graphics will only be available with the following conditions met:

In the introduction to its blog post, Intel highlights the appeal of Integer scaling (IS) and a Nearest-neighbour (NN) image scaling modes. In brief these scaling techniques preserve the sharp, blocky images of pixel/retro game that deliver their distinctive look. In the Intel Graphics Command Centre (IGCC) Intel is going to provide toggles for both IS and NN, for added flexibility. 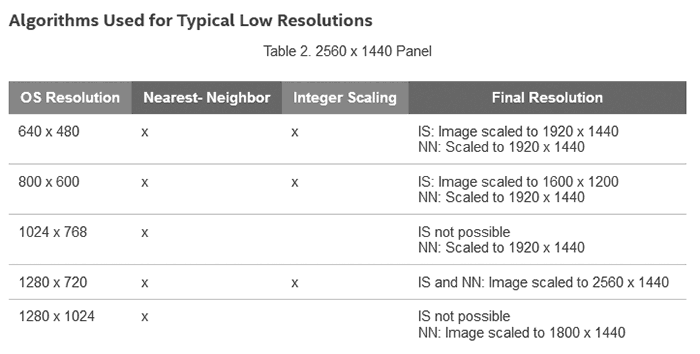 There are a number of factors determining the availability of pure integer scaling. Intel provides a trio of common monitor resolution charts to show which kinds of scaling are workable on each monitor, depending upon source game. Above I've included the 2560 x 1440 monitor table. Below are some example scenarios for you to ponder over.

Reading through the examples above, you can see that the late August driver will allow users to force black borders with IS restricted to the greatest possible integer. Within the driver, the 'Maintain Aspect Scaling”' option will yield the best experience when NN-mode is enabled, says Intel.

Intel provided some screenshots of NN-IS, and NN-non IS games running on a 4K (3840 x 2160) monitor in various source resolutions upscaled. However, it only provided very small screengrabs (375 pixels wide) in each case, which isn't so useful for pixel peepers. As for supporting game resolutions below 640x480 pixels, Lisa Pearce says that lower resolutions will be considered in subsequent driver updates.

Bit useless because either way of the fence of 1080p or 1440p you will have a bad scale.
Posted by Irien - Mon 15 Jul 2019 13:54
I would have thought lower resolutions would be essential for this, as surely the big appeal is for the emulator crowd? Anything pre-PS2 (and even then!) isn't going to be outputting 640x480. Although, perhaps rely on the emulator to scale below that? But then why have the feature if the emulator is scaling?

Also, is 1:1 non-scaling offered in place of integer for the other resolutions on the list? I ask, because it'd make sense to “letterbox” a 1920x1080 or 1280x1024 image on the screen rather than scale it *if* that kind of scaling has been selected, as the user clearly wants the sharpest image possible. ie. monitor would run at native res, but letter-box the image unscaled in the centre.

Edit: re-reading, yes, 1:1 is used when scaling not possible, so that's fine.
Posted by koblongata - Mon 15 Jul 2019 19:49
720P AND 1080P gaming on a 4K display.. PIXEL PERFECT as if it was played in native resolution, this is some disruptive sh*t… Why no one sees this? While 4K is becoming de facto for TVs, fully 4K capable video cards are still in thousand dollars range! Forget about fancy upscaling sharpening tech, Integer Scaling is simply the way to go. Com'on.
Posted by Tabbykatze - Tue 16 Jul 2019 08:48

koblongata
720P AND 1080P gaming on a 4K display.. PIXEL PERFECT as if it was played in native resolution, this is some disruptive sh*t… Why no one sees this? While 4K is becoming de facto for TVs, fully 4K capable video cards are still in thousand dollars range! Forget about fancy upscaling sharpening tech, Integer Scaling is simply the way to go. Com'on.

Integer scaling is not perfect, it will not stretch or squish so therefore unless the source image is the same ratio as the destination screen it just moves a problem. It will help and will make old source/low-res-on-high-res images look better but it isn't really disruptive nor is it rasterisation-level GPU advancement. It's just “oh, that's cool”.