HEXUS wrote about the launch of Microsoft's new DirectX Raytracing API, an exciting new feature in DirectX 12, when it was announced on Monday at GDC 2018. At the time we heard about the lavish visuals which could be delivered with hardware accelerated real-time raytracing support. GPU makers AMD and Nvidia showed their support for the API, as did games developers with various graphic engines such as Unreal Engine, Frostbite, and Unity lining up to support DXR.

In our article a couple of days ago we described the difference between current game engines, using rasterisation techniques, and the possibilities open to real-time raytracing game engines. We even embedded a hot-off-the-press Microsoft DirectX Raytracing example video from Remedy. However, to really see the benefits I think an A/B game engine test would probably be most illuminating. Today, thanks to Futuremark we have a nice new video showing the fantastic graphics available via DirectX Raytracing (above), and a series of scene comparison GIF images with the API toggled on and off (below).

The topmost embedded media from Futuremark shows DXR in real-time action. You can watch this video on YouTube in up to 1080p. The video doesn't contain comparisons but is a straight tech-demo, or showcase, for accurate real-time reflections in a game style 3D environment. Take a look yourself and judge whether these visuals represent a major step for gaming or not. 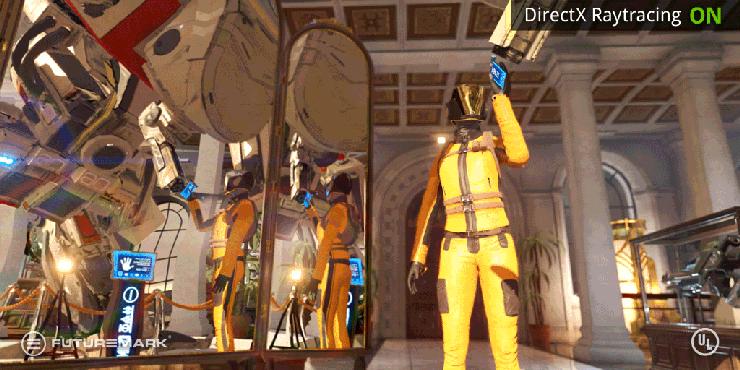 One of the most markedly different toggled scenes is striking due to Microsoft's DirectX Raytracing API reproducing reflections of objects that exist outside of the screen space. You can see this toggle in the image above. Below you can see how raytracing adds a great depth to the scene, thanks to the complex reflections that are modelled. 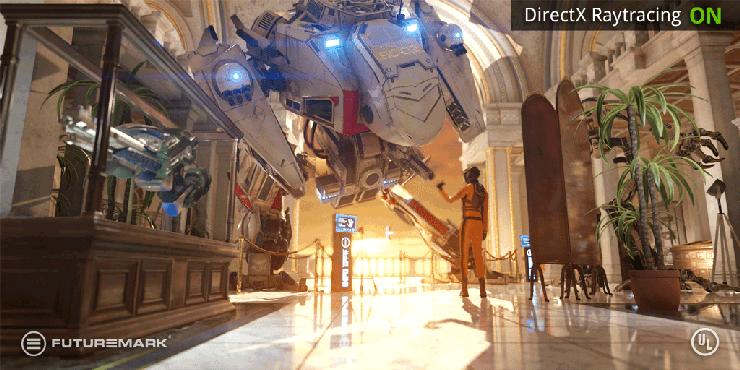 Interestingly, Futuremark says that with modern GPUs "it's now possible to use rasterization for most of the rendering and a smaller amount of raytracing to enhance shadows, reflections, and other effects that are difficult to achieve with traditional techniques". The DXR showcase video is footage taken from a current generation system, using current GPU hardware, and is said to be "relatively easy to implement into our DirectX 12 game engine".

With the above in mind, Futuremark is readying a new 3DMark benchmark test with DXR option(s) that it plans to release before 2018 is out.

That's pretty awesome. Now if they can do that real-time in stereo, then you could walk around inside a VR film.