On the day Windows 11 officially rolled out, the HEXUS news section discussed the OS's new features, how to upgrade, and the potential for end-user teething troubles. We have some news on that inevitable latter aspect of the new OS, as it has become apparent that Windows 11 isn't getting the best out of AMD Ryzen processors, in certain applications.

Microsoft and AMD have found two ugly wrinkles in Windows 11 on AMD Ryzen chips; the first one means you might see slower app performance compared to Windows 10 (as much as 15 per cent slower in eSports games), and the second means that Windows isn't taking heed of AMD's 'preferred core' technology (again to the detriment of performance). 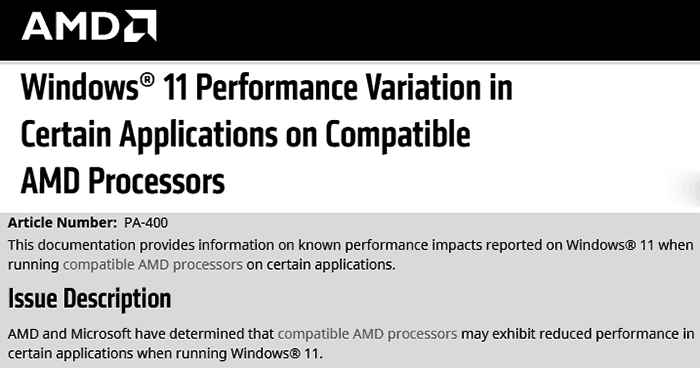 You can read about the impacts of these Windows 11 coding flaws, and their proposed resolutions on a support page headlined Windows 11 Performance Variation in Certain Applications on Compatible AMD Processors, on AMD's website. Importantly, AMD is working closely with Microsoft on resolving the issues and reckons patches addressing the performance hits will arrive later this month. 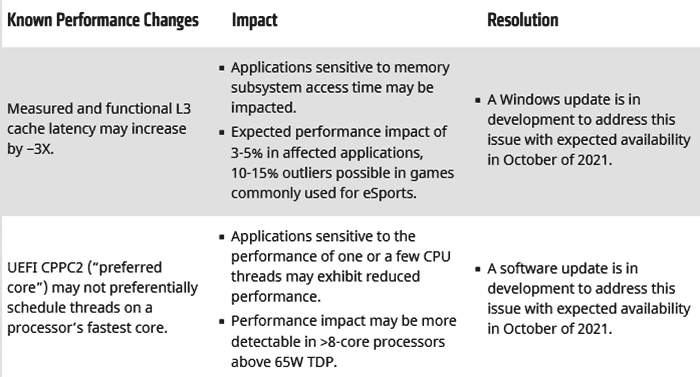 Above you can see that the performance reductions observable are rather variable; from the negligible to 15 per cent, with eSports titles seemingly particularly badly affected by the L3 cache latency problems.

In a statement to HEXUS, AMD had this to say: "AMD is aware that users may see a performance impact on certain applications when installing the initial release of Windows 11 on systems powered by compatible AMD processors. AMD and Microsoft have identified two issues and we are working closely to release updates that address both."

Microsoft tells users how to bypass the Windows 11 TPM 2.0 requirement

Basically it is just a guide to editing a registry value, which means the Windows 11 updater software will bypass the check for TPM 2.0. Microsoft warns users about possible calamities should they mess up the registry edit, and that there are still risks in installing Windows 11 on devices that don't meet requirements.

Posted by Rubarb - Thu 07 Oct 2021 10:41
Some launch ehh?
All that time in testing and dev and they still messs it up with the most popular cpus atm.

Rubarb
Can't help thinking windows 11 was just an excuse for a big backhander of cash from intel and dell etc.

It is easy to imagine a brown envelope changing hands with a whispered “How much to make AMD suck on release so we can say they have compatibility issues?”. I suspect simple Microsoft incompetence is the standard issue though :)
Posted by Tabbykatze - Thu 07 Oct 2021 12:16

Rubarb
Can't help thinking windows 11 was just an excuse for a big backhander of cash from intel and dell etc.

“never attribute to malice that which can be adequately explained by stupidly. Unless it involves Intel. Then it's malice every time”.