We haven't had much news about computer design and brains this year, but last week researchers from Samsung announced a 'copy and paste' 3D brain chip design, and Intel has now announced its second-generation neuromorphic research chip. Intel Loihi 2 follows three years after the first generation part with many silicon advances, and the addition of the open-source Lava software framework.

Intel says it has been inspired to developer Loihi further, as many emerging AI applications "require fundamentally new approaches". Despite all the research in conventional and parallel computing architectures so far, "biological neural circuits remain unrivalled in their ability to intelligently process, respond to, and learn from real-world data at microwatt power levels and millisecond response times," Intel reminds us.

Interestingly, a pre-production version of the Intel 4 process, which relies heavily on EUV lithography, has been used to fabricate Loihi 2. This has helped, alongside architectural design changes, to make the new gen part smaller and more powerful than ever. Some quick facts about Loihi 2 compared to its predecessor are that it offers; up to 10 times faster processing, up to 15 times greater resource density, with up to one million neurons per chip (compared to 128k), and improved energy efficiency. Check out the table below for a fuller comparison. 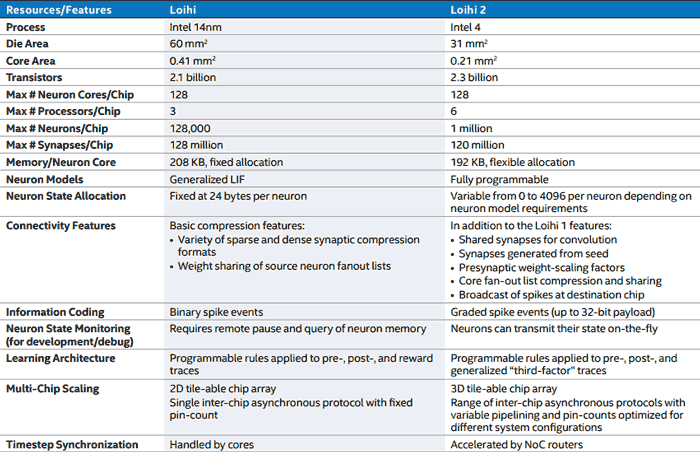 The Lava software framework addresses was designed to be a common software framework for the neuromorphic research community. Intel says that it is an open, modular, and extensible framework where devs can "build on each other's progress and converge on a common set of tools, methods, and libraries". Lava is heterogeneous architecture friendly, which means that developers can start to build neuromorphic applications without access to specialized neuromorphic hardware. 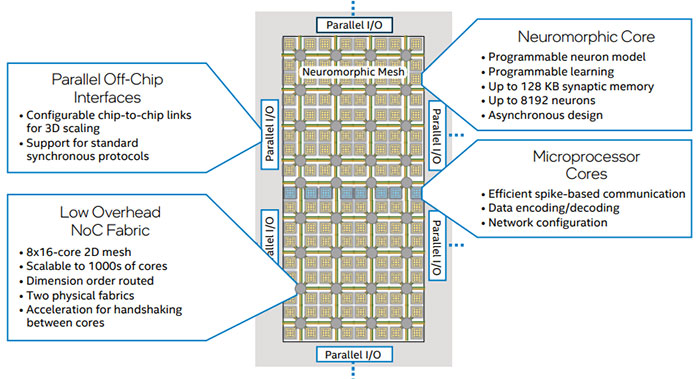 The path to commercialisation of neuromorphic computing has been made clearer by Loihi 2 and Lava, it is claimed. Intel says its mix of hardware and open-source software will put important new tools in the hands of an expanding ecosystem of neuromorphic researchers that are re-thinking computing from its foundations. With collaboration between industry, academia, and government researchers and developers, it is hoped that worthwhile breakthroughs in intelligent information processing will come to light.

Intel has a large number of Loihi testimonials (PDF) which appear to confirm its potential in the fields of; intelligent edge computing, railway route planning, as a rival to quantum annealing approaches for solving hard optimization problems, in robotic arm use, for drone control and flight planning, and more.

I think some kind of specification would be nice, without having to start digging deeper?

7nm process, Intel are just lying in the hope people who haven't done their homework don't get it and think it is better than 7nm.

Surely there's got to be some sort of come back for Intel on this, it is misleading, what does the 4 actually stand for? I suspect AMD might start renaming their processes soon.
Posted by Tabbykatze - Fri 01 Oct 2021 21:10

bae85
7nm process, Intel are just lying in the hope people who haven't done their homework don't get it and think it is better than 7nm.

Surely there's got to be some sort of come back for Intel on this, it is misleading, what does the 4 actually stand for? I suspect AMD might start renaming their processes soon.

There's no industry standard for node size naming and if Intel were to pulled up on calling it Intel “4” without actually correlating in any way to node size then both TSMC and Samsung would be caught in that as well.

It's just an arbitrary number and Intel decided to play the game and make their similar node sizes to competitors either have same numeric values or one lower and therefore to the dumb, the “better”.
Posted by six_tymes - Sun 03 Oct 2021 16:18
Intel, always publishing break throughs, then amd copies and claims they did it first.
Posted by Tabbykatze - Mon 04 Oct 2021 07:43

six_tymes
Intel, always publishing break throughs, then amd copies and claims they did it first.

Since when has that been a thing…?