Over the weekend, a tipster sent an Intel roadmap to VideoCardz. The roadmap isn't for the PC DIY, enthusiast or retail PC market but concerns 'Intel Commerical Client Products' for enterprise organisations – specifically its vPro processors. The major piece of information here is that we should expect the Intel Alder Lake-S vPro and Alder Lake-P vPro processors to launch in early 2022. However, this roadmap is dated January 2021, which is a long time ago in tech. 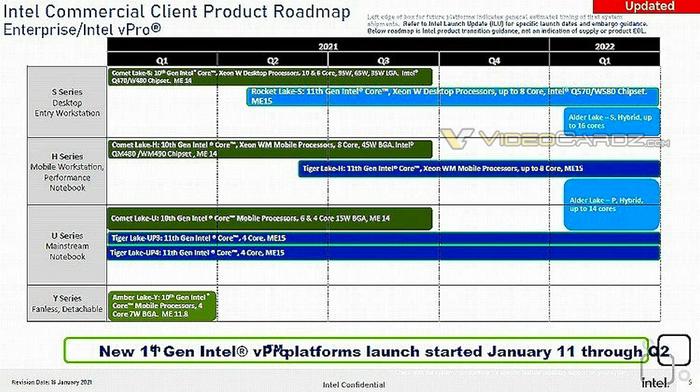 The source image bears the hallmarks of a PDF without fonts embedded being viewed on another machine with a different set of fonts, and then being screen-grabbed. I've reproduced the original full size image from VideoCardz above, click it to zoom in and to make it more readable.

In the roadmap, you can see that Alder Lake vPro processors are scheduled to arrive together, sometime in January next year. The desktop processors will be targeting entry level workstations. Like the non-vPro models we think we have a good idea about, the biggest Alder Lake-S vPro processor will come with 16 cores. These will almost certainly be eight performance cores with hyperthreading, and eight efficiency cores, resulting in a chip with 16C/24T.

Moving along to the Alder Lake-P vPro; this is aimed at a wide number of targets including; Mobile workstations, performance notebooks, and mainstream notebooks. These hybrid processors will come packing up to 14 physical cores. Previous leaks and rumours point to this configuration being six performance cores with hyperthreading, and eight efficiency cores.

VideoCardz observes that Intel vPro laptop processor models offer a maximum of 14 cores, but the consumer line-up will include up to 16 physical cores as part of the H55 line. Intel has simply decided not to add such muscular configurations to the vPro line.

Looking back over previous generational releases, the vPro line has arrived about one or two months after the launch of the mainstream processors.

Even an exceptional scheduler is going to struggle to make that quick.