AMD is making CPU and mobile graphics announcements for the virtual Computex trade show. The two-pronged approach sees the debut of two desktop Zen 3-powered Ryzen chips housing integrated graphics and the release of mobile Radeon GPUs based on the latest RDNA 2 graphics. 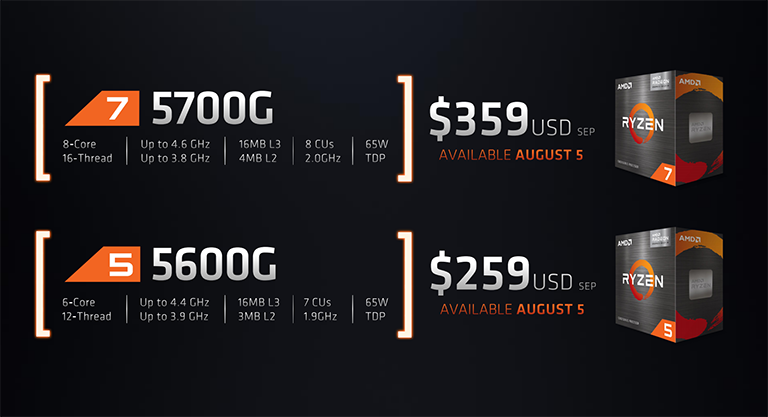 Focussing on the CPUs here, until now AMD hasn't addressed the desktop market which desires strong single- and multi-core CPU performance alongside integrated graphics, thus doing away with the need for a discrete video card.

AMD achieves this by effectively scaling up its latest laptop processors. The Ryzen 7 5700G has already been announced as an OEM part on April 13. Set to be available to consumers by August 5, the 65W chip offers base and boost clocks of 3.8GHz/4.6GHz, respectively, and tacks on established Radeon Graphics in a 512-core configuration (8-CU) running at up to 2GHz. 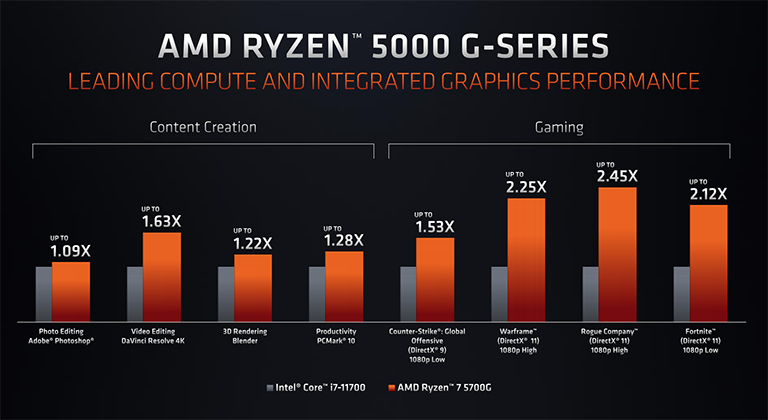 The CPU portion of the chip isn't quite as robust as the standard Ryzen 7 5800 (OEM), however, because it features only half the L3 cache and a narrower PCIe 3.0 interface. Nevertheless, this desktop-optimised 'Cezanne' processor is an interesting choice at $359 for markets such as HTPC or those only needing light gaming credentials from their PC. Think of it as a mobile Ryzen 9 5900HX in an AM4 package instead of laptop FP6.

Switching down, the same blueprint is used for the Ryzen 5 5600G. This six-core, 12-thread chip copies the socket change and offers base and boost speeds of 3.9GHz/4.4GHz, respectively. This time, the Radeon Graphics use a 7-CU arrangement totalling 448 cores that run at a maximum 1,900MHz. Again, it's mostly like a mobile Ryzen 5 5600HS presented as an AM4 solution.

The chip won't be quite as fast and versatile as the full-on Vermeer Ryzen 5 5600X for the reasons explained above, but at $259, puts further pressure on rival Intel's mainstream 11th Gen CPU stack that usually arrive with integrated graphics in tow. 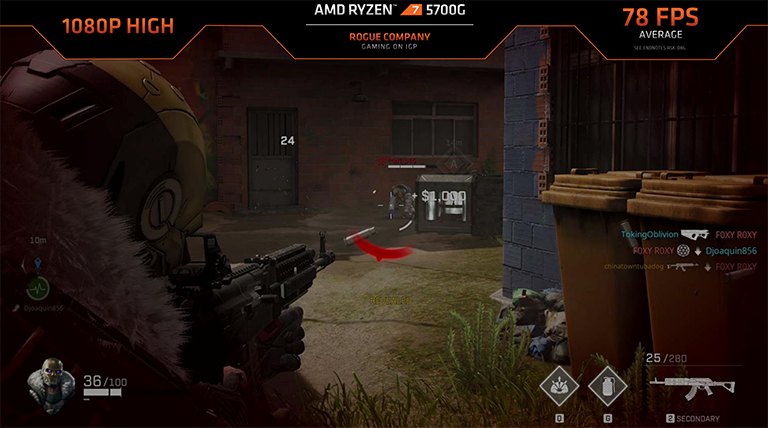 AMD is filling an obvious gap in its CPU portfolio by releasing chips with Zen 3 cores allied to proven integrated graphics, albeit from the last generation.

What are your thoughts? Do the new APUs sound good, or do you feel there is no need for such products in today's world?

ik9000
So how does this compare to the 5800U etc don't those also have onboard graphics? Or is the difference that this is available as a part to consumers not just OEM builders?

The Ryzen 5 5600G has been tested by UFD Tech recently:
https://www.youtube.com/watch?v=ReN06Kw4y4I

In some games in can be upto 10% slower,and even in the odd game a few percent faster than the Ryzen 5 5600X. However,in some MOBA games the reduction of L3 cache to 16MB,can cause a 50% reduction in performance. It also lacks PCI-E 4.0 apparently(24 lanes of PCI-E 3.0 instead of PCI-E 4.0 lanes).
Posted by Irien - Tue 01 Jun 2021 11:04
Cat - I think this continues AMDs approach (not that I necessarily agree) of the CPU-only versions being targetted to people who will use a GPU, with the APUs aimed at those who don't have a need for dedicated GPU.

These APUs are definitely needed (esp in a GPU shortage) for those with no interest in gaming or GPU-heavy work. Intel need competition in the 150-300ukp market, and that means processors with integrated graphics. Glad AMD are stepping up (although prices feel 50ukp too expensive).
Posted by thewelshbrummie - Tue 01 Jun 2021 20:54
There's a few issues here to break down:

No 5300G for retail? The OEM chip is ideal for my HTPC replacement but the article implies that AMD aren't making that chip available at retail. That's a problem as I don't need more than 4 cores so would rather save money. With the entire 4000 series being OEM only as well, that only leaves the Zen+ based 3200G for £185 (around double MSRP), or an Intel build - which right now makes more sense considering the 10100/10105 is around £120 and has HT whereas the 3200G does not. And dropping down to dual-core options doesn't get me much of a performance improvement over my existing i3-3220T.

The lack of PCI-E 4.0 can be justified on the basis of these APUs being in builds without a dGPU, but the reduction of L3 cache does appear to affect performance - that doesn't come across as a great move.

tbh I'm not sure I'm happy with AMD making their APUs a very different chip to their CPUs as there's a clear difference between a 5600X and the 5600G. Personally I prefer Intel's route of the -F chips with a disabled iGPU being otherwise the same.