AMD has launched its Cezanne APUs for desktops. The new AMD Ryzen 5000 G-Series Desktop Processors with Radeon Graphics are now official and there are six model choices ranging from parts with 8C/16T with boost clocks up to 4.6GHz, to parts with 4C/8T and a 4.2GHz boost clock. You can find the six processors outlined on AMD's official desktop APU website or just scroll down for my table below. 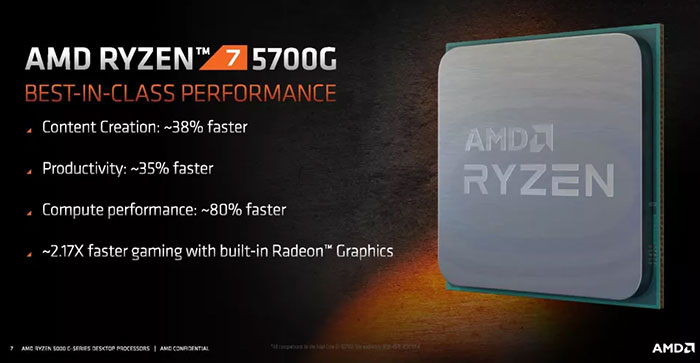 Cezanne APUs mix Zen 3 CPU cores and Vega GPU cores for "the best of Zen 3 1T and nT performance" as well as "great gaming and creation with or without a dGPU". AMD provided various performance comparison slides pitting the new Cezanne chips against 10th gen Intel Core processors at similar RRPs. I've embedded some of these below, as well as the interesting intergenerational comparison of the Ryzen 7 5700G vs Ryzen 4700G in a mix of content creation tasks.

OEM only? No, but you'll have to wait

In an email to HEXUS, AMD said that the Cezanne chips outlined above are going to be available in "new exciting OEM desktop systems in the coming weeks". However, AMD has been quoted elsewhere as saying that it will make the new Cezanne desktop APUs "available for DIYers to purchase in the channel later this year".

It will be interesting to see what new pre-built desktop systems pop up offering these processors, and we can get a look at third party benchmarks. Of course most HEXUS readers would prefer to have these Ryzen 5000 G APUs available for DIY purposes ASAP.

Posted by mojothejester - Wed 14 Apr 2021 11:03
So for use with discrete graphics card, they've compared to their own previous version and not an intel cpu.

For onboard graphics they've compared with the intel cpu and not shown what improvements they've come up with over their own previous gen APU?

Certainly stands out from the crowd. Be interesting to see what the availability ends up being like, as well as the cost.
Posted by [GSV]Trig - Wed 14 Apr 2021 12:21
And when can we actually get hold of them officially rather than having to get them on the bay from China…?
Posted by QuorTek - Wed 14 Apr 2021 12:30
Why dont they make motherboards with 8 or more CPU slots and make efficient mining rigs out of it, instead of having to hoard the big GPU cards that we crave for… that remark goes towards both green and red team of course… and wonder if Intel is gonna be Scalpware as well.