You are here:
CPU Storage News

Intel's Ryan Shrout, the firm's Chief Performance Strategist, has taken to Twitter to share a sneak peek of the Intel Core i9-11900K's PCIe Gen 4 storage performance. Of course, he wouldn't be doing this if there wasn't something to boast about and a like-for-like benchmark run vs a system packing an AMD Ryzen 9 5950X shows the Intel system in a favourable light.

Shrout's hand-picked test is the PCMark 10 Quick System Drive benchmark. In this test he says the Intel Rocket Lake chip is 11 per cent faster than the AMD consumer flagship processor – a worthwhile improvement, some would say.

A link provided by Shrout details the specs of both the Intel and AMD PC systems. Various folk pointed out a lack of detail about how the SSDs attached to the respective systems, so the Intel Chief Performance Strategist had to reply to clear up this query, asserting that both systems used the 1TB Samsung 980 Pro installed on an x16 PCI riser card.

Thanks to the anonymous HEXUS tipster for the Tweet link.

BenchLeaks compares those scores against the AMR Ryzen 7 5800X, against which the new Intel chip fares quite poorly. However, perhaps a better comparison might be against the previous gen Intel Core i5-10400, which shows a significant intergenerational improvement from Comet Lake to Rocket Lake. In this comparison the new RKL i5 CPU was 24 per cent faster in 1T tests and 8 per cent faster in nT Geekbench tests. 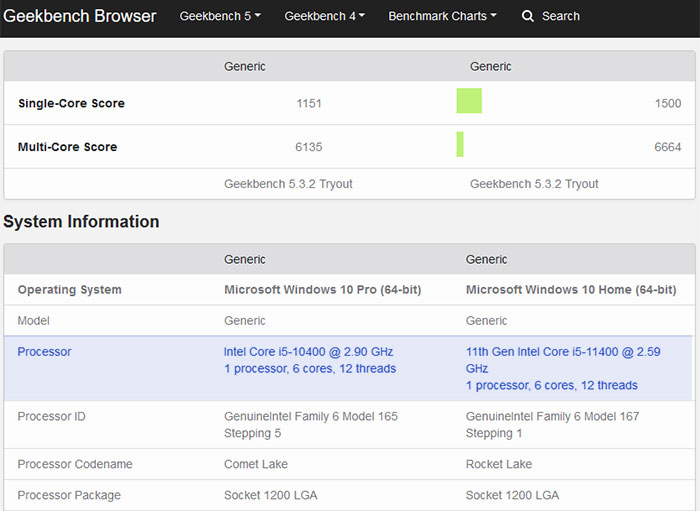 The RKL-S uplift is definitely a good sign for IPC, as the new Core i5-11400 only has a 100MHz faster boost clock than its predecessor. Please remember to take these leaked benchmarks with a larger pinch of salt than Intel PR ones.

Posted by Tabbykatze - Wed 24 Feb 2021 15:04
You forgot to note about the “Quick Storage Benchmark” that it specifically says it's to “measure the performance of small system drives from traditional spinning drives (HDDs) at the low end and entry-level PCI Express SSDs at the high end”.

So a PCIe 4.0 high performance SSD is likely being CPU constrained by the method this benchmark utilises to analyse the performance of the SSD.

That, and it's Ryan Shrout so anything he puts up should be criticised from end to end quite harshly due to his history with AMD benchmarking.
Posted by Corky34 - Wed 24 Feb 2021 15:41
From the people who say we shouldn't be using benchmarks but ‘real world’ performance comes, a benchmark. ;)
Posted by LSG501 - Wed 24 Feb 2021 17:40
So that would be a full, non trimmed, drive on the AMD system and an empty one on the Intel then….yes I'm being cynical, I'll wait for unbiased reviews.

There are so many ways to ‘nerf’ the performance of an ssd drive in benchmarks I wouldn't take one from a company who is ‘on the back foot’ at the moment too seriously.
Posted by trillo_del_diavolo - Wed 24 Feb 2021 18:11
Yeah it will remain in the shelves for a long time…
Posted by philehidiot - Wed 24 Feb 2021 21:38
It's a relief to see that everyone is sceptical about anything from Intel, no matter how minor.

Bearing in mind this really is scraping the barrel. Most consumers have more storage performance than they know what to do with. For me, for general computing tasks, storage has not been a bottleneck since my first X-25M SSD. For silly tasks which should really necessitate a Threadripper and semi-pro storage that I'm trying to do on a consumer grade system, well yes it bottlenecks. But usually for short bursts that cost me about a minute a week averaged over a year.