Intel is using the virtual Consumer Electronics Show (CES) 2021 to officially unveil next-generation CPUs. It's no secret that desktop 11th Gen Core is around the corner. Codenamed Rocket Lake, it represents the first major architecture revamp since 2015. Built using the Cypress Cove CPU architecture and Xe GPU, there's much to be excited about in early 2021.

During a livestream today, Intel provided some very high-level details on what to expect from Rocket Lake-S. Offering up to 19 per cent instructions-per-clock (IPC) CPU improvement generation over generation, along with higher frequencies, Intel hopes 11th Gen can wrestle the mainstream performance crown back from AMD's Ryzen 5000 Series of processors. 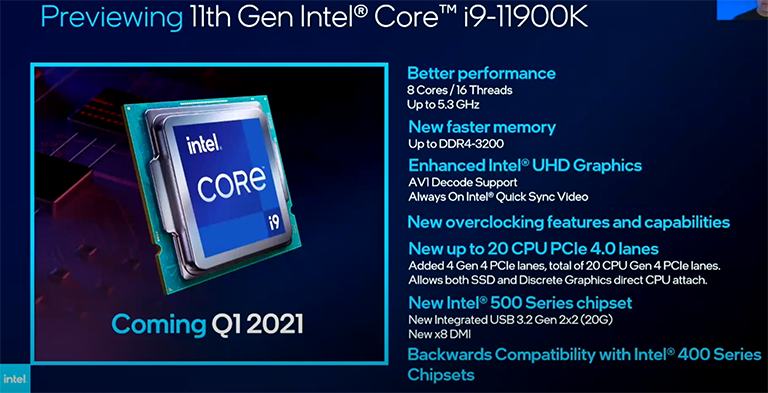 11th Gen desktop won't usurp the best mainstream Ryzens because Rocket Lake-S actually goes backwards in terms of core count, dropping from the 10C20T on 10th Gen Comet Lake to 8C16T here. A major part of the reason rests with having enough die space to integrate the all-new Xe graphics that promise up to 50 per cent better performance, and it's one area where rival Ryzens, for now, are not as good.

Intel is also betting that AI workloads become more prevalent in the consumer space, evidenced by the architecture pulling in the Deep Learning Boost technology found on the latest server processors.

The company will also be releasing PCIe 4.0-compliant 500 Series chipsets that extract the most performance from these processors, but being LGA 1200, or the same as Comet Lake, most users who invested in 400 Series boards can install an 11th Gen chip just fine with a BIOS update, though they will enjoy only half the PCH-to-CPU motherboard bandwidth - x4 vs. x8 - as the new, improved 500 Series.

It's handy that Intel is adding an extra four PCIe 4.0 lanes over previous processor generations, ostensibly for a high-speed, CPU-attached NVMe SSD.

Putting some meat on the sparse bones, the fastest of the 11th Gen bunch is the Core i9-11900K. It houses that full complement of eight cores and 16 threads able to run up to 5.3GHz depending upon load. Intel finally ratchets up the memory frequency, now officially DDR4-3200.

The always-on Quick Sync Video is a new feature this time around. Historically, using a discrete graphics card has disabled the integrated graphics' Quick Sync capability, which is handy for energy-efficient streaming/encoding/decoding. Now, however, an enthusiast can leverage Quick Sync whilst also having a gaming card in situ - the best of both worlds. 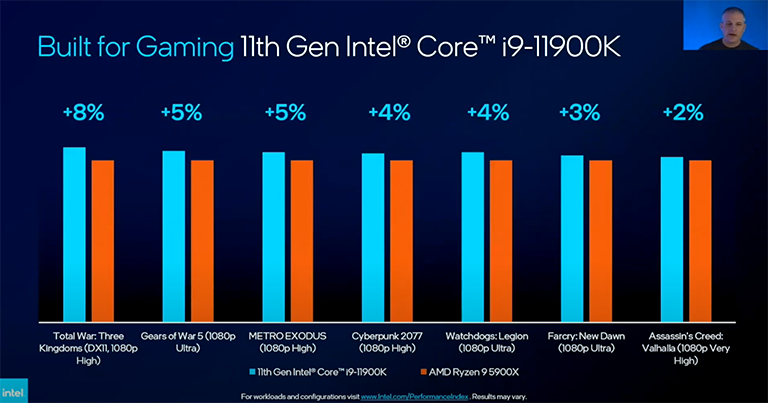 Coming by March this year, Intel is bullish that it reclaims the desktop gaming CPU crown from AMD. We'll be doing our own tests in due course, but following on from this announcement, is 11th Gen Core (Rocket Lake) more worthwhile than Ryzen 5000 Series? Let us know your thoughts in the forums.

Posted by =assassin= - Mon 11 Jan 2021 22:42
I noticed it said “up to” DDR 4 3200 - so that likely means the lower models and possibly non-k ones are artificially crippled again when paired with cheaper motherboards. I assume they may at least be 2933 though instead of 2666, except for the 4 core parts, which may still be stuck with the slower RAM.
Posted by maxopus - Mon 11 Jan 2021 23:10
So its a whole 5% faster than Ryzen 5900X?
I guess that explains this https://hexus.net/tech/news/cpu/147249-intel-rocket-lake-flagship-cpu-overclocked-69ghz-ln2/ :D
Posted by Tabbykatze - Mon 11 Jan 2021 23:20
The CES 2021 video from Intel was an absolute garbage patch of “Real World”, salacious comments about their competition and spinning a narrative around their products (making a problem so they can fix a problem).

Which includes a canned attack against an AMD laptop, you what? They just brazingly made out AMD simply cannot protect you against any attack even though this was a single attack vector against a specific element of CPUs. I wonder how many they went through before selecting on one they specifically protect against. This “demo” was grossly disingenuous at best, I would love to see the actual configuration of both systems and the specific virus they deployed and method use.

This was as much a “Intel product” launch as it was an “anti-AMD marketing piece”. It's one thing to market your product and use benchmarks against your competition but it's another to just salacious put out your competitor. Sadly, nothing they did there could be easily taken against them.

Take Nvidia, they don't need to put out the competition with salacious marketing because they have absolute confidence in their product. AMD needs to highlight their products increase of performance against their own previous gen and how they've gotten close/overcome the competition but are practical.

Intels marketing is “well our competitors are poodoo, you should stay with us”.

If that's the best game they could find a win in, then I don't hold much hope at all for the rest of the lineup.

I also liked the Canno…Alder Lake show and tell which amounted to “hey look everyone, we do have something else coming, it's actually real and not just a pipe dream fantasy!”

Mini tired rant over.
Posted by Tunnah - Tue 12 Jan 2021 01:37
Who the hell buys a high end desktop CPU for the onboard graphics. It's such a weird segment to care about.

And don't get me wrong I'm not narcissistic enough to think I've thought of something that Intel hasn't, I just find it really bloody weird
Posted by lumireleon - Tue 12 Jan 2021 05:44
OOOPS! where are the energy efficiency numbers?