As reported previously the upcoming AMD Ryzen 5000U series mobility APUs are going to be a mix of Cezanne and Lucienne parts – which is confusing and far from ideal. The former (CZN) parts employ the newest Zen 3 CPU cores, but the latter (LCN) will be Zen 2 based. The move to the Ryzen 5000 series won't therefore be as 'unifying' at it was expected to be. However, both CZN and LCN APUs are expected to use the same Radeon Vega graphics cores.

A few hours ago a new Geekbench 5 submission popped up to tease the performance advantage of the CZN APUs. According to this Geekbench entry, via NotebookCheck, the processor under test here was the upcoming AMD Ryzen 7 5800U APU which features:

It scored, as you can see from the screenshot, 1,421 in single thread CPU tests and 6,450 in the multi-thread test suite. Now, let us consider an interesting comparison – the similarly named AMD Ryzen 7 5700U, which is an LCN part with Zen 2 cores. The key specs look the same as the Ryzen 7 5800U but with a little slower base/boost clock on the CPU cores (1.8GHz/4.3GHz). In Geekbench the AMD Ryzen 7 5700U is almost 20 per cent slower in single thread CPU tests, however, there is much less difference in multi-thread tests with it being just 2.6 per cent behind the CZN APU. This 1T/nT score divergence is expected with what we know of the major differences between Zen 2 and Zen 3. 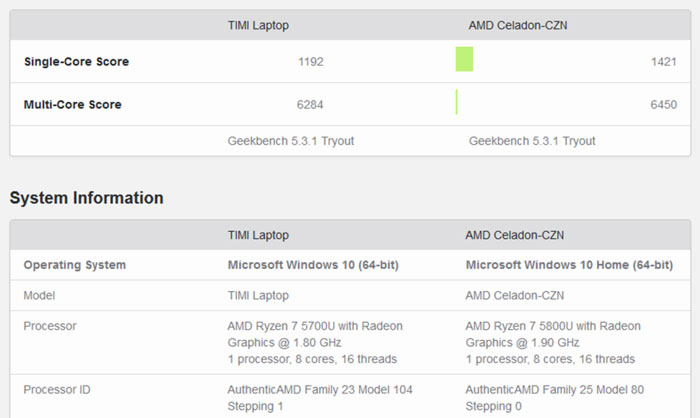 AMD's Ryzen 5000U APUs are expected to be released in early 2021. There is potential for the mobility line to become even more complicated with the introduction of the more powerful Ryzen 5000H family – we don't have any indicators regarding the configuration of these APUs as yet.