Overclocking expert der8auer examined an Intel Core i7-8700K under a scanning electron microscope (SEM) a couple of years ago when that processor was one of Intel's best consumer offerings. This was an interesting exercise but in a recent YouTube video series der8auer has been leading up to a direct comparison between the current state-of-the-art Intel Core i9-10900K and the AMD Ryzen 9 3950X. The former is an Intel 14nm+++ production chip and the latter made for AMD by TSMC on its 7nm process. You probably expect the actual transistor size revealed by the SEM to be rather different…

In order to get the Tescan labs SEM to make an effective comparison der8auer chose to slice into these halo consumer champs through their L1 cache sections. You can see much more about the background to this process, the SEM technology and der8auer's thinking in the previous two videos in this series; Visiting Tescan Part 1, and Part 2. 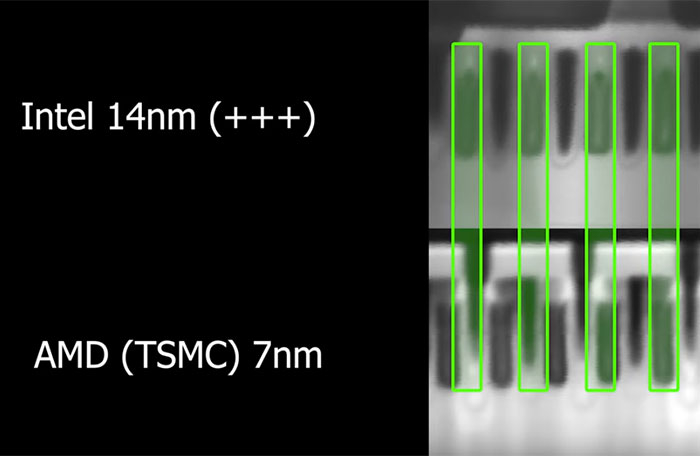 Having looked at the above comparison, and highlighted it in his video, der8auer challenges the obvious conclusion that Intel 14nm+++ and TSMC 7nm are very similar in physical scale, reminding viewers that the above pictures don't fully represent the 3D structure that is so important to modern chip optimisation. Moreover, the relationship between node size, half-pitch, and gate length has significantly loosened since the early 1990s. The XXnm figure reflects process history more than progress, asserts the OC expert, and thus it isn't very useful as a metric to compare between chip makers.

Another metric, probably worth closer consideration is transistor density, as revealed by the chip fabricators. Intel 10 nm and TSMC 7nm processes both produce dies with approx 90 million transistors per sq millimetre. Moving forward both Intel and TSMC are targeting approx 150MT/mm² for their upcoming 7nm and 5nm processes, respectively. Again though, other factors make differences, like transistor type and chip architecture, that make direct comparisons difficult. In conclusion, chip process advances sometimes make interesting news segments but user experiences assessed earliest in third party reviews are most essential as I am sure HEXUS readers know.

Posted by Kanoe - Tue 22 Sep 2020 13:36
It was a very interesting mini series of videos. The equipment they use is as facinating as the findings.

I love the fact the conculsion was that process node numbers are complete b******s and cant be used for comparing one manufactues process versus another.
Posted by DanceswithUnix - Tue 22 Sep 2020 13:52

Kanoe
I love the fact the conculsion was that process node numbers are complete b******s and cant be used for comparing one manufactues process versus another.

Kanoe
I love the fact the conculsion was that process node numbers are complete b******s and cant be used for comparing one manufactues process versus another.

*shock*, You'll be saying TDP numbers can't be compared next, or even GHz numbers ;)

I guess he didn't meant that, only that different manufactures node sizes are incomparable between manufacturers. its comparing apples to pears.
TDP is also funny in recent years, this is why Intel decided to use another metric for chip power usage, as no one trusted the TDP anymore.
Posted by Corky34 - Tue 22 Sep 2020 16:55
Mind blown, something's wrong with me that the technology of looking at things that small gets my juices fizzing.
Posted by edmundhonda - Tue 22 Sep 2020 17:57

HEXUS
Another metric, probably worth closer consideration is transistor density, as revealed by the chip fabricators. Intel 10 nm and TSMC 7nm processes both produce dies with approx 90 million transistors per sq millimetre.

The 10nm+ Sunny Cove core in Lakefield is ~50mT/mm2. Haven't seen any other actual calculated numbers for 10nm.