About a week ago HEXUS reported on early retail listings of an unannounced high-end desktop processor from Intel. The Intel Core i9-10850K (10C/20T) wasn't listed in the Ark at that time, but it had popped up for pre-order in various retailers in Europe. Now the processor has become official and is listed in the Intel Ark, and major UK tech retailers like Scan have published pre-order pages, ready for availability (14th August). 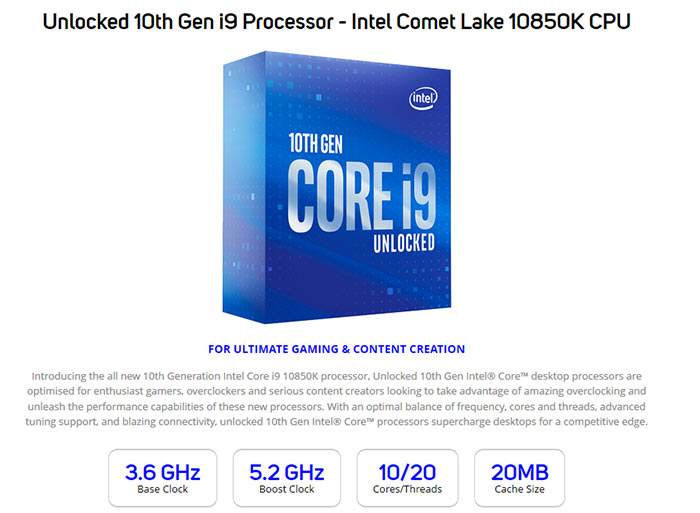 As the Intel Core i9 -10850K first raised its head above the parapet, the obvious comparison was with the popular Core i9-10900K, as it offered a very similar configuration. In fact the similarities are even greater than we thought a week ago. If you look at the official Intel Ark comparison page you can see both these 14nm processors boast 10C/20T, 20MB Smart Cache, and a 125W TDP. Clock speeds at base/turbo/boost are just 100MHz apart in the 10900K's favour. Please nose through the comparison chart below. 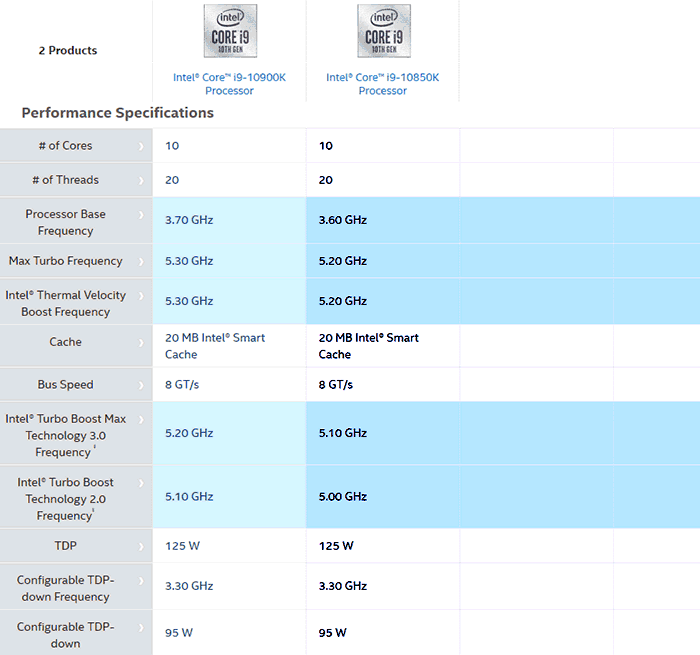 According to various US news sites the 100MHz difference will cost/save PC DIYers and enthusiasts about $35. Here in the UK at Scan, we observe an even greater difference. At the time of writing the UK tech retailer has listed an Intel Core i9 -10900K for £549, and the Intel Core i9 -10850K at £479, that's a gaping £70 difference (15 per cent) for the expected tiny performance differential.

PCWorld got a quote from Intel about why it has added the Core i9 -10850K to its lineup. "The i9-10850K is based on immediate feedback we've received from customers, including to further expand options and different price points," the company said. "This will also obviously support long term demand for i9K processors as well." Of course it might be a good way for Intel to use up chips that didn't make the grade to become fully-fledged Core i9-10900K parts.

If the above interests you then it might be a good idea to read through the HEXUS review of the Intel Core i9-10900K, published in May 2020.

Posted by Irien - Tue 28 Jul 2020 12:45
A cynic might think they had a lot of silicon that didn't make the grade…
Still, 70ukp buys a fair bit of cooler, so it's probably a reasonable tradeoff.

That being said, if you're not fussed about the extra 100 Mhz, why are you buying Intel at this point anyway? Surely that clock speed is the big draw of their current range?

(thinks) Nevermind, I just answered my own question. I want to love AMD and their CPUs are superb right now, but Intel's platform and RAM compatibility is so solid.

(background) - 2 AMD CPUs bought for customers in last few weeks, and 4 sets of 3200 RAM from different big name manufacturers. None worked (memory errors) at stock 3200 XMP speeds, including “made for AMD” ones. Both worked eventually with a few tweaks to clocks, but I wonder what others have found (esp consumers!). Latest BIOS/AGESA used at each time.
Posted by alpha channel - Tue 28 Jul 2020 13:18
Can't say I've had any issues with my new system (3900x/MSI Unify), possibly more of an issue with motherboards at the cheaper end perhaps? (though why that should be the case who knows?) I didn't even think about it, just bought 64GB of 3200MHz Corsair ram and, XMP enabled, away it went (I did get a half decent deal on the kits though at £108 each).

That's because you're technically running the ram outside of the supported range, anything above 2667 is deemed as overclocked, so will likely need other system tweaks to get it working at faster speeds…

You can't go blaming AMD/Memory makers if you want to run stuff outside of supported specs….

One thing I noticed was that sometimes the problems would only show under very heavy load (despite low temps). I tested the systems for customers for multi-hour crunches for stability, and the 3900x would only fail (reboot) every 2-3 hr or so. Made for a *very* time consuming job but useful experience with these newer CPUs. However, the CPUs have to be able to run like that, otherwise customer will not be very happy in the middle of a 10+ hour raid!

Also, in response to other post I think TR2950x is Zen+ which should be rated for up to 2933Mhz RAM I think, based on what I've read.