HEXUS reported upon the launch of the first Ryzen (Pro) 4000 G Series desktop APUs on Tuesday. This was basically a paper launch for our purposes as AMD didn't send out any APUs for review, preferring to supply them to big OEMs before subsequent shipments may eventually become available for enthusiasts and DIYers. However, yesterday we spotted PC DIY shops in Thailand were already breaking open bulk packed AMD Ryzen 4000 Pro G Series processors for all comers. The use of an existing or the purchase of a new cooler would be necessary, to pair with this OEM stock.

While established PC and components review sites like HEXUS hasn't got test samples, those desperate for third party independent reviews can get a taste of data from the likes of Taiwan's CoolPC. From the photos in the article it looks like retailers in Taiwan might also be breaking up OEM bulk packs for eager enthusiasts to dabble with. 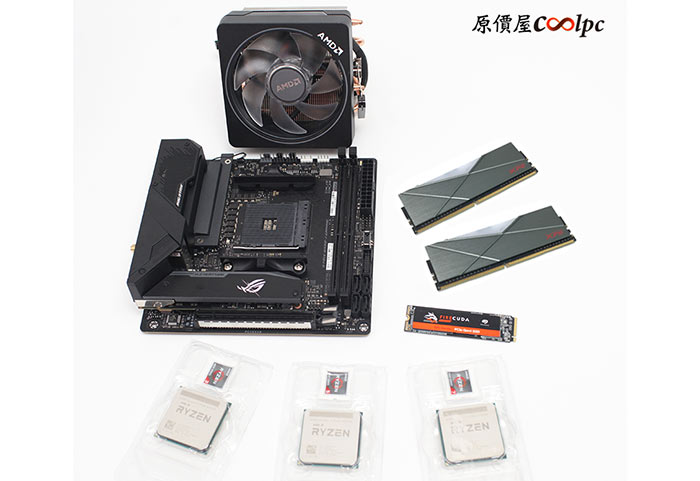 MasterFB of the CoolPC site says that he chose to cool the AMD Ryzen Pro 4750G, 4650G, and 4350G chips tested with an AMD Wraith Prism, while eventual consumer shipments will probably bundle the Wraith Stealth. An open-air Asus ROG ITX platform was used for the tests, with 16GB of DDR4-3600 memory (dual channel) from XPG, and a Seagate FireCuda NVMe SSD.

A mix of application and gaming benchmarks were used to compare the latest AMD APUs against previous gen APUs, current and last gen Ryzen CPUs, as well as various current gen Intel competitors. If you go to the source link you can see charts for; CPUMark 99, Cinebench R15/R20, 7zip, x256 video (de)compression, 3DMark Fire Strike and Time Spy, Assassin's Creed Odyssey (using 1080p low settings), Rainbow Six: Siege, and League of Legends. I've embedded a few of the charts below.

Sifting through the data you can see that the 8C/16T AMD Ryzen Pro 4750G competes closely with the R7 3700X, as well as Intel Core i7-10700K processors, depending upon the tests. The built-in graphics of this chip (8 Vega CUs) look to deliver performance on a par with a discrete Radeon RX 550, noticeably better than a GT1030 2GDS, and 3x faster than the Intel Core i7-10700K can muster.

Will these have the standard Vega fixed function units? Or is it a cut down version due to silicon space issues?
Posted by Kato-2 - Fri 24 Jul 2020 09:59

Jowsey
What's the situation with video hardware decoding for these APU's?

Will these have the standard Vega fixed function units? Or is it a cut down version due to silicon space issues?

Most likely yes as part of the PR push they are touting Adobe Premiere Pro's support for AMD's hardware video encoding.

https://www.pcworld.com/article/3567749/amd-demos-how-fast-ryzen-4000-laptops-are-in-adobe-premiere-pro.html
Posted by persimmon - Fri 24 Jul 2020 10:01
These will have improved Vegas FF units . Seem to be no shortage in thailand, 36 boxes @ 300 per box ? estimate
Posted by tygrus - Thu 30 Jul 2020 08:49
Just imagine if they could have added 50% more CU/shaders, more onchip cache (or eDRAM) and double the TDP!
But the OEM's didn't care because it's for basic SFF office desktops.
More GPU would need more RAM bandwidth so in the meantime they are limited.
They are leaving room for improvement for next year.