Intel has launched updated vPro processors for business laptops and desktops. The new line of 10th gen Intel Core vPro processors are based upon the Comet Lake architecture with baked-in SMB and enterprise security features added. For the desktop Intel has Core i5, i7, i9 and Xeon LGA1200 processors. Moving on to mobile there are similarly subdivided H-series parts, as well as Core i5 and i7 U-series processors.

A key property of the vPro series is, as always, the security features - as talked about in the above video, and highlighted in the slide below. 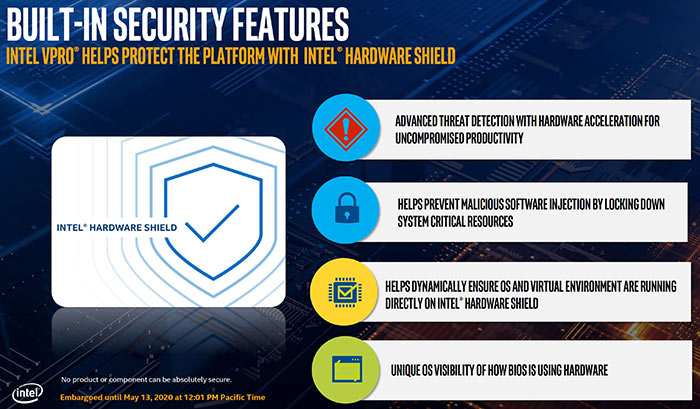 So, what does the new vPro lineup offer, other than the above important security and manageability enhancements? Conveniently Intel's vPro lineup mirrors its latest consumer/workstation lineup so, for example, if you know what to expect when you buy a Core i9-10900K, there is a vPro version of that CPU available. Check out the table below for the full desktop lineup that has been announced. 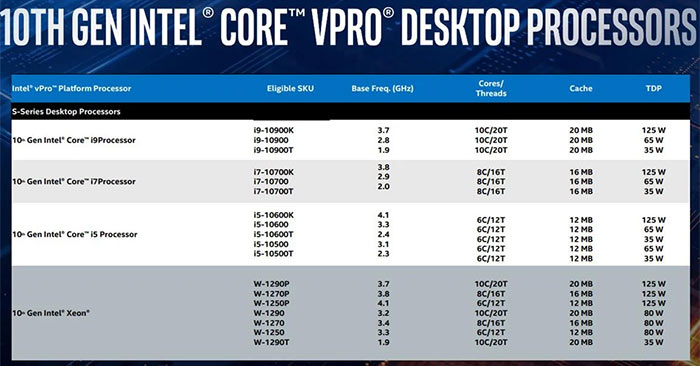 In the table above you will see that Intel has introduced seven new 10th gen Xeon processors with vPro technology. It has also introduced the Xeon W-1200E series of processors for IoT. These IoT-targeted chips have lower TDPs as preferred by designers of embedded devices. 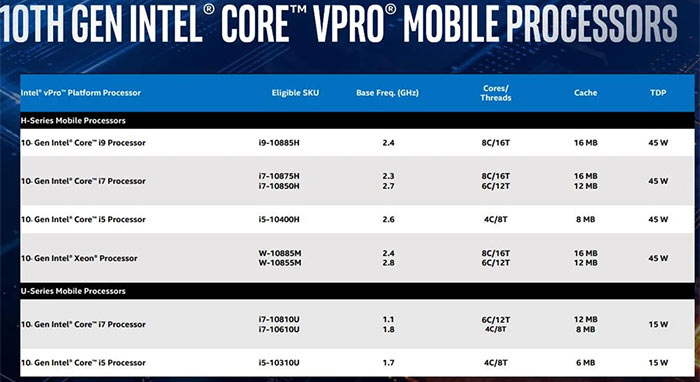 Mobile offerings are split between H-series 45W parts (including two Xeon options) and U-series 15W parts. All with the vPro treatment.

Performance uplifts are discussed by Intel, but rather than direct intergenerational and competitor comparisons it prefers to highlight advances made over the last few years. I've reproduced the official improvements bullet points below:

Last but not least an important change in this generation of vPro processors is the integrated Wi-Fi 6 (Gig+) connectivity, claimed to be able to deliver up to 3x faster download speeds and improved performance for common business tasks like video conferencing. Of course your home / workplace will need appropriate supporting wireless hardware to make the most of Wi-Fi 6.

ohmaheid
It's pretty desperate when you have to compare your latest and greatest against 3yr old and 5yr old stuff. …

The vPro processors this is announcing are specifically aimed at enterprise, where three- and five-year hardware refresh cycles are fairly common. So they're actually comparing them to the processors that large enterprises will be considering replacing. There'd be no point comparing performance to last year's processors, because businesses simply don't upgrade infrastructure that often.

scaryjim
The vPro processors this is announcing are specifically aimed at enterprise, where three- and five-year hardware refresh cycles are fairly common. So they're actually comparing them to the processors that large enterprises will be considering replacing. There'd be no point comparing performance to last year's processors, because businesses simply don't upgrade infrastructure that often.

I'm sure it has nothing to do with the fact that Intel's processor stack has largely stagnated over the last three years… ;)

if we're going back 5 years, is the comparison before or after side channel attack patches or not? And do the new ones need similar patches?