As you will have seen earlier, AMD launched a trio of new EPYC 7Fx2 processors, and HEXUS reviewed the 16C/32T AMD EPYC 7F52, which sits between the EPYC 7F32 with 8C/16T, and EPYC 7F72 with 24C/48T. You can read the editor's thorough analysis of the F-series via that link, but there are some more important ecosystem and commercial news from AMD today, as the industry warmly welcomes these processors and both existing OEMs and new partners adopt the new AMD EPYC 7Fx2 processors. 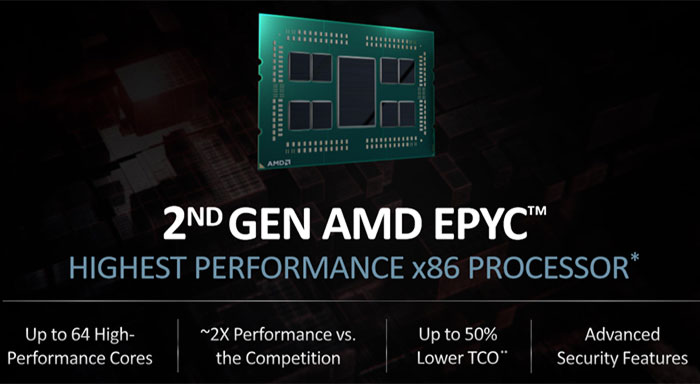 AMD's latest EPYC processors don't just appeal to server makers and their customers due to raw performance considerations. Though this is a key metric to evaluate them (performance on database, commercial high-performance computing (HPC) and hyperconverged infrastructure (HCI) workloads) businesses require an appealing package of features that optimizes performance alongside other platform features like security and TCO – with solid enterprise app compatibility and reliability a given.

In its attempt to distill the appeal of the new EPYC processors, AMD touts the three pillars of its balanced architecture. Its high performance Zen 2 cores with 7nm process are claimed to deliver more performance with less power, its CPU architecture uses a larger L3 cache and is supported by Infinity Architecture for linear scaling, and lastly industry leading system design helps eliminate bottlenecks with its 8 channel DDR4 RAM and up to 128 lanes of PCIe 4.0 connectivity.

Above you can see (click to zoom) AMD's slide that highlights its balanced offerings. In the small table at the foot of this slide you can see some direct comparisons with rival Intel processors priced in the same region.

A big part of the appeal of the new processors to business and enterprise is the reduction in TCO. AMD claims that its new 2nd Gen EPYC parts are not just the highest performance x86 processors you can get for servers but they also offer up to 50 per cent lower TCO. The best case example for this superlative saving is in virtualization tasks. A particular related claim is that the new EPYC chips deliver up to a 47 per cent higher VMmark 3.1 score compared to the competition.

Thanks to the above highlighted performance and TCO advantages AMD has gained support from both existing partners and new ones. Dell EMC, HPE, Lenovo, Nutanix, Supermicro and other OEMs are name-checked and provide testimonials for the new processors and platforms. In all there are more than 80 new platforms being readied featuring the AMD EPYC 7Fx2 processors. 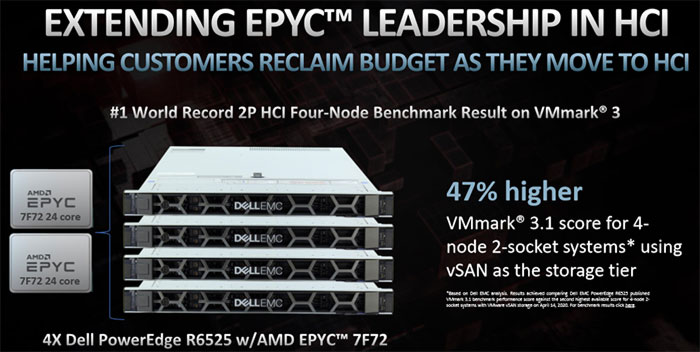 Since we highlighted the great performance in virtualization tasks, let us look closer at what VMware has to say about the new processors. "The 2nd Gen AMD EPYC 7Fx2 processors bring new value to VMware customers. They provide a unique balance of strong per core performance coupled with an industry-leading per-processor memory capacity of 4TB," said VMware CTO Richard A. Brunner in charge of Server Platform Technologies. "A key element of VMware vSphere, vSAN, and now VMware Cloud Foundation market success has been our commitment to helping customers quickly adopt the latest hardware innovation."

Other accolades come from the likes of Microsoft which is particularly happy with the "up to 17 per cent higher SQL Server TPM per core performance." Meanwhile, Dell EMC noted that AMD's new trio of EPYC processors will find a home in its record breaking PowerEdge servers. Another major feather in AMD's cap is that IBM Cloud has just launched a new bare metal server offering based on EPYC 7Fx2 (as well as the the AMD EPYC 7642 processor).

You can read more about AMD EPYC 7Fx2 processors and their use in HCI, database management systems, and HPC workloads on the AMD blog.