A slide, purportedly from an upcoming official Intel presentation, has been leaked. The graphic trumpets a trio of key qualities of the yet to be announced 'Unlocked 10th Gen Intel Core i9-10980HK processor'. In brief, this is a laptop CPU for gamers and content creators that will sport 8C/16T and run at up to 5.3GHz with Thermal Velocity Boost (TVB) technology.

The new Intel Core i9-10980KH will be the flagship of the mobile CPU line to be launched shortly. Last week we saw evidence of a lower echelon processor from the same family - spotted in an Asus laptop which had been tested in 3DMark. In this Asus laptop a 14nm Intel Core i9-10880H with 8C/16T ran at a base/boost of 2.3/5.0GHz.

TVB was first introduced with the Intel Core i9-8950HK, Intel's first i9 for laptops, as well as the Intel Xeon E-2186M. This technology boosts the chip beyond normal maximum turbo speeds opportunistically - "whenever processor temperature and turbo budget allows," says Intel. 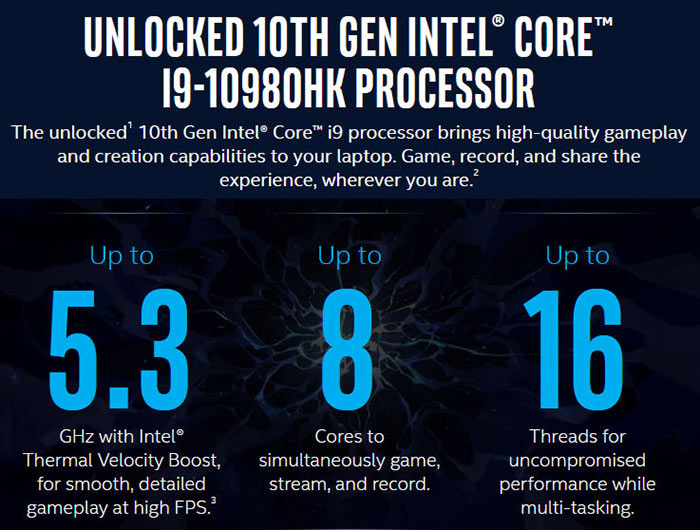 As a flagship part, the Intel Core i9-10980KH will appear in top of the line laptops for gamers and content creators. The pricey tech confections it will appear in will likely cost a pretty penny but will enable users to "game, record, and share the experience," while mobile.

VideoCardz reiterates that the expected launch date of these processors will be Thursday, 2nd April. In our previous article about the Core i9-10880H, we saw a promo image from a Chinese laptop OEM naming this date for the release of 10th gen mobile H processors from Intel, as well as the onset of availability of Nvidia RTX Super mobile GPUs.

And here was me thinking that GPU was more important there, when was the last time we saw a modern CPU being the bottleneck?
Posted by Terbinator - Mon 30 Mar 2020 10:46

And here was me thinking that GPU was more important there, when was the last time we saw a modern CPU being the bottleneck?