Purported single and multi-threaded Cinebench R20 scores for an unreleased Intel Core processor have been shared on a South Korean tech community forum. The processor caught in the spotlight is the Intel Core i7-10700F, which is estimated to be coming to the desktop market in March/April. It will be one of several new Comet Lake 10th Gen Intel Core-S series processors destined for shiny new LGA1200 motherboard sockets.

It looks like the Intel Core i7-10700F will be an 8C/16T part and the sample spotted came with a 2.9GHz base clock. Turbo clock should be somewhere in the 4.7/4.8GHz region. Considering these specs (core counts and turbo speeds) it might not surprise readers that its performance isn't very different from the previous gen Core i9-9900K. 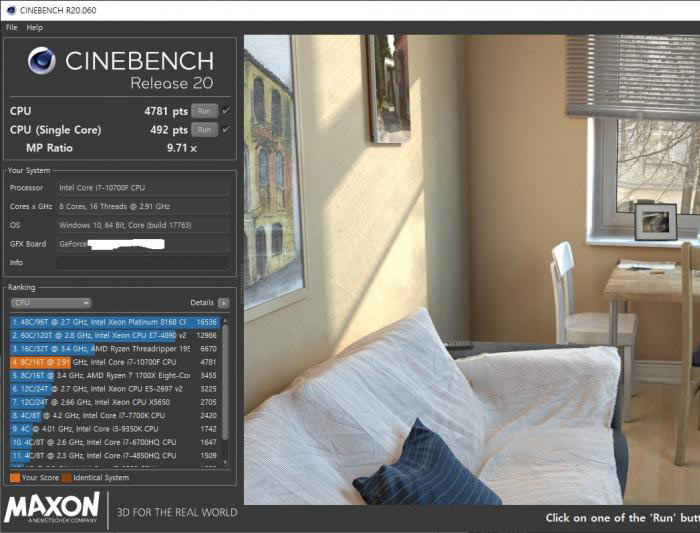 The Intel Core i7-10700F was apparently tested by a Korean language Quasar Zone user, and it turned in the following Cinebench R20 CPU scores: 4781 on the multi-core test and 492 on the single core test. Looking around for comparisons using this specific benchmark and test there is of course variance but in general the unreleased Core i7-10700F sits snugly with the Ryzen 7 3700X and the Core i9-9900K. The same is true for the single core scores.

So, Comet Lake-S isn't bringing anything very significant to the desktop as yet another Skylake refresh. Thanks to pressure from AMD Intel seems to be upping core counts and value across the range, but any value for upgraders is questionable with the new motherboards required.

Informatica Cero has released a new slide from the 10th Gen Core-S presentation it first shared some information from as 2019 came to a close. Last time the slide charted the standard parts which include iGPUs. This time it has shared the new F-Series which make use of parts that don't have a functioning iGPU. I spotted this Informatica Cero sourced news at VideoCardz.

Posted by ohmaheid - Thu 20 Feb 2020 11:28
I know it's a bit premature…But the pricing of these processors will have to be quite low, as the need for a new motherboard and beefy cooling solution will have to be factored in, given the reported high power requirements of the new 10th gen.
Posted by LSG501 - Thu 20 Feb 2020 15:29
Funny how it's benched against old gen 1 AMD cpu's….

While there is a side of me wanting Intel to bring out a ‘closer’ performing option so it brings down prices overall I'm at the same time enjoying Intel struggling due to their complacency.

cinebench always does that, it's only got a few results set to display. It *could* be sold for the same price as a 3700X and would be a good deal, we don't know yet - it's unlikely to be, but then it was unlikely for intel to half the price on their workstation chips