Simply going by the nomenclature, the Intel Core i9-10900X looks set to be the direct successor to the existing Core i9-9900X - and this Cascade Lake-X part is a Skylake-X refresh. You can see in the screen-grab that the 10C/20T Intel Core i9-10900X can be installed on the same X299 motherboards. 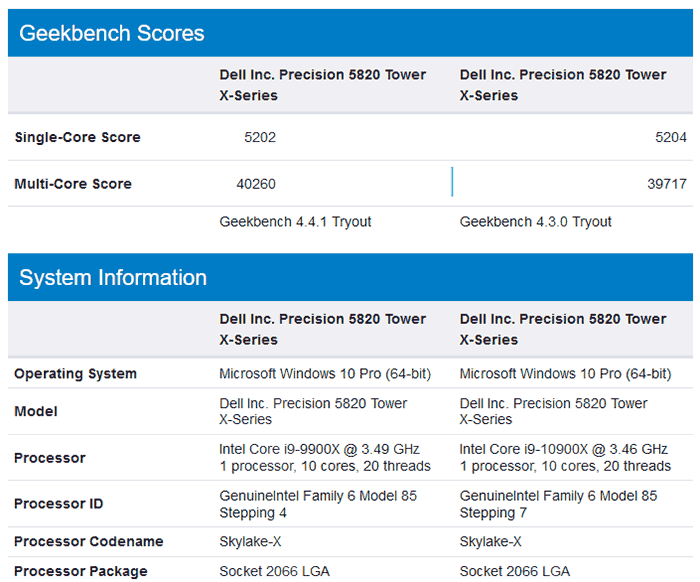 Delving into the purported numbers further, the new Intel Core i9-10900X is said to run at a base/boost of 3.5 / 4.4GHz, the same as its predecessor. However, other reports have signalled that the Core i9-10900X will be given a base clock lift of 200MHz or more, so it should show 3.7GHz+.

As it stands, a Geekbench comparison (10900X vs 9900X) of the same/similar Dell Precision 5820 Tower X-Series system, with processor switched, shows very little gain from the new processor installed. Single core performance is identical and multi-core score is just a single percentage point different in this example. 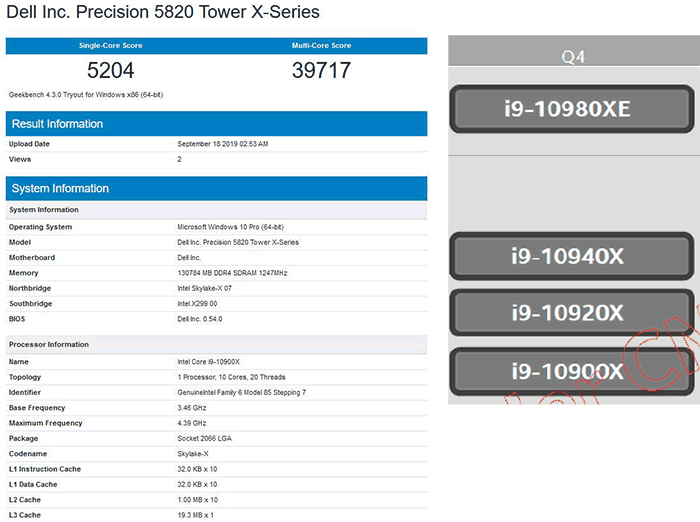 A chart showing the purported Cascade Lake-X lineup (above, right) puts the Intel Core i9-10900X right at the bottom of the stack, so it will very likely be the 10th Gen Core HEDT CPU released. Intel previously announced that Cascade Lake-X processors will start to become available this month.

Also, based on an aging 14nm process still using old micro architecture from 2015 with higher base clocks by the sounds of it. Not really a step up from where I see it. Intel need to up their game like AMD did and stop selling old tech at latest prices.
Posted by Tabbykatze - Thu 19 Sep 2019 11:43
*yawn*

Wake me up when September ends or Intel does something interesting, whichever comes sooner!