The creation of practical working BCIs, or brain computer interfaces, is a technology goal with strong roots in sci-fi literature and drama. HEXUS has written about such technology before; back in 2008 with the Neuroheadset for gamers, and a little more recently in 2012 with the unveiling of an experimental mind-controlled robot. Now China-based researchers have taken the concept further with what is claimed to be "the World's First Brain-Computer Codec Chip," the BC3.

China Electronics Corp and Tianjin University (located near Beijing, China) worked together on the BC3 and assert it is a fully independent intellectual property. The purpose of the chip, and its design brief, is to improve Brain-Computer Interface (BCI) technology. Devices powered by the BC3 will thus be able to process electrical signals from a human brain and decode user-intent. It does so without the use of the human body's natural neuromuscular pathways. 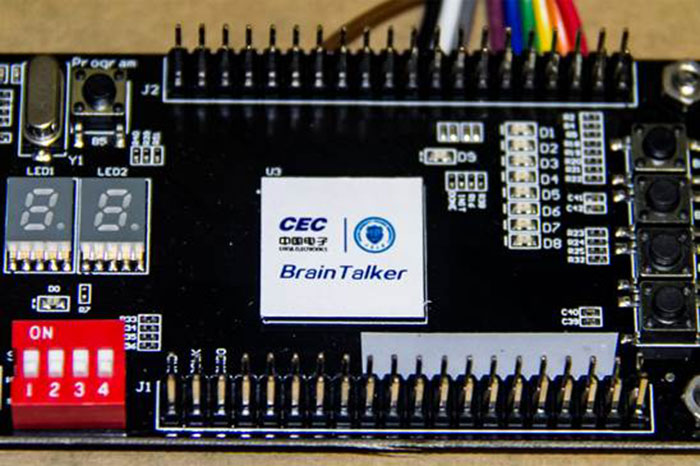 "The signals transmitted and processed by the brain are submerged in the background noise. This BC3 chip has the ability to discriminate minor neural electrical signals and decode their information efficiently, which can greatly enhance the speed and accuracy of brain-computer interfaces," explained Dong Ming, Dean of the Tianjin University Academy of Medical Engineering and Translational Medicine.

The practical use cases for a dedicated accurate brain reading chip could be rather wide ranging. The Tianjin University blog reckons the BC3 will be used in portable devices, and even wearables. Some obvious uses would be in devices and gadgets that are designed for those with limited mobility, in medical devices, as well as in games and entertainment devices.

Tabbykatze
Colour me interested, after having Kevin Warwick as a lecturer, this stuff is highly interesting!

Pleiades
Has he gone full Borg yet? :shocked2:

Last time i spoke to him he had left Reading University to pursue his orojects at another uni.

They were still umming and arring about the much larger sensor platform being pneumatically rammed into his lower cerebral cortex (iirc). The problems around it were, a mm or so one way the sensor will have bad connections, a mm or so the other way he dies or at best is a quadriplegic with severely reduce cranial function.

So yeah, not quite there yet, damn the frail human body!
Posted by philehidiot - Sat 08 Jun 2019 12:46
That reminds me, I really need to charge. I'm supposed to do it every night and I've missed two so far. According to my remote control I still have ~75% battery left so that's always helpful. Yes, I have a remote control. For myself.