Intel held an investor day at its HQ in Santa Clara yesterday. Keynotes were presented by Intel CEO Bob Swan and business unit leaders. Probably the most interesting presentation of the day came from Dr. Murthy Renduchintala, Intel's chief engineering officer and group president of the Technology, Systems Architecture and Client Group. Renduchintala shared some slides that showed Intel's intent to ship 10nm Ice Lake client processors this June and another key slide showed the roadmap for transitioning from 10nm to 7nm. It looks like 10nm, after all the pratfalls and efforts getting there (resulting in five generations of 14nm Core processors), will be a short lived process for Intel. 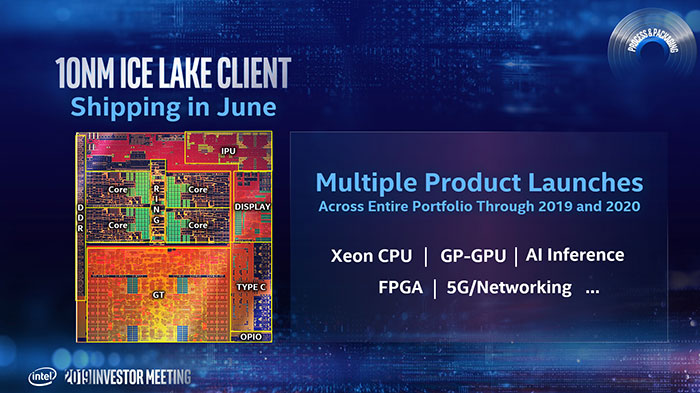 Renduchintala reminded investor day attendees that, while process leadership is fundamentally important, Intel sees the bigger picture and has strode forward with advancing "architecture, memory, interconnect, security and software". He went on to assert that thanks to these broad and heavy investments, Intel is the only firm which can properly address the demands of the expanding data-centric market. 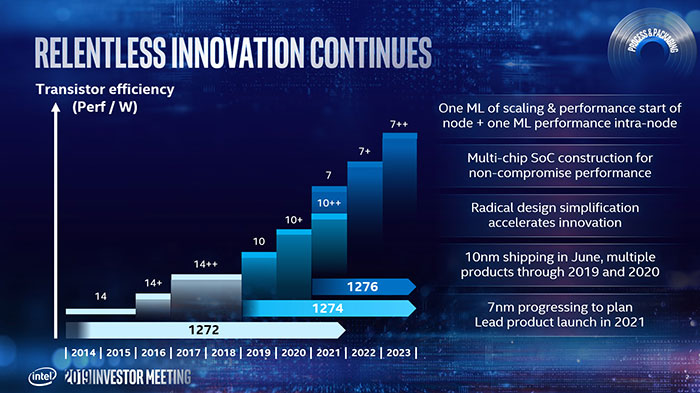 It won't be until the 2019 holiday season that we see Ice Lake-based devices from Intel OEM partners will be on shelves. Intel 10nm will become mainstream in 2020 with additional CPUs for client and server, Ai processors, SoCs and GPU components all shifting to the process. Also next year we will see the first 10nm+ products. 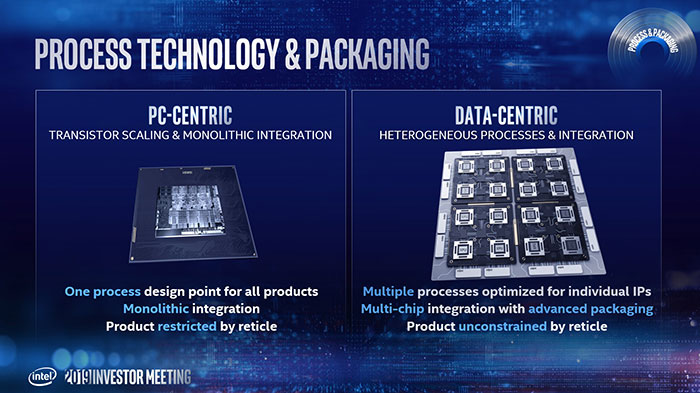 As we move into 2021 we have already got to the crossover where Intel hopes that it will both intro the first 10nm++ products and the first 7nm products to its range offerings. Intel says that 7nm is progressing to plan with a "lead product launch in 2021". 7nm will be Intel's first commercial use of EUV technology and it will continue to drive forward this tech for future processor generations.

On the topic of Intel’s 7nm process technology, Renduchintala said that it will "deliver 2 times scaling and is expected to provide approximately 20 per cent increase in performance per watt with a 4 times reduction in design rule complexity". The lead product for 7nm is expected to be an Intel Xe architecture-based, general-purpose GPU for data centre AI and high-performance computing. The first discrete Intel GPU will come in 2020, so it must be a 10nm part. 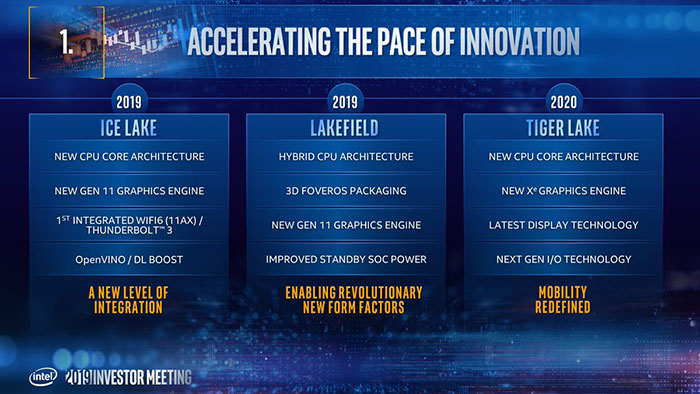 Another important technology for Intel going forward will be the use of heterogeneous integration. Renduchintala previewed new chip designs that leverage advanced 2D and 3D packaging technology to integrate multiple intellectual property (IP), each on its own optimized process technology, into a single package. On the client side this advancement will be first evidenced with the introduction of Lakefield is projected to deliver approximately 10 times SoC standby power improvement and 1.5 to 2 times active SoC power improvement relative to 14nm predecessors, asserted Renduchintala. Furthermore, we can expect to see 2 times graphics performance increases, and 2 times reduction in printed-circuit-board (PCB) area, which will enable OEMs to push the boat out further with thin and light form factor designs.

Surely this is going to be a result of moving to newer wifi spec? Yet it's first on the list above video transcode and GPU speeds?
Posted by mercyground - Thu 09 May 2019 13:08
So what they admitted is basically its going to be 2021 before they fix this horrendous mess that is 10mn?

I said it, i freakin said they would do the ol one two and switch out the nodes.