Texas company IceGiant is applying its data centre cooling 'thermosiphon effect' nouse to PC processors. The result is one of the most extreme CPU coolers ever seen. IceGiant's ProSiphon Elite is startling in its appearance, size, and weight – and it costs a pretty penny at US$170 / €185.

Probably the key feature of the ProSiphon Elite is its gravity-driven two-phase cooling meaning no pump is required to circulate the dielectric fluid within. Put in simple terms the fluid will evaporate and vapour rise to the upper parts of the chamber; cool air flowing through the aluminium condenser block liquefies this to fluid; then gravity means the cooled fluid returns to the CPU contact plate area. Despite this description and the mention of gravity, you can use the ProSiphon Elite in either horizontal or vertical orientation, according to IceGiant. 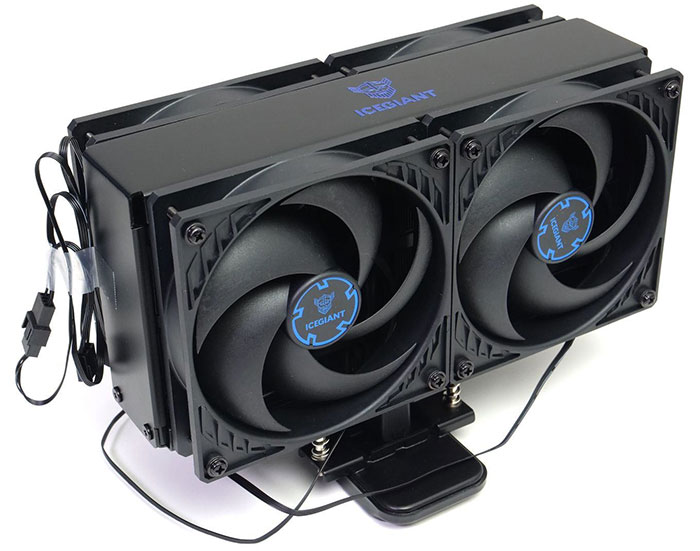 Beyond that interesting thermo-tech, the bulkiness of this cooler requires comment. It can be set up with two or four 120mm fans and measures 251 x 164 x 104mm and 251 x 164 x 129.4mm, respectively, in those configurations. Those are big maximum compatibility figures to deal with… Additionally, you are looking at a cooler that weighs 1,440g or 2,000g, in twin or quad fan configurations, respectively.

IceGiant primarily intends for the ProSiphon Elite to be used with HEDT systems with large CPU contact areas, like AMD Threadripper systems, for example. However, this isn't a hard requirement as it can indeed be fitted to a whole host of processors using the following sockets:

Why would you use this ProSiphon Elite rather than a similarly priced, or cheaper, AiO CPU cooler? IceGiant points out that its product benefits from fewer points of potential failure (no pump, no tubing with jointing) and even if there were to be a leak the dielectric fluid shouldn't pose a threat to your PC components. IceGiant backs its product with a 10-year warranty. The firm indicates this is the first of a larger line of products it is preparing for PC enthusiasts. 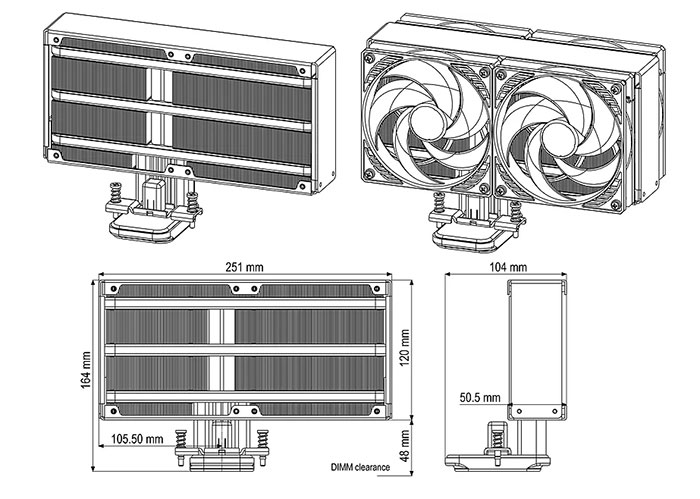 Earlier this week German tech site HardwareLuxx reviewed this cooler on a PC setup based around a mainstream Intel Core i5-10600K, as well as an AMD Ryzen Threadripper 2970WX. It fared better in cooler comparisons on the HEDT system, but its performance was noted to drop quite quickly with lower fan RPMs, and it was pretty noisy at full pelt with all four fans installed.

Posted by Tabbykatze - Wed 10 Mar 2021 11:52
Just be wary in a vertical position of it straight up ripping your motherboard out!

I remember an old Arctic Cooler jobby that was quite heavy tore off an AM3 bracket when it was being transported once!
Posted by Kanoe - Wed 10 Mar 2021 12:14
Reminds me of the Vapochill Micro CPU cooler I had years ago. Loved that cooler.

Used a similar principle with a gas but that one was picky about the install orientation and was not anywhere near as big.
Posted by trillo_del_diavolo - Wed 10 Mar 2021 12:16
Weren't they supposed to reduce weight/size before releasing to retail? Anyway, must be great for Rocket Lake.
Posted by Friesiansam - Wed 10 Mar 2021 12:43
Can't think why I should want to risk motherboard damage with this monster, rather than use a 280mm AIO.
Posted by iworrall - Wed 10 Mar 2021 13:20
Linus Tech Tips have also reviewed this cooler.