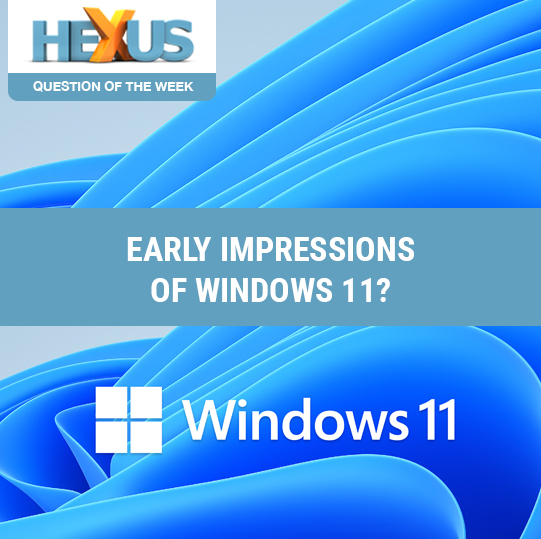 The next major version of Microsoft's hugely popular operating system is due later this year. Windows 11, a free upgrade from Windows 10, brings with it a whole host of changes, including a centred Start Menu that takes a little getting used to.

For those curious about the direction that Microsoft is taking, early pre-release builds of Windows 11 have been made available via the Windows Insider program. It costs nothing to become a Windows Insider - simply register at insider.windows.com - and you'll be able to test drive a preview build on any compatible PC, while getting a first look at upcoming features in subsequent builds.

We suspect a fair few HEXUS readers have already started putting Windows 11 through its paces, or at the very least had a quick play, and even at this early stage we're intrigued to know what you think. Early impressions of Windows 11? Share your thoughts using the comments facility below.

Based on what I have read however, I don't see it as being a huge upgrade, just a gentle evolution with improved security and a few other changes just because they can, like moving the start button…
Posted by Spud1 - Fri 23 Jul 2021 16:55
If you've followed the other thread my opinion is probably well known :)

Generally its nice, works fine, like a nice small evolution from windows 10. It does not feel like a new OS or that it's really worthly of the “11” name, but then again that doesn't really matter ;)

It has some silly annoyances - chiefly the fixed taskbar which is far too thick, and the frankly awful redesign of the context menus which makes them harder to use.

I'm sure it will get there, but hopefully MS will make it more configurable as we get closer to the final version so we can keep sensible context menus and adjust the taskbar so we don't have a load of wasted screen real estate.
Posted by QuorTek - Fri 23 Jul 2021 17:06
I don't know… but if it keep saying userfriendly when not being able to touch the interface and what is inside of easy… like advanced use… then in my opinion it would not be userfriendly at all if shielded from all that.