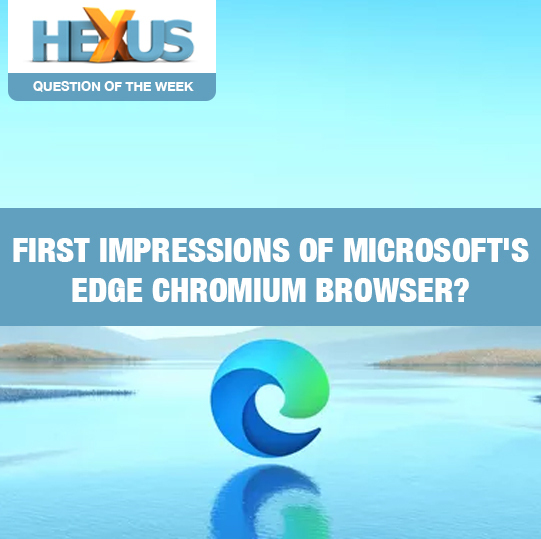 There's another web browser in town. A little over a week ago, Microsoft officially rolled out the first stable build of its Chromium-based update, dubbed simply the new Microsoft Edge.

With a trendy icon in tow, the overhauled browser promises to deliver "world-class performance with more privacy, more productivity, and more value while you browse." Initial feedback from reviewers has been positive, and with the once-humble browser having transformed into one of the world's most widely-used apps, Microsoft is under pressure to deliver an experience that lives up to the expectations of both developers and consumers alike.

Getting off to a strong start is vital, and though the update isn't expected to roll-out automatically to Windows 10 for several months, those inclined to get a move on can manually download the new Microsoft Edge for Windows or MacOS at microsoft.com/edge.

We've no doubt some of the HEXUS readership has already put the software through its paces, so for this week's question let us ask: first impressions of Microsoft's Edge Chromium browser? Share your thoughts using the comments facility below.

Posted by GamingLexus - Fri 24 Jan 2020 16:48
One feature I like so far is being able to login to the browser with multiple accounts. For example, I can login to my personal account but also login to my work O365 account and see all of my synced bookmarks. I am led to believe multiple accounts can also be operated simultaneously in Firefox (my preferred browser to date) but have not discovered how to do this.

As an average user, seems as snappy and responsive as Chrome. Obviously, far more responsive than IE and previous Edge.
Posted by Spud1 - Fri 24 Jan 2020 17:57
I switched a long time ago. Chrome has become so bloated in the past few years, and I find that my memory & CPU usage has dropped, battery life has increased on my surface, and well..it just works.

Much happier, I've no desire to return to Chrome.
Posted by LeSWiS - Fri 24 Jan 2020 18:02
I'll stick to firefox but it is not bad and the UI is good. I use it as a secondary browser when things are broken using firefox.
Posted by scaryjim - Fri 24 Jan 2020 20:43
Just switched this evening (I was using Edge as my primary browser on this laptop anyway). A couple of quick observations from a resource point of view:

Memory usage on gmail is suddenly massively lower. My gmail tab used to rapidly exceed 500MB on old Edge. Not on Chromium edge though. Hmmm….

Disk writes are ridiculous. Just like Chrome, several edge processes are continuously writing cache to disk. Poking around it seems to be something to do with cookies, although why they're being constantly updated on disk I have no idea. But I've been using it around half an hour and it's already pushed out > 1GB of disk writes. I mean, wut?!
Posted by mattburnzy - Fri 24 Jan 2020 20:49
Pretty impressed. The read aloud feature is actually really neat. When they offer more voices and less robotic ones I think ill use it a lot more. Its nice to go to a page select the text>right click>read aloud and go back to working on whatever you were working on.