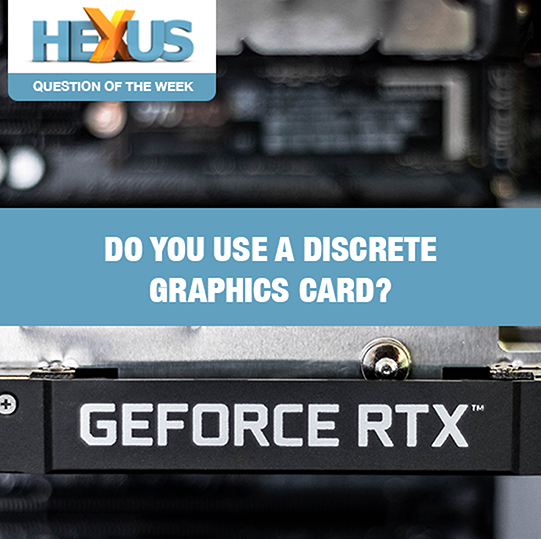 There's going to be plenty of action on the graphics front in the coming months. Nvidia is expected to introduce next-generation hardware based on the upcoming Ampere architecture, while AMD's new-and-improved RDNA2 will power not only a new wave of graphics cards, but also the eagerly anticipated PlayStation 5 and Xbox Series X games consoles.

Exciting times, and we figure now's a good time to check in on the general mood surrounding discrete graphics cards. The available hardware is more powerful than ever before, but it tends not to come cheap, and outside of high-quality gaming, you might argue that a modern IGP is good enough for your needs.

Either way, we're curious to hear your thoughts so let us open the topic by asking; do you use a discrete graphics card? Share your thoughts using the comments facility below.

I'm not a fan of APUs myself, although I can understand why it can be suitable for others and/or in certain circumstances.

I prefer having a clear separation, so that there is as much CPU performance as possible (without a portion of it being reserved for onboard graphics that isn't getting used due to having the discrete graphics card) and as much GPU performance as possible (which while it may not always be made use of to the extent of its capabilities, still has that extensive capability available if the need arises).
Posted by 3dcandy - Fri 07 Aug 2020 17:24
Depends though at the moment all of my main systems do have discrete graphics.
I'm not a huge gamer though and there is a good chance that my music pc will be upgraded with an apu (AM4) when the time arrives as it really makes little difference most of the time.It would have to beat the current cpu though which is a Ryzen 2600 and that is the issue
Posted by ik9000 - Fri 07 Aug 2020 17:43
yes. I use a GTX460 I bought in 2010. By the time I got to build my next system GPU prices had risen to obscene levels and lockdown was kicking off so I just stuck with it and saved the GPU budget. It still works for the basics and it stops me having to shell out on new games as I know I can't play them. I did wonder if the refresh cycle might bring some offers to entice me to upgrade, but nothing materialised and so I'll hold out a bit longer. And yes, I would stay discrete. Better cooling, quieter running. I don't want that load on my CPU fans. My laptop thermally throttles all the time with its onboard graphics. I've no desire for that cack storm in my main machine.