You are here:
CPU Software Features 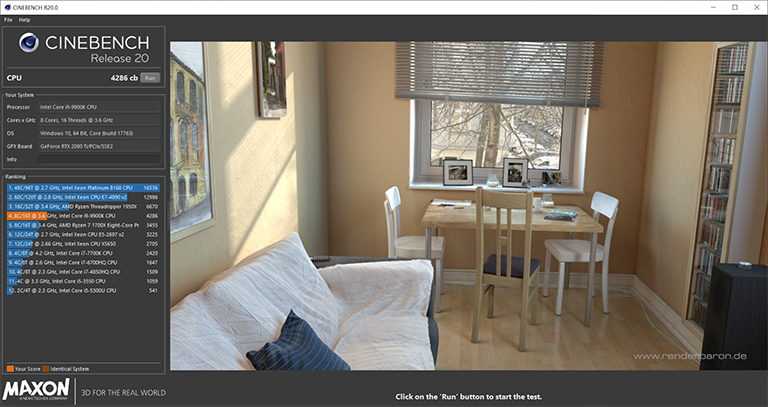 We love a good benchmark here at HEXUS HQ, and they don't come much better than tried-and-trusted Cinebench. The cross-platform test has become something of an industry standard in recent years, and this week developer Maxon has introduced an updated variant optimised for the latest advancements in modern CPUs.

It's called Cinebench Release 20 and it uses a much larger, more complex scene than outgoing Release 15, which according to Maxon requires "about 8x the computational power needed to render it," as well as "4x the memory."

We've been busy running it on every system we can get our hands on, including a rather nice Corsair One i160, which just so happens to be in the office. As per the screengrab, the Core i9-9900K returns an impressive 4,286. For this week's question, we want to know what you score in Cinebench Release 20.

The benchmark is free to download via the following links and takes little effort to run. Give it a go and post your results using the comments facility below.

It isn't that bad of a CPU, even my old 2600k scored quite well in Cinebench.