Nvidia has written to HEXUS to alert us of Rockstar's Nvidia DLSS update for Red Dead Redemption 2 and Red Dead Online. The update was delivered as part of the Red Dead Redemption Online: Blood Money expansion, which was released on Tuesday. This update included code to apply DLSS to both the online and main games.

The headlining DLSS benefit delivered alongside Blood Money is the possibility of boosting your RDR2/Online 4K gaming frame rate by as much as 45 per cent. This uplift comes to those playing the game in DLSS 'Performance Mode', and you can see an example performance-uplift chart as published by Nvidia embedded below. 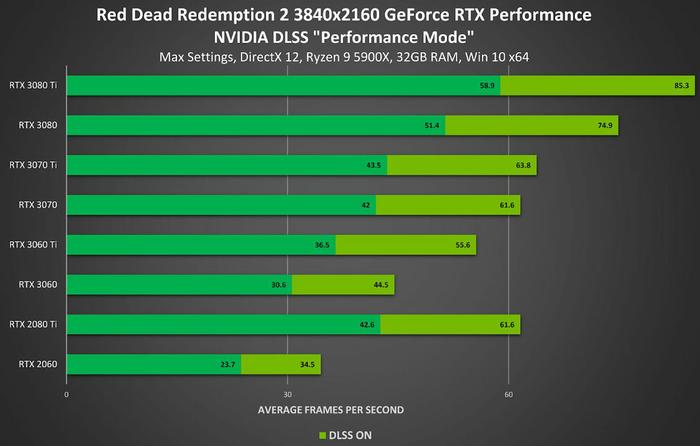 Playing the RDR2 games on Nvidia's test system, average frame rates of 60fps+ were enjoyed by all Ampere cards from RTX 3070 and better. The previous gen RTX 2080 Ti was also lifted past 60fps in these games using DLSS Performance mode. 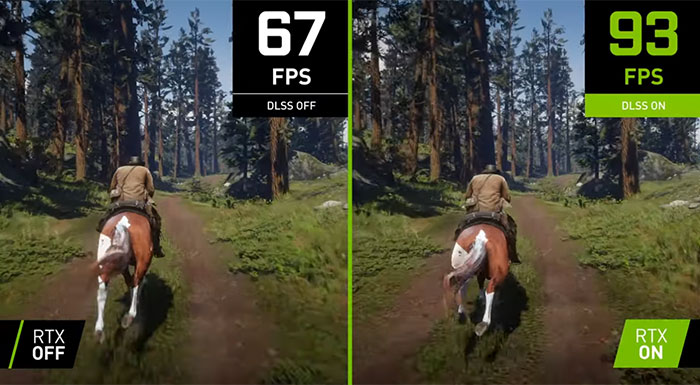 If you play these games at 1440p, Nvidia says that DLSS can bring up your average frame rates to >60fps, as long as you own an RTX 3060 Ti or better. Meanwhile, at 1080p, "all GeForce RTX gamers can experience Red Dead Redemption 2’s incredible world with max settings at over 60fps".

In other related news, Nvidia told HEXUS that Unity 2021.2 is out in beta with Nvidia DLSS support. One of the key new features in Unity is native DLSS support in Unity's High Definition Render Pipeline (HDRP) – this will make it much easier for devs to make their wares DLSS ready.

Lastly, Nvidia would like to remind folk that DLSS is supported in nearly 60 games, including top titles like Call of Duty, Cyberpunk 2077, Fortnite, Minecraft, Red Dead Redemption 2, DOOM Eternal, Rainbow Six Siege – as well as engines like Unreal Engine 4, 5 and Unity. Nvidia maintains an RTX enhanced applications list, so you can see the current state of support for features like Ray Tracing and DLSS.

lumireleon
Being an Nvidia critic for many years this DLSS 2.0 is currently the best thing to come from them. That 3060 looks promising but 2080 Ti second hand is in for me, what's the current average price for a decent one in UK?

Rubarb
I'd be more happy if they had done a AMD FSR patch as not many miners are playing games.

Due to selling my main system and missing some games I just bought myself an Xbox Series S, plays 90% of the games I used to play and I know it all works. Interestingly FSR is supposed to be coming to the xbox series s/x
Posted by Nohliife - Tue 20 Jul 2021 16:54
It may look gorgeous, but it doesn't make the title a real game.