Valve has shared three new videos featuring Half-Life: Alyx gameplay. Totalling about 10 minutes of in-game footage, the purpose of the clips appears to be to demonstrate three different motion modes available to players. I've embedded the videos within the article below for your convenience but in brief, and according to the YouTube descriptive texts, the videos show the following:

Above you can see a player using the Teleportation style of movement. Using the controllers you essentially pick a spot in your viewpoint and teleport there in an instant. This could be one way to move from the proverbial frying pan into the fire but is just one of the three solutions available for getting around the game environment in your VR HMD.

Continuous movement is one of the most common movement styles in VR, as it mimics trudging reality but it is obviously slower than the Teleportation mode. It is probably the natural mode for when there is a lot of things to do in a confined area - however, using this mode extensively is more likely to induce motion sickness.

Lastly, Shift mode is a kind of hybrid between the other two modes. You choose a location objective and then your character rapidly moves there without fade out/in. This third video highlights Shift mode in use in an intense fire fight - moving from cover to cover. Interestingly we see Alyx open a disused car door for cover in this scene.

Throughout the series of videos we see that Alyx's gloves seem to offer a 'magnetic' capability. You will see the character reach out for an item and it will be attracted to the grasping hand and then become usable. This kind of experience tweak minimises laborious actions so you can concentrate on the fun, adventure, and thrills. 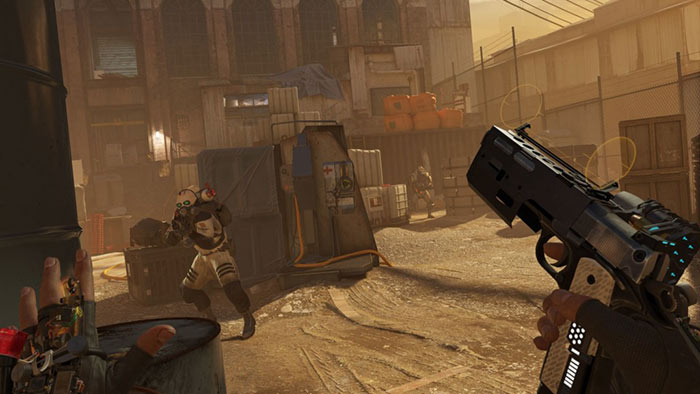 Half-Life: Alyx is scheduled for release on Monday, 23rd March and is compatible with a variety of PC VR headsets, not just the Valve Index.

Posted by Skyflier - Tue 03 Mar 2020 16:00
Looks good, the movement styles seem interesting and the Gravity gloves look like a much more practical use of that tech over the original gravity gun (as fun as it was).

It's just a shame it's VR only though and as much as I’d like to play more half-life based content (I played through HL2 & the episodes countless times) it’s still not going to get me to buy a VR setup.

VR these days is like 3D, it nice and its available if you want it. But most people don't really care and are quite happy with 2D, a mouse & keyboard or a controller. Sorry tech industry.
Posted by TonyBee - Tue 03 Mar 2020 16:59
Just watching those videos gave me motion sickness.
I definitely think VR is not for me.
Interesting tech but I will watch from afar.
Posted by Joe91 - Tue 03 Mar 2020 17:58

TonyBee
Just watching those videos gave me motion sickness.
I definitely think VR is not for me.
Interesting tech but I will watch from afar.

Have you tried it? There are certain game styles that wont give you motion sickness, but yes, other styles - particularly where you walk and turn ‘smoothly’ (the moving while changing direction bit in particular) - i.e. rather than the click and transport movement type (where you generally don't get sickness).
It is damn prohibitive from an expense point of view, however, as resolutions increase further and frame rates remain at a comfortable minimum - and expense reduces - I can really see it taking off.
Imaging the technology in another 100-200 years - headset reduced to nothing more than fully covered sunglasses, wireless (of course) and photo-realistic graphics at very high frame rates, etc. Fully interactive without wearing gloves or needing controllers. We're not a million miles away the now. For some contrast, imagine what folk from 100-200 years ago would think of today's technology. Jump 500 years forward from today and think about holographic projections / Holodeck idea. Oh yes, we'll need to behave ourselves and not become…extinct through our own actions :)
Posted by spacein_vader - Tue 03 Mar 2020 18:39
It says in game footage but you have to imagine the screen door mesh in front of it for what you'd actually see.
Posted by DanceswithUnix - Wed 04 Mar 2020 07:48

Joe91
It is damn prohibitive from an expense point of view,

TBH I think the biggest barrier these days is the amount of room you need to move around in. The CPU and GPU requirements have gone from high end to budget (I'm using a 2200G with an RX 570 gpu) and whilst I had grief mounting the cameras for my old rift on the wall and had to buy a USB3 PCIe card to reliably plug them in the recent headsets with inside-out tracking don't need any of that stuff. But I do occasionally thump the wall to my right whilst playing games!


If I can stop playing Beat Saber long enough I might give Alyx a try :D