The official CD Projekt Red Cyberpunk 2077 Twitter account poised a seemingly off-the-cuff query to the official Nvidia GeForce account yesterday evening. In a nutshell, the Twitter exchange hints that CDPR and Nvidia could be teaming up to produce a limited special edition Cyberpunk 2077 GPU. 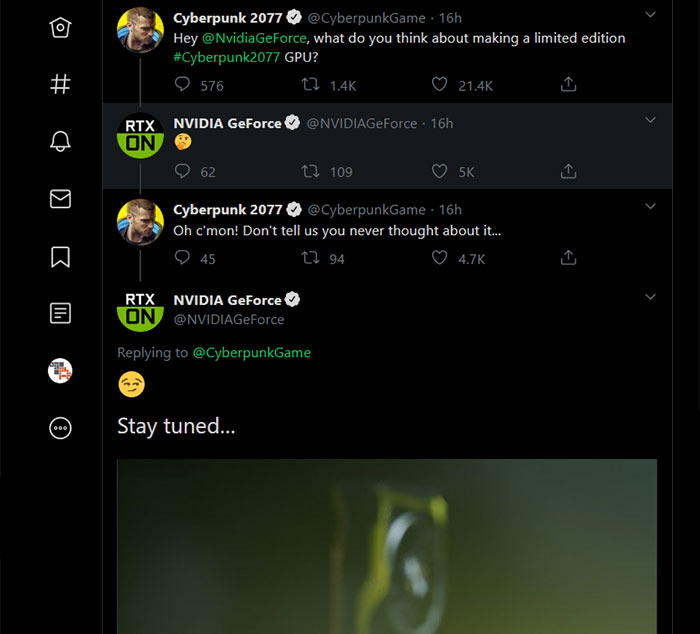 In its initial response to CDPR's (likely scripted) query about a potential GeForce RTX Cyberpunk 2077 Edition, Nvidia replied with the 'thinking face' emoji. CDPR pressed on, asking "Oh c'mon! Don't tell us you never thought about it..." Nvidia countered with the 'smirking face' emoji, and teased that we "stay tuned". Last but not least the blurry image below was posted alongside the tease. 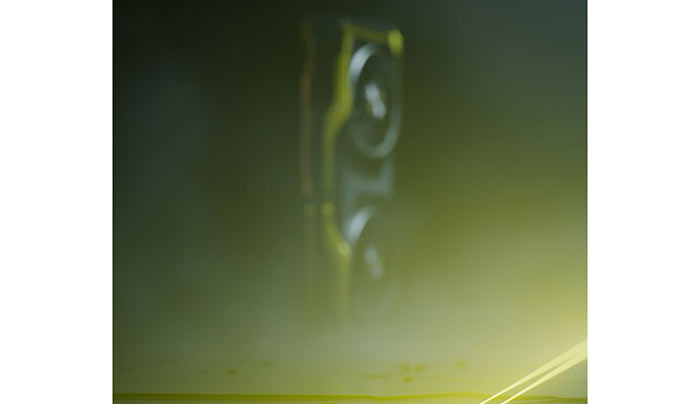 The above image looks like an RTX20 series reference graphics card from Nvidia floating in a Cyberpunk-style neon fog environment.

It is no secret that Nvidia and CDPR are working closely on Cyberpunk 2077. Last summer it was announced that Nvidia had been chosen as the "official technology partner to bring real-time ray tracing to the game". Thus, when the game arrives in September, it is expected to be delivered with RTX On real-time raytracing frills, as well as other Nvidia graphical tech.

This isn't the first time Nvidia has released a special edition graphics card in partnership with a big name game / movie franchise. Back in November 2017 it announced the Titan Xp Star Wars Collectors Editions - one styled for the Jedi Order, another for the Galactic Empire. As a reminder I've included images of these extravagant products below.

An Nvidia GeForce RTX Cyberpunk 2077 Edition would be a particularly symmetrically confected product if the graphics card sat somewhere between the RTX 2070 and 2080 in stature and was called the RTX 2077. However, that is pushing the bounds of possibility quite far - based upon these insubstantial tongue-in-cheek Tweets.

Cyberpunk 2077 will be released on 17th September this year, if there are no further delays. It isn't certain whether Nvidia will have consumer-ready Ampere GPUs available by that time.

We’ve made just 200 of these Cyberpunk 2077 GPUs, they won’t be sold, but you can potentially win one (details below). Each has a custom AL5052 aluminum shroud, with Cyberpunk 2077’s signature yellow styling, and powerful GeForce RTX 2080 Ti hardware underneath. And of course, it comes gift wrapped in a special edition Cyberpunk 2077 box, perfect for a collector’s shelf.