Activision and Infinity Ward have revealed the Call of Duty Modern Warfare Season One roadmap. In a blog post yesterday the publishers and developers provided an outline of the free content which is coming to all players, on all platforms, simultaneously - facilitating smooth cross play and cross progression. It was claimed that what has been revealed is "the biggest free content drop in Call of Duty history". 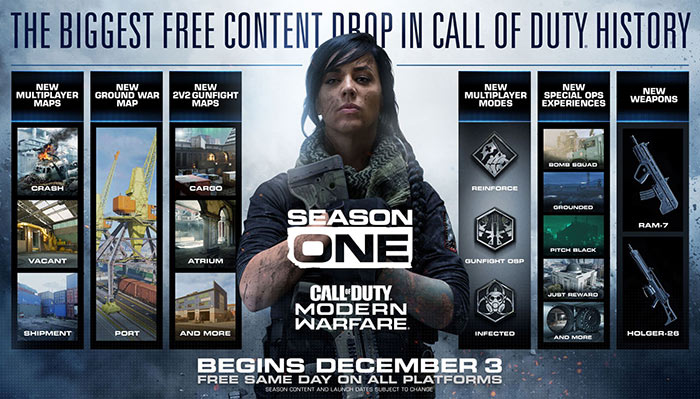 Above you can see the graphical roadmap Activision published on Twitter, but it went into textual descriptions via its blog post, linked top. In brief there are three multiplayer maps on the way as well as a new ground war map and a trio of 2v2 gunfight maps. Add to that three new modes, several special ops experiences and two new weapons - to make this quite a generous freebie for CoD:MW players.

Some content highlights are; the return of the iconic Crash map from Call of Duty 4: Modern Warfare, a single-life Reinforce Mode with teams competing to control three flags, and new weapons are always welcome in games like this. Activision and Infinity Ward will be adding the earnable Ram-7 fully automatic bullpup Assault Rifle, and the Holger-26 rifle with integrated sight rail and drum magazine. 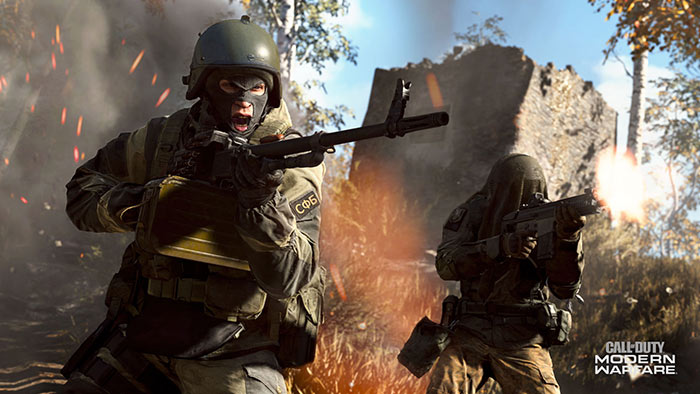 Activision will reveal more about the above content on 3rd December, as it begins to roll out. It teases that there are 100 tiers in its Battle Pass and some of the listed content will be added during Season One (not right at the beginning). Players will be able to pay-up for premium access to the 100 tiers of rewards but all those mentioned above will be free - though some require players to 'earn' the reward by gameplay.

Posted by V1nny - Wed 27 Nov 2019 16:04
Did not really like the game to begin with but got into it lately and its not that bad :)
Posted by Gentle Viking - Wed 27 Nov 2019 16:53
I tried the open beta for a few days, and i would absolutely not be able to come to terms with it when it come to multiplayer.
And i am not going to get it for a single player perspective.
If they could make it play like the first COD games i would be okay, but the series have evolved to something else and with the first modern warfare i was done with it.
Posted by KultiVator - Wed 27 Nov 2019 22:57
Nice to see the return of the classic map ‘Crash’ alongside the warehouse level (slightly tweaked to offer more cover through the central area) which is already in the 2 v 2 player map list.

Best COD for many years… good to see it return to decent form.
Posted by V1nny - Thu 28 Nov 2019 02:13
I stopped playing for a few years when all the wall riding and boost jumping came about
Posted by Gentle Viking - Thu 28 Nov 2019 08:47
I don't even know what wall riding are, and the only boost jump i know are rocket jumps i saw my M8 do in Q3.
I want to run all the time, in the games i played you could actually check a always run box in the menu, and if you jumped while running you was a little bit faster.
And i cant bother with running out of stamina, i want to play a game i do not want to simulate anything.
And i sure as hell cant bother with bending over to pick up a gun on the ground, i just want to run over it and be done with that.

That crash map from the old modern warfare,,,, i don't remember that, but looking on YT it flashed back into memory. :-)