An advert paid for by Blizzard and published in a German gaming magazine includes reference to an unannounced AAA game. Game Star's advert states that an upcoming book about artwork in the Diablo series of games contains "more than 500 artworks from Diablo 1, Diablo 2, Diablo 3 and Diablo 4." For reference, and to give further weight to this news, one of the book's contributors is senior Blizzard writer Robert Brooks and the book will be published by Blizzard Entertainment. The 250 page tome is listed at £35 in the UK (Amazon) with release scheduled for 21st Nov.

A recent report by Kotaku already flagged up the possibility of Blizzard announcing a new Diablo game shortly. This summer it asserted that Blizzard had cancelled development of a StarCraft FPS to put more resources into Diablo 4 and Overwatch 2.

Our story source, VGC, notes that Blizzard’s annual showcase, BlizzCon, will take place at the Anaheim Convention Centre in California from Friday 1st - Saturday 2nd November. Surely this is a perfect time/place to announce the game, perhaps with a trailer, demos, and release info. 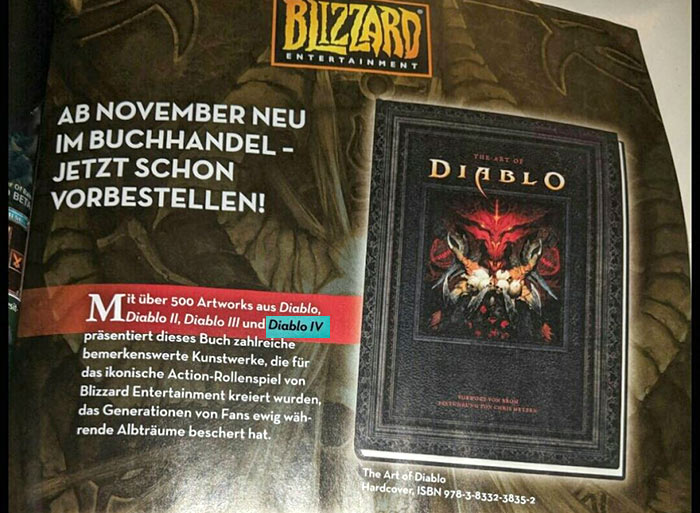 It is currently understood that Diablo 4 has been in development since 2016 and presents the gamer with a more 'gross' and 'dark' art style. Last year, in the wake of the announcement of Diablo Immortal (mobile only), Blizzard blogged about having "multiple teams working on different Diablo projects and we can't wait to tell you all about them." Now it looks like it's time to show off the fruits of this development.

Posted by aniilv - Tue 22 Oct 2019 18:17
Ah yes, Diablo 4, the mobile only game thats not available in HongKong, is always on and full of microtransactions is dead cert gonna be announced
Posted by Jonj1611 - Tue 22 Oct 2019 18:34
Aren't you getting confused with Diablo Immortal? This is not that.

Or maybe I missed the humour :mrgreen:
Posted by DevDrake - Tue 22 Oct 2019 22:27
ehh, This is expected that someday the Diablo 4 will be released (executives wants more money, aren't they?). Yet I am very hesitant to be happy about that.
I am the diablo fan. Played 1, 2 and still playing 3 sometimes. Yes, I do have some enjoyment from playing 3 even now. But… it is not a “legendary blizzard production” with their “legendary game support” its just AAA game made to make money with bad executives that actually rubbishrubbishrubbishrubbished up earning $$$ from one of the best selling games ever (mind blowing)… They rubbishrubbishrubbishrubbished up on so many aspects that I'm not really sure if I want to see what will be the Diablo 4.
Love through hate…
Posted by AGTDenton - Wed 23 Oct 2019 00:13